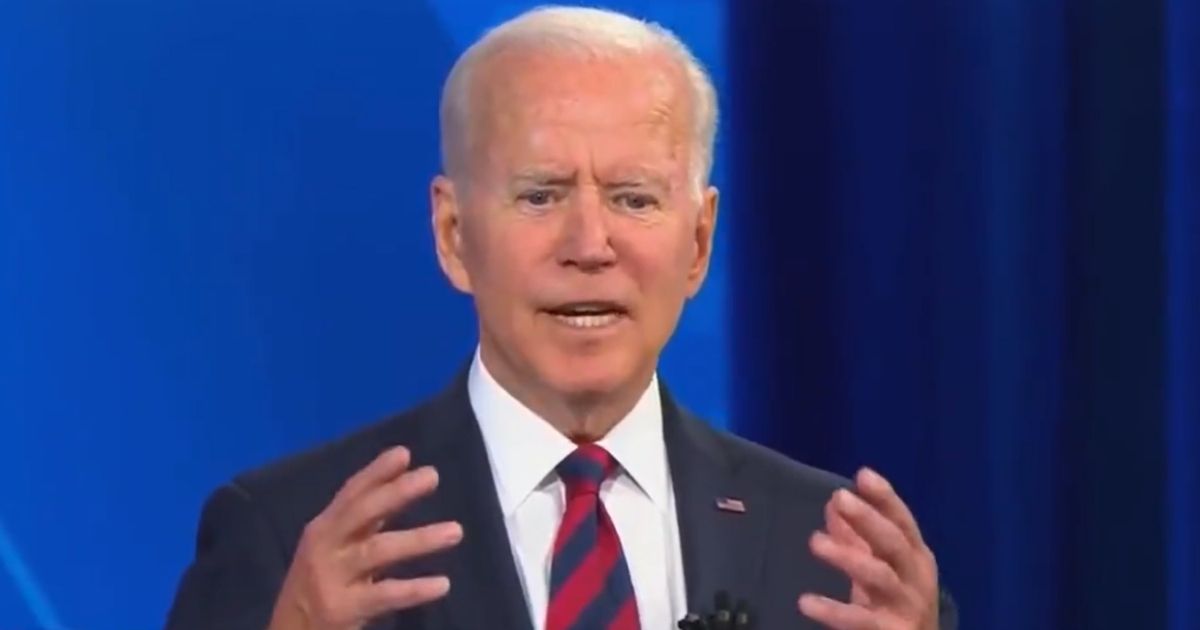 The following article, Watch: Biden Babbles About 'Aliens' and a 'Man on the Moon' When Asked About Black Vaccine Hesitancy, was first published on Flag And Cross.

I get the feeling President Joe Biden is just as tired of these interminable CNN presidential town halls as I am.

After Wednesday night’s performance, you wonder why he keeps on having them.

There were any number of genuinely outré moments from the event, which featured Biden and CNN host Don Lemon on stage at Mount St. Joseph University in Delhi Township, Ohio. Only one of them was there mentally as well as corporeally, however.

This manifest itself most acutely when Lemon asked the president how he would fix “mistrust in the system,” particularly as it pertained to vaccine hesitancy.

According to a transcript from the Cincinnati Enquirer, the CNN host lamented that “even within my own family, here I am on television every night, there is ambivalence, there’s misinformation.” How would the president convince the hapless folks whose relatives don’t have an hour to while away on cable TV every night?

Biden began by saying that, first off, “we’ve got to restore faith in government. You’ve got to get people to the point where they trust government.”

This was reasonable stuff, even if he called Don Lemon “one of the most informed journalists in the country.”

He transitioned into talking about how “with regard to your family in particular, part of it is not just that they see you on television and trust you, the people who seem to have the most impact are — you know, for that 17-year-old kid, the kid he or she plays ball with.”

“You got the vaccination? Are you — are you OK? I mean, you seem — no, it works,” Biden said to Lemon, who assented in a way that indicated he wasn’t unaware he was locked in a bad-viral moment with a guy he really likes.

That look didn’t register, apparently. “Or, you know — or the mom and dad or the neighbor or when you go to church or when you’re — now, I really mean it. There are trusted interlocutors,” Biden continued.

“Think of the people, if your kid wanted to find out whether or not there were — there’s a man on the moon or whatever, you know, something, or, you know, whether those aliens are here or not, you know, who are the people they talk to beyond the kids who love talking about it?”

Joe Biden rambles: “Whether or not there’s a man on the moon” pic.twitter.com/ljNkOXn91N

“They go to people they respect. They say, what do you think? And so they should be asking other people, the people — everything from their teachers, to their ministers, to their priests, to people that they trust,” Biden said.

You know, like the elected officials in whom he’s trying very hard to raise confidence.

Nothing Biden said for the remainder of the hour quite touched his Giorgio A. Tsoukalos-level aliens blather — although one has to think about it, which doesn’t settle the stomach. Pipped to the post was part of this answer about when children under 12 would be able to be vaccinated:

Just in case you didn’t catch that: “And the question is whether or not we should be in a position where you are — why can’t the experts say we know that this virus is, in fact — is going to be — or, excuse me — we know why all the drugs approved are not temporarily approved, but permanently approved. That’s underway, too. I expect that to occur quickly.”

Sounds like great news. If only I knew what the news was.

This alarmed enough Twitter denizens that even Glenn Greenwald — co-founder of left-leaning news site The Intercept — asked if there was “really anyone willing to step forward with a straight face and say there’s nothing wrong here?”

Is there really anyone willing to step forward with a straight face and say there’s nothing wrong here?https://t.co/YwemWerdLS

There was a bit of a gulf between those two and the rest of the morass, although there were plenty of moments that normally would have sufficed for a Biden gaffe of the day.

Here’s Biden explaining that “America’s back” for the 2 millionth time, rambling about how he vouchsafed this to the rest of the world at the G7 summit “as a Biden.”

Biden: “Those of you who travel abroad, it’s not a joke. Not a joke. Ask — you know, when I went to this G7, all the major democracies. I walked in and go, ‘America’s back.’ I’m serious, heads of state. I give you my word as a Biden. They said, ‘Are you really back?’” pic.twitter.com/AddP9ADUEI

There’s a Hunter Biden joke here, but darned if I can find it.

Here’s Biden joking that a Republican’s dog was a Democrat:

Fourth question came from a Republican college student who, after Biden flirted with her by joking that her dog was a Democrat, asked about how much is the administration concerned about inflation and will ensure the poor and middle classes aren’t left behind #BidenTownHall pic.twitter.com/hcGOMCYxT0

Of course it’s a Democrat. It wants free food and housing but considers learning to pee and poo outside hard work.

Thankfully for Biden, the people of Delhi Township, Ohio, and the greater Cincinnati area seemed just as interested in another one of these town halls as I did:

The audience for the @CNN @POTUS ‘town hall’ is all seated in forward rows. Back of the auditorium is empty. pic.twitter.com/cUFYTQEtHr

No doubt the rest of America probably had anything better to do, so I’m guessing the television ratings weren’t too much better than this.

That’s a good thing. Because regarding trusted elected officials and vaccination, when you see them on television and listen to them, the people who seem to have the most impact are — you know, for that 14-year-old kid, the kid he or she listens to the hippity-hop with. Or, you know — or the aunt and uncle or the cat lady down the street, or when you go to the local bakery or when you’re — now, I really mean it. There are trusted interlocutors.

Think of the people, after all. If your kid wanted to find out whether or not there were — there was an attack of the 40-foot-ants or whatever, you know, something, or, you know, whether those radioactive gorillas are here or not, you know, who are the people they talk to beyond the kids who love talking about it?

Sound normal to you? No? It shouldn’t sound normal when the president says something like it, either.

Continue reading: Watch: Biden Babbles About 'Aliens' and a 'Man on the Moon' When Asked About Black Vaccine Hesitancy ...