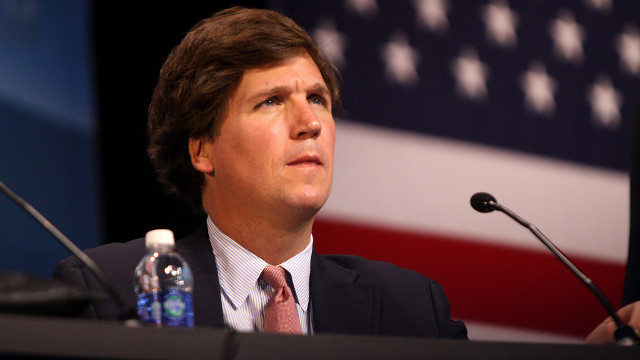 It is well understood that passion is a large part of the punditry game.  Human beings want to know that the person delivering their news is invested in the story, (for some reason), and the primetime players are all very aware of this fact.

But there are times in which the rabbit hole that they’re chasing stories down becomes too dark, too cavernous for even the most skilled orator, or the fastest on-their-feet thinkers that we have.

Sometimes things go a little far in the mainstream media, and the nation at large leers in to rebuke the extremes.

Tucker Carlson may very well be having one of these moments.

“On Tuesday, [House Speaker Nancy] Pelosi will call on police officer Harry Dunn. Dunn will pretend to speak for the country’s law enforcement community, but it turns out Dunn has very little in common with your average cop. Dunn is an angry, left-wing political activist,” said Carlson, referring to Dunn’s forthcoming testimony in front of the Congressional committee converged to investigate the deadly Jan. 6 riot.

He pointed to social media posts Dunn, who is Black, has made about racism before.

Dunn’s lawyers, David Laufman and Mark Zaid, released a statementWednesday night that read, “Tonight Fox News allowed its host Tucker Carlson, who has not served a day in uniform, whether military or law enforcement, to criticize the heroism and service of African-American U.S. Capitol Police Officer Harry Dunn. Our client has served 13 years in law enforcement and on January 6, 2021, fought against an insurrectionist violent crowd — no doubt many of them Carlson’s supporters — to protect the lives of our elected officials, including Vice President Pence.”

And, yes, Tucker is being paid to conjure controversy, and to keep people tuned in, so this is all very much in his wheelhouse.  The issue here is the muddying of the line of who’s a worthy police officer and who’s some political extremist with a badge at a time in which our nation’s police officers need as much attention and respect as we can muster.

As usual, Andrew West can’t get it right. We know the Capitol Police were involved in creating the conditions of the protest that Pelosi and other Marxist idiots have labeled an “insurrection” – all for the purpose of further attacking Trump and Trump supporters. West is such a Never-Trump activist that he insists on characterizing some of the Capitol police – such as Lt. Michael Byrd, who murdered unarmed, non-violent Ashli Babbitt – as paragons of virtue, as heroes whom we must honor simply because they are part of the Thin Blue Line (as was I when working as a… Read more »

BTW, I can’t imagine what makes West think that Dunn is any more deserving of respect than Lt. Michael Byrd, who has been identified as the Capitol Police agent who murdered Ashli Bennett. As a former LEO myself, I won’t disparage the average Capitol Police officer, but their job is such that they certainly don’t normally face the same dangers and stresses experienced by most real street cops or federal cops such as U.S. Marshalls, or DEA agents. Capitol Police normally act more as security guards and perhaps occasionally as babysitters for members of Congress (such as Pelosi), rather than… Read more »