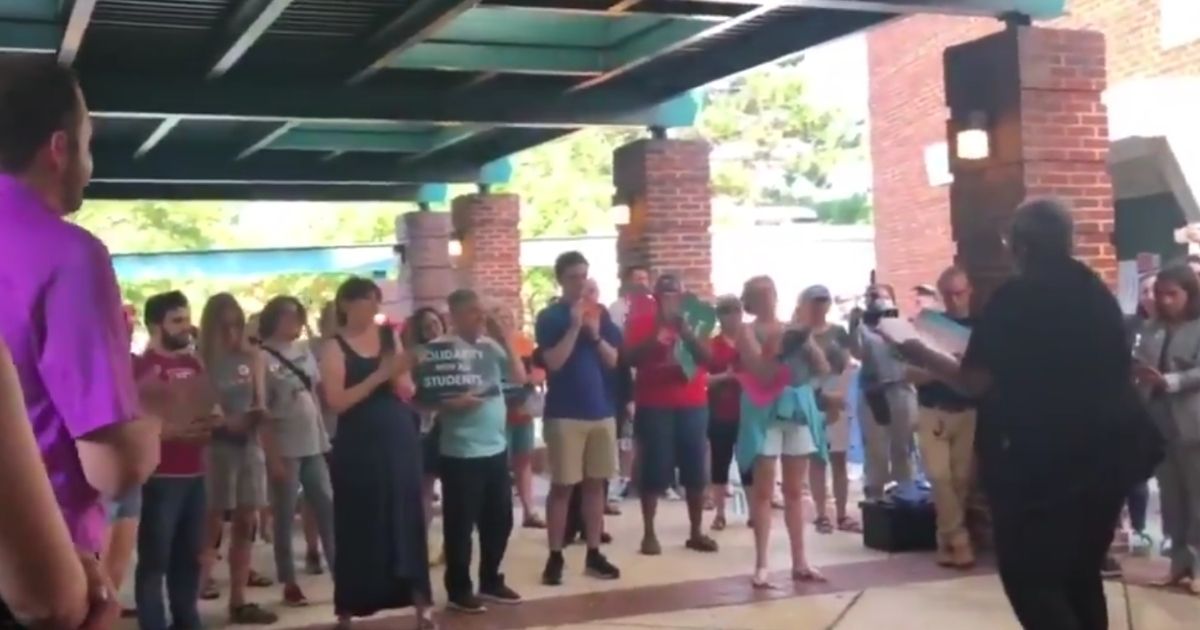 The following article, Crowd Applauds After PTA Leader Shouts 'Let Them Die' When Referencing CRT Opponents, was first published on Flag And Cross.

And here I thought things were bad regarding critical race theory in schools in Loudoun County, Virginia.

I mean, they still are, with citizens getting arrested after the school board in the suburban D.C. county shut down a meeting early because they didn’t like the pushback, or a mother who survived communist China having to lecture the leftists on the board about what oppression really was.

I’ll say this much about the crazies from Loudoun County, though: Unlike in neighboring Fairfax County, no major school leaders have been caught on video seeming to wish death upon opponents of critical race theory. Yet, anyway.

According to CNN, Michelle Leete — a leader of the Virginia Parent Teacher Association and first vice president of the local chapter of the NAACP — made the remarks at a rally on July 15. Outside a Fairfax County School Board meeting, a rally billed as being “In Support of Student Health and Public Education,” advertised by the Fairfax Democratic Committee, was being held amid a group of community members protesting critical race theory in the classroom.

Critical race theory wasn’t on the docket that night, according to CNN.

However, the encroachment of CRT praxis into classrooms across the country has been a bone of contention among parents groups which object to the subjective Marxist-related school of thought which teaches, at a basic level, that the United States has been founded upon so-called “systemic racism” and that those systems, being inherently poisoned, must be torn down.

At the end of her speech, Leete took a moment to call out her opponents.

“So let’s meet and remain steadfast in speaking truth, tearing down double standards, and refuting double talk,” Leete said. “Let’s not allow any double-downing on lies. Let’s prepare our children for a world they deserve.

The speech was caught on video by anti-CRT campaigner Asra Nomani — and that wasn’t the only incriminating thing from it.

Many asked me who is clapping when Michelle Leete says, “Let them die!” about folks with different viewpoints. In my work as an independent journalist, I investigated. My findings: @FairfaxDems organized the protest. Its chair @BryanGrahamVA applauds, “Let them die!” Thread pic.twitter.com/c2vRWnthu6

At the end, Fairfax Democratic Committee chairman Bryan Graham — the one in the bright pink shirt — nodded and applauded over the “let them die” line, according to Fox News. He wasn’t the only one, but he is the local Democratic Party suzerain. As of Thursday, he still is.

The rest of the crowd shouldn’t be let off the hook, however. “Let them die!” Cheers! This is disgusting stuff, and it’s repeating itself over and over.

You may be shocked to hear this — shocked, I tell you! — but Leete says she obviously didn’t mean to let the anti-critical race theory protesters die!

“I will certainly admit, it was ineloquently stated and with a pause for the applause, the timing was off, but ‘Let them die’ was referring to the ideals that show a disregard and lack of support for our teachers who have a truly difficult job to do even without a pandemic,” Leete told CNN.

Except it wasn’t, at least as Leete phrased it. In that run-on sentence of a length usually not seen unless you’re translating Kafka out of the original German, “let them die” grammatically refers to “this off-key band of people that are anti-education.”

Even admitting “it was ineloquently stated,” broken construction can’t account for misinterpretation, at least not to this hearer.

It’s a bit like former Alabama Gov. George Wallace telling a reporter later on in life, “All right, see, when I said ‘segregation now, segregation tomorrow, segregation forever,’ what I was really talking about was the ideologies of the two political parties — not the races, you hear? Makes perfect sense now, don’nit?”

No. The Virginia PTA wasn’t necessarily buying Leete’s explanation, either, and asked her to resign — which she did.

The NAACP doesn’t uphold the same values, alas, issuing a statement on Sunday asserting that it’s “firmly” with Leete and “her work in the past, present and future.”

The group said it “does not condone or support violence of any kind, whether we agree with an individual’s ideas or not. We believe in peaceful demonstrations and activism in order to achieve social justice and equity. But we will always stand in opposition to anti-diversity and anti-equity rhetoric, and any ideas or policies that further an inequitable agenda.”

The association added her speech was mostly about preparing “our children for a better world by denying space to rhetoric, ideas or narratives that threaten the world we want to leave our next generation. This is abundantly clear when you consider the entirety of her speech, instead of simply the last seconds of it.”

Her speech was about squelching opposing viewpoints and the only real problem the NAACP had was that part about “let them die,” but that was all out of context. I append no comment.

So, at least for these past two weeks, Fairfax County takes the crown for most insane critical race theory piffle, all thanks to a liberal functionary who wants to see opponents of critical race theory die. (But not really! She swears! She didn’t mean it that way!) The only surprise, unfortunately, would be if Loudoun County doesn’t retake the crown sometime soon.