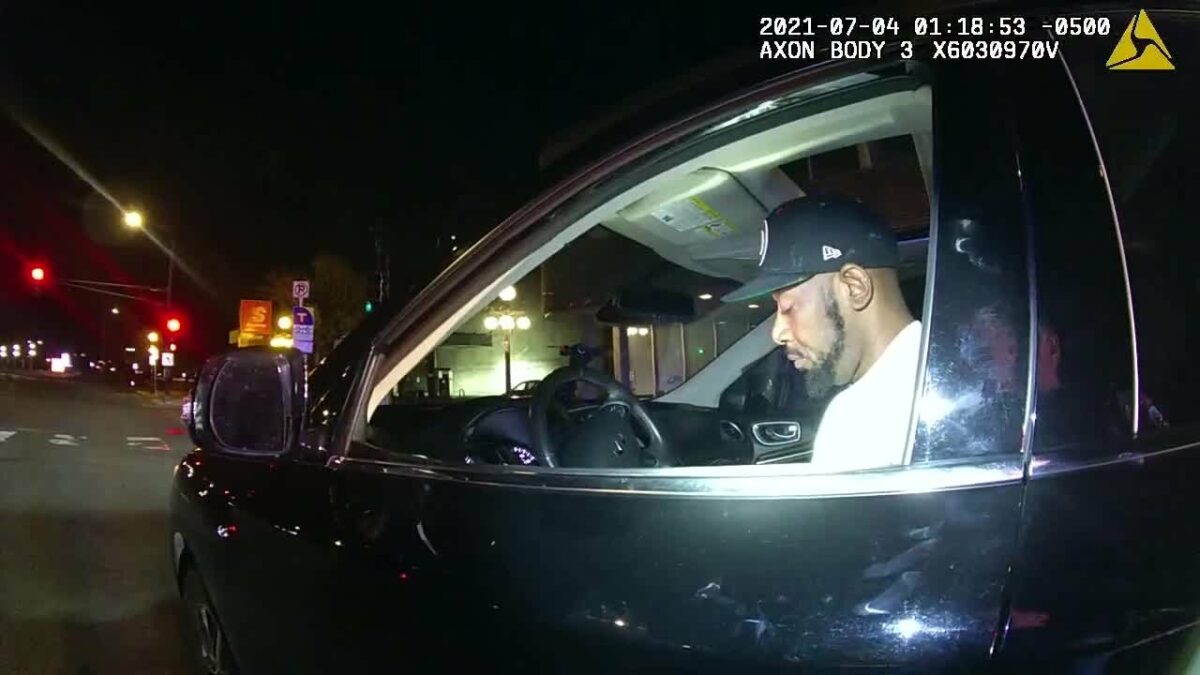 The following article, State Rep That Accused Cops of Being Racist Has Been Accused of Punching, Hitting and Choking Women, was first published on Flag And Cross.

A Minnesota state representative who accused a police officer of being a racist after he was pulled over in a routine traffic stop and treated with the utmost civility is in the hot seat after a local news station’s quest to determine if he was even legally qualified to serve in his district uncovered a disturbing reported history of particularly egregious domestic abuse involving several women.

In two of these alleged cases, the now-lawmaker beat and then exposed himself to the women and their small children and demanded sexual contact.

Feel free to take a sec to process all that. You’re going to need the mental energy, trust me.

Minnesota Gov. Tim Walz and top leaders from the state’s Democratic and Republican parties are now calling for Democratic state Rep. John Thompson to step down as the alleged cases have been revealed.

While an attorney for Thompson said his client adamantly denies the incidents ever took place, four separate police reports detail four alarmingly similar cases of despicable abuse of women and behavior in front of young children. So, it would certainly be remarkable if all of the cases were fabricated … but this is actually what he is now claiming.

Here’s the backstory: On July 4, Thompson, who was elected in 2020 and is now serving as a St. Paul representative in the state House, was pulled over by an unidentified police officer who noticed he was missing a front license plate and speeding.

A few days later, at a rally for Philando Castile, whose shooting death during a traffic stop in 2016 was a focus of much of the year’s Black Lives Matter protests, Thompson recounted his experience of being cited for “driving while black.”

“We’re still getting ‘driving while black’ tickets in this state and, in fact, in St. Paul,” he declared at the event on July 7, as reported by KSTP-TV.

His side of the story, however, was undermined significantly once the police department released body camera footage showing that the officer who pulled him over acted with total civility as Thompson repeatedly and loudly accused him of racially profiling.

Johnson was ticketed, it turned out, not for “driving while black,” but for driving with a suspended license.

What’s more, he also presented a Wisconsin ID to the driver, which he had renewed in November 2020, according to KSTP. The problem was, this is the same month he was elected to represent a city in Minnesota. According to state law — the state in which he now serves as a lawmaker, that is, Minnesota — he is legally required to have resided in his district at least 30 days prior to seeking election.

Well, this is why things have since gone significantly downhill for the provocative lawmaker.

KMSP-TV, while attempting to verify whether Thompson was qualified to serve in office, discovered the gut-wrenching police reports which allege that he beat, choked, verbally abused and exposed himself to women, in some cases in front of small children.

According to police reports viewed by the outlet, the incidents occurred between 2003 and 2009 in Wisconsin and Minnesota.

In the first case, in 2003, Thompson was arrested after allegedly striking his girlfriend in the face in front of her 5-year-old daughter in a public parking lot in Superior, Wisconsin.

“Thompson fled the scene and resisted arrest when he was found a short time later,” KMSP reported, noting Thompson later pled guilty “to a reduced charge of disorderly conduct and resisting arrest.”

In 2004, he reportedly attacked the same woman at her home and attempted to choke her with a phone cord, beat her and threw her onto a table as she tried to call 911, breaking it.

“I’ll choke you until you can’t breathe anymore,” he allegedly told her.

Three small children were present for this alleged horror show: the same daughter and Thompson’s own two sons. The girl’s mother also claimed that Thompson had verbally abused them as well, saying, “F*** you, f*** your daughter, I hope you both die.”

The woman and child, who were said to be homeless and knew no one else in the town, were taken to a domestic abuse shelter. The case was also referred to local Child Protective Services and to the Dakota County Attorney for possible charges.

In 2009, St. Paul police received a domestic violence call again involving Thompson, who was allegedly fighting with two women over a cellphone he had received from “another girlfriend.” It is unclear if this was the same woman involved in the Wisconsin incidents.

In this case, Thompson allegedly revealed himself to a woman and two small children, saying, “I’m the man, you can all s*** my d***,” which he denies ever happened. Charges were never filed.

In the final alleged incident, in 2010, police responded to an assault that KMSP noted involved “a different woman.”

In this case, the station reported, “the victim said she had been with Thompson for 11 years and they have two children together.”

Again, Thompson was accused of having exposed himself, in this case telling the woman to “kiss the tip.” This reportedly happened “in front of relatives and children.”

By the way, remember his suspended license — the basis for the citation that Thompson tried to turn into naval-gazing publicity to suit his racially charged narrative?

Yeah, it was reportedly suspended because he failed to pay child support, perhaps to the mother of one of these children that he allegedly exposed to both despicable misogynistic violence and his own genitalia.

He also reportedly attempted to choke the woman in 2010, telling her, “I’ll choke you until your voice box stops,” as she told police.

In this case, the Ramsey County Attorney opted not to file charges “due to several issues, delayed 911 call, poor witness info, (and) victim stated she was fired up and doesn’t remember who attacked who first,” according to the police reports.

Thompson’s wife — yes, he is married — is now claiming that she doesn’t “recall” ever making accusations against her husband and was never a victim of any such attack, WCCO-TV reported.

“Mr. Thompson’s wife further does not recall and does not believe she ever made such allegations,” his attorney, Jordan Kushner, said in a statement. This is a really interesting choice of words.

Kushner is currently representing Thompson in a completely separate case, as it happens; he is currently on trial in Hennepin County for disorderly conduct charges involving a visit he made to the North Memorial Hospital, when the hospital was placed on lockdown after people outside were “fighting, banging on windows and trying to get in” and the lawmaker was asked to leave.

Thompson is adamantly claiming the allegations against him are false, declaring he “challenges the authenticity of the police reports.”

“The police reports are a product of the campaign to silence an [African-American] man who speaks out against powerful and abusive interests, and not the product of any effort to uncover truth,” his attorney said in a statement, also stating that his client believes that police doctored reports involving Thompson.

I bet he does.

If this is the case, and, as he would have us believe, law enforcement is so racist a black man can’t even drive down the street without being unfairly profiled and targeted, why on earth is he still walking the streets — much less driving around freely — after “doctored” allegations like this?

If it were so easy to frame a black man, why on earth isn’t he in prison?

Far more chillingly, if these reports are not doctored and these incidents all took place — which considering the consistency between them, seems far more likely — why on earth isn’t he in prison where he undoubtedly would belong?!

Black or white, society should certainly never condone a single move made by a man like this, much less their continued position as a public servant.

Continue reading: State Rep That Accused Cops of Being Racist Has Been Accused of Punching, Hitting and Choking Women ...