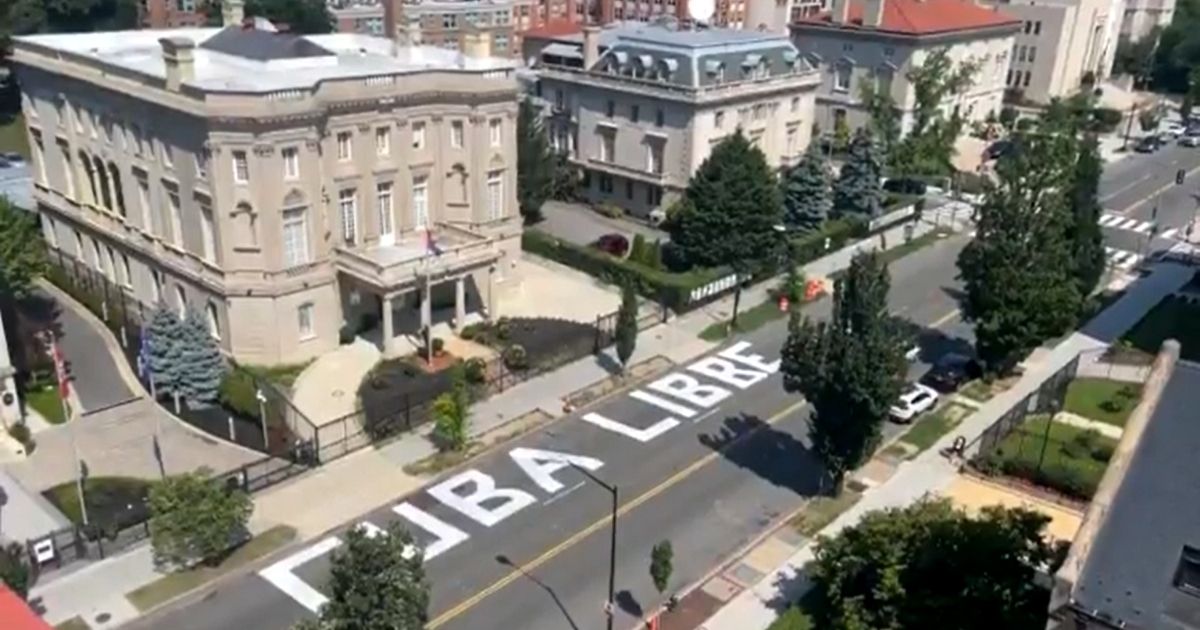 Pro-Cuban freedom activists who painted a street mural in Washington in opposition of communism had their slogan removed by Democratic Mayor Muriel Bowser on Tuesday.

Their stance was apparently the wrong kind of activism for Bowser, who last summer sanctioned a two-block “Black Lives Matter” mural near the White House.

The words “Cuba Libre,” or “Free Cuba,” were painted near that country’s embassy in D.C.

Someone left a message in front of #CubanEmbassy in #washingtonDC #CubaLibre #SOSCuba pic.twitter.com/We9v3xjfE6

In light of recent protests against the human rights abusers in Havana, the painting seemed appropriate.

But Bowser ordered the pro-freedom slogan to be removed, and it didn’t take long before “Cuba Libre” was a memory, according to The Washington Free Beacon.

By Tuesday evening, the mural and been washed away.

“The ‘Cuba Libre’ painting on the street was unauthorized, so DPW crews power washed to remove it,” Erica Cunningham, public information officer for the D.C. Department of Public Works, told the Free Beacon.

“We know what’s going on in our country. There is a lot of anger. There is a lot of distrust of police and the government,” Bowser said last June, The Associated Press reported. “There are people who are craving to be heard and to be seen and to have their humanity recognized.”

“We had the opportunity to send that message loud and clear on a very important street in our city,” she said.

What was Bowser’s message for anti-communists? Be gone.

Black Lives Matter is a Trojan horse for Marxism and always has been. Remember when the organization posted this after the death of Cuban dictator Fidel Castro?

A great many Cuban people don’t trust the police or government. These are people who are literally craving to be seen and heard following six decades of abuse, starvation and killings.

They at least had the opportunity to be on an equal footing with the Black Lives Matter activists when it comes to being seen and heard.

But pro-Cuban freedom activists are on the wrong side of the root issue, which is communism. Black Lives Matter and those who support the group wish to radically transform this country. They want D.C. to look like Santiago de Cuba.

The pro-freedom movement has had enough of authoritarianism. Those who painted the mural in front of the Cuban embassy know the evils of communism.

Unfortunately for those brave people willing to speak out, the Black Lives Matter organization, Bowser and other high-profile leftists are just now getting started. Their movement directly counters the one being supported by the Democratic Party, and so it was washed away.

So – how hypocritical are DemocRAT politicians? When are the millions of uninformed Dem voters going to learn?!