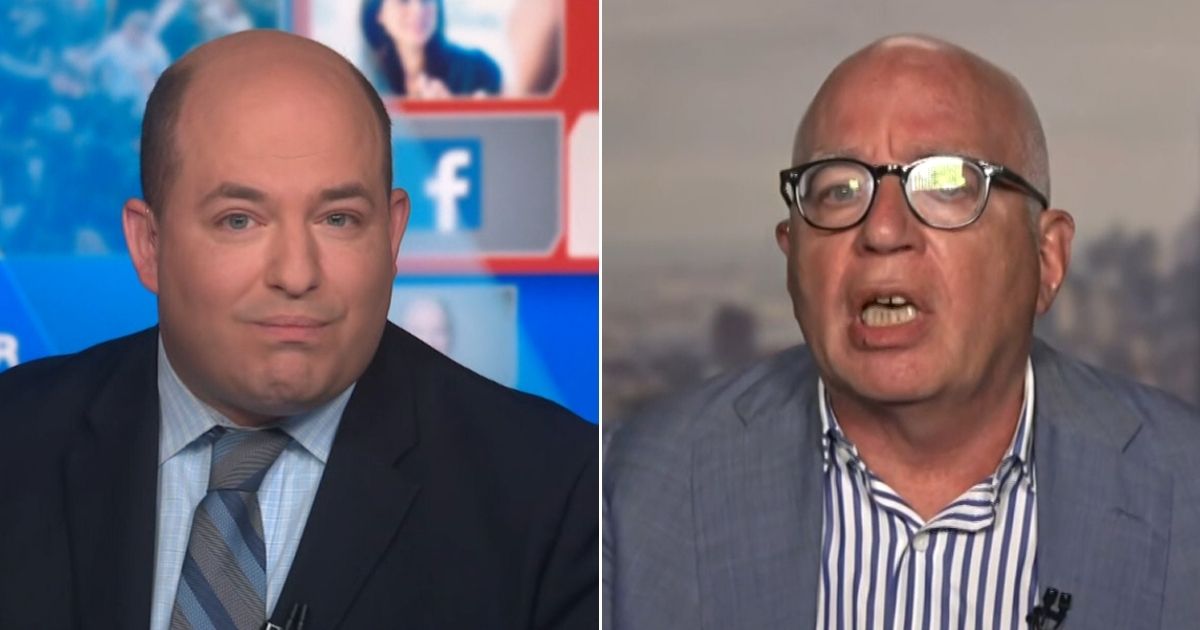 The following article, Priceless Video: Brian Stelter Gets Cut Down to Size During Outrageous Ambush on His Own Show, was first published on Flag And Cross.

CNN host Brian Stelter got roasted on his own show Sunday by his guest, anti-Trump author Michael Wolff, who torpedoed the left-wing pundit as a sanctimonious windbag who pushes fake news.

“I think you yourself, you know, while you’re a nice guy, you know, you’re full of sanctimony,” Wolff said on “Reliable Sources.” “You know, you’ve become part of, one of the parts of the problem of the media.

“You know, you come on here and [you think] you have a, you know, a monopoly on truth. You know, you know exactly how things are supposed to be done. You know, you are why — one of the reasons people can’t stand the media. I’m sorry.”

A red-faced Stelter disingenuously laughed and said, “You’re cracking me up.”

Stelter asked, “So what should I do differently, Michael?”

Wolff suggested that Stelter listen more and talk less if he wants to be taken seriously.

“You know, don’t talk so much. Listen more,” Wolff advised. “You know, people have genuine problems with the media. The media doesn’t get the story right. The media exists in its own bubble.”

Wolff continued his smackdown by blasting Stelter and CNN for attacking former President Donald Trump around the clock in a desperate bid for ratings.

“I mean, that last segment that I just had to listen to, of all of the people saying the same old stuff,” Wolff lamented. “Also, you’re incredibly repetitive. It’s week after week. I mean, you’re the flip side of Donald Trump.”

The irony is that Wolff despises the former president and has written three anti-Trump books, and even he’s disgusted by CNN’s nonstop vitriol.

When Stelter insisted that he and his network are merely trying to helping their viewers “figure out what is real,” Wolff told him not to flatter himself.

“Most people don’t want to turn to Brian Stelter to tell us what’s real. I’m sorry,” he said.

A defensive Stelter then asked Wolff why he comes on CNN several times a week if he has such disdain for the network.

Wolff replied that — like CNN — he’s merely using the platform to make money.

On Monday, Fox News host Greg Gutfeld mocked Stelter on “The Five,” where he ridiculed the CNN host as a “roly-poly guacamole gossip goalie” who deserved the verbal beating he got.

“How embarrassing,” said Gutfeld, who frequently lampoons CNN. “Good thing it happened on CNN so no one saw it.”

He said Stelter will probably replay that mortifying interview in his mind for years to come, wishing he had said something clever instead of cackling like a hyena.

“You know Brian is going to replay that segment in his head over and over again for the next four years with different responses, and probably get better ratings,” he said.

This is not the first time that Stelter has been humiliated during a live TV broadcast. In June, a stream of callers derided him and CNN as liars and propaganda ministers during a C-SPAN interview.

One caller said: “I would like to ask Brian to, on national television, admit he and his network are a bunch of liars about Donald Trump.”

Another caller remarked, “CNN is just something that’s just a joke. It’s a joke.”

A third caller said, “Mr. Stelter is the biggest minister of misinformation I have ever heard.”

One caller asked, ‘I was just wondering if you still feel like Michael Avenatti is the greatest thing in the world and should run for president of the United States. My suggestion is, whatever CNN says, do the opposite and you’ll do fine.’ https://t.co/CG3kRWBRNH

These embarrassing incidents should serve as a wake-up call for both Stelter and CNN that their jig is up because the public now realizes they’re partisan political activists masquerading as “journalists.”

Continue reading: Priceless Video: Brian Stelter Gets Cut Down to Size During Outrageous Ambush on His Own Show ...