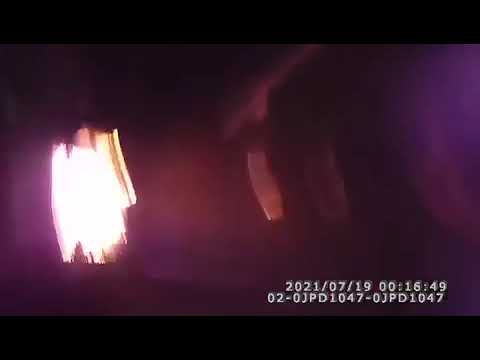 Staring into the glare of raging flames and surrounded by fear-laden voices, police officer Mark Conklin did what had to be done to save lives.

Conklin, a member of the Jamestown Police Department in Western New York, was praised Monday for his heroics when a routine shift turned into a life-saving rescue.

“While handling a call for service on Baker Street, Officer Mark Conklin was alerted to a possible house fire on William Street. Without hesitation, Officer Conklin ran to the scene where he found a house engulfed in flames with children and an adult trapped in the upstairs of the residence,” he wrote.

“While requesting the Jamestown Fire Department over his radio and standing next to extreme heat, Officer Conklin directed the trapped occupants to jump from the upstairs window and proceeded to catch them.”

Video from Conklin’s bodycam footage shows the police officer running to the flames while trying to get the address so that he could dispatch firefighters.

According to WJET-TV, five people were still in the house when Conklin entered.

The video shows the house fully engulfed in flames. Conklin briefly enters the house and helps those on the first floor to safety.

He helped those on the first floor escape before going outside.

Two people identified by WJET as a mother and child were trapped on the second floor.

With flames barring their way, Conklin called on them to save their lives by jumping down into his arms.

“Jump, jump, I got you. I got you!” Conklin called as the first person to be rescued leaped to safety.

UPDATE: Body camera footage from Jamestown Police Officer Mark Conklin shows that he helped rescue several children and an adult who were trapped upstairs inside the house on Williams Street that caught fire early this morning. https://t.co/bk5snHN6Pi pic.twitter.com/IBjmk7xDgm

“I can say that I have seen many examples of heroism over the years by officers. After watching the video of this incident and speaking to others involved, I can say that the actions of Officer Conklin were, to say the least, one of the most outstanding examples of bravery, heroism, and exemplary service I have seen,” he wrote.

No injuries were reported among those rescued. The cause of the fire had not been released as of Monday, according to WKBW-TV.