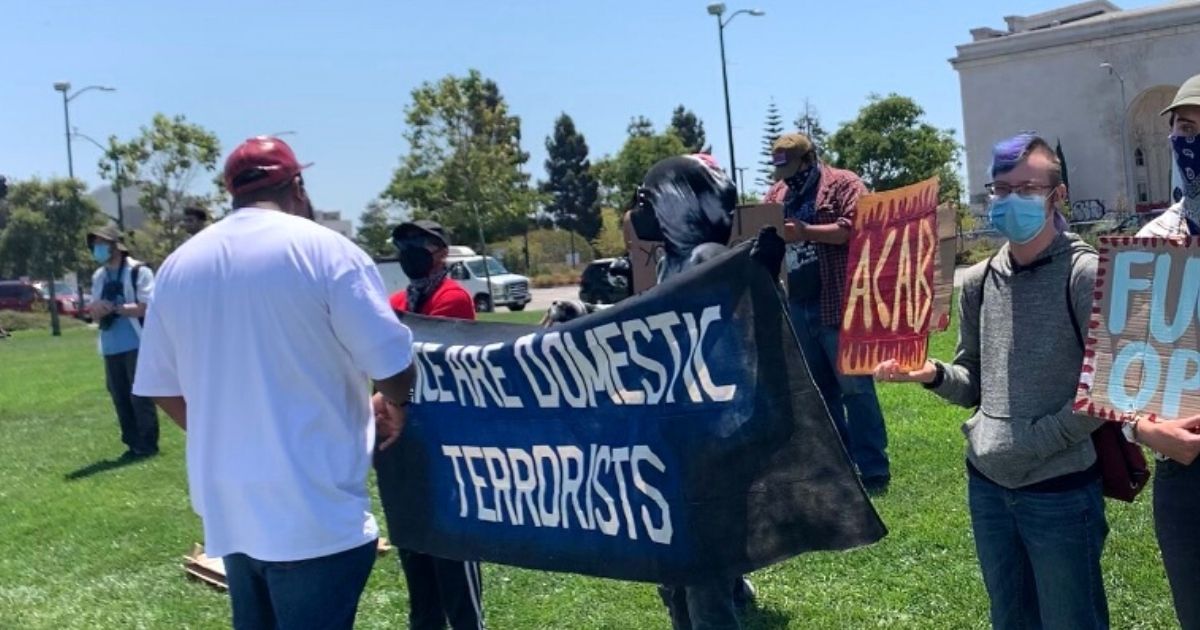 The following article, Reporter Looks Around Pro-Police Rally, Has 'Surreal' Moment When He Sees 200 Black Families, was first published on Flag And Cross.

The establishment media has been all-in on the narrative that African-Americans are clamoring for politicians to boot police from their neighborhoods.

These leftists have championed cities that defund their police departments even as crime rates skyrocket in those areas — but, we are told, black people feel safest when the cops are gone.

However, one reporter finally saw through that lie when he witnessed what he called a “surreal moment” in Oakland, California.

Lee Fang, an investigative journalist with The Intercept, was covering the pro-law enforcement “Stand Up for a Safe Oakland” rally at the city’s Lake Merritt Amphitheater on July 10.

He noted that hundreds of mostly black supporters not only showed up en masse to back the blue but some of them also schooled what he called a handful of “white antifa protesters” who were insisting that police were the problem.

“Surreal moment in Oakland. About 200 mostly black families rally with police to call for an end to the epidemic of gun violence,” Fang tweeted from the event.

“Mothers at the stage mourning recently murdered children,” he said about the names of the crime victims being read. “In the back, less than a dozen mostly white antifa protesters assembled to jeer them.”

Surreal moment in Oakland. About 200 mostly black families rally with police to call for an end to the epidemic of gun violence. Mothers at the stage mourning recently murdered children. In the back, less than a dozen mostly white antifa protesters assembled to jeer them. pic.twitter.com/uuE9Sohhkm

The rally was organized by Oakland Police Chief LeRonne Armstrong after the Democrat-run city diverted $18 million from his department to fund its violence prevention social services initiatives.

Last June, Democrats and other leftists on the City Council voted 7-2 to “partially defund” police, though Oakland Democratic Mayor Libby Schaaf surprisingly broke with her party and opposed the measure.

The results have been catastrophic for the already-beleaguered city, so much so that Oakland ran out of ambulances to transport the many shooting victims on Independence Day.

According to KTVU-TV, Armstrong’s rally featured a coffin and 71 white flowers, each representing a person killed by violence in Oakland this year. That figure somehow didn’t sway the Oakland-based Anti-Police Terror Project from staging a counterprotest.

But some black participants at the pro-law enforcement rally finally set the protesters straight.

“Several #Antifa, who appear to be all white, showed up to ‘protest’ by drowning out mostly black speakers who were naming and remembering homicide victims,” is how the AntifaWatch Twitter account described the confrontation.

WARNING: The following videos contain graphic language that some viewers will find offensive.

Several #Antifa, who appear to be all white, showed up to “protest” by drowning out mostly black speakers who were naming and remembering homicide victimspic.twitter.com/rYleOwDCWd

“Not when black children are dying in the street every day,” another black woman chimed in.

When the voice of a protester insisted they’re dying “at the hands of the police,” a black gentleman jumped in to charge, “That’s a lie, that’s a lie.”

The man said the rally was meant to be something “positive” for the community.

The man said they were there to “save our people” at the rally for police. “You are not our people. Get the f*** out,” the man said.

Though at first blush it seems their words were unnecessarily racially charged, it’s precisely the appropriate message for these white protesters who so often think they know what’s best for black neighborhoods (talk about a white savior complex).

In the name of equality and public safety for minority communities, they support and advance initiatives that take police off the streets where they’re needed most.

The predictable result of going along with the anti-police movement is soaring crime, a fact that has made the initiatives such an unmitigated disaster for these communities — so much that Democrats are now pretending it was never their idea in the first place.

While the anti-police movement is certainly a mixed bag of grifters, race-baiters and garden-variety sociopaths, the worst seem to be the white antifa punks who burn down and terrorize neighborhoods with large minority populations under the Black Lives Matter banner and in the name of the late George Floyd.

They’re emboldened by the white liberal elites who insist white people wield tremendous power over black people and that systemic racism is so deeply embedded in society that it can only be solved by burning down the system completely.

Meanwhile, this self-flagellation on the part of white people drives more and more insane policies that do more harm to minority communities than even legitimate police violence could ever do.

But Fang apparently was stunned that black people would want the same guarantee of security and order that law enforcement provides to people of every race.

He may have been surprised by that reality, but what’s really shocking is that the left’s anti-police narrative has gained any traction at all — though maybe this confrontation and the Democratic Party’s attempt to distance itself are proof that the jig is up.