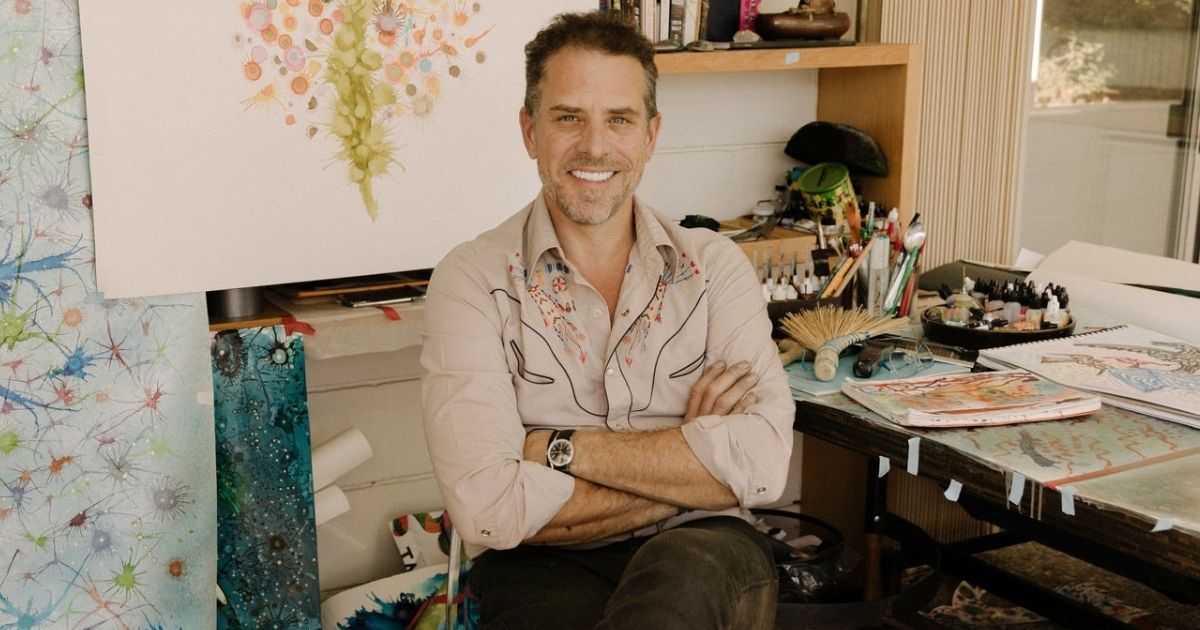 The following article, Pulitzer Prize-Winning Art Critic: Hunter Biden's Art Is So Bad It Shouldn't Even Be Worth $1,000, was first published on Flag And Cross.

Hunter Biden is one of the few public figures who has managed to elude media coverage while simultaneously grabbing headlines for his shady behavior.

Artwork by President Joe Biden’s son is slated to be up for auction this fall through Georges Bergès Gallery for as much as $500,000, according to Newsweek.

The auction immediately prompted ethics concerns once the White House said that potential buyers of the pieces would not be disclosed.

“Of course he has the right to pursue an artistic career just like any child of a president has the right to pursue a career, but all interactions regarding the selling of art and the setting of prices will be handled by a professional gallerist, adhering to the highest industry standards, and any offer out of the normal course would be rejected out of hand,” White House press secretary Jen Psaki said during a media briefing on July 9.

“And the gallerist will not share information about buyers or prospective buyers, including their identities, with Hunter Biden or the administration, which provides quite a level of protection and transparency,” she added.

Ethics concerns aside, his artwork does look like something I would have seen at the Courtyard by Marriott I stayed at last month.

Pulitzer Prize-winning art critic Sebastian Smee of The Washington Post would tend to agree with that sentiment, as he detailed in a Q&A via email that CNN published Saturday.

“… a cafe painter,” he responded. “By which I mean, you see a certain kind of art in coffee shops, and some of it is OK and a lot of it is bad, and sometimes it’s surprisingly good. But you wouldn’t, unless you were related to the artist, spend more than $1,000 on it.

One of hunter Biden’s paintings…

There’s clearly something else going on pic.twitter.com/8rLg9jRk10

Smee doubled down on Biden’s mediocre art earlier in the interview as well, hinting that it lacks depth.

Biden reportedly has been painting for only the past few years and has no formal training.

Painting “keeps me away from people and places where I shouldn’t be,” said Hunter Biden, well known for his foreign dealings and his battles with drug addiction https://t.co/4kWHygfyJd

“To me, Biden seems a bit of a dabbler,” Smee explained. “His work has the feeling of an afterthought. It doesn’t feel like it needed to be made, except perhaps as a therapeutic exercise.

“I have no trouble with that. It’s as good a reason to make art as any. But if I were a museum curator, I would struggle to find compelling reasons to share it with the public.”

“Because we don’t know who is paying for this art and we don’t know for sure that [Hunter Biden] knows, we have no way of monitoring whether people are buying access to the White House,” Walter Shaub, who headed the Office of Government Ethics from 2013 to 2017, told The Washington Post earlier this month.

“What these people are paying for is Hunter Biden’s last name,” Shaub said.

At the very least, one of Hunter Biden’s generic abstract works could make for an interesting conversation starter at a dinner party.

While the upcoming auction is certainly questionable, I’ll try my best not to paint the situation with a broad brush.

Continue reading: Pulitzer Prize-Winning Art Critic: Hunter Biden's Art Is So Bad It Shouldn't Even Be Worth $1,000 ...