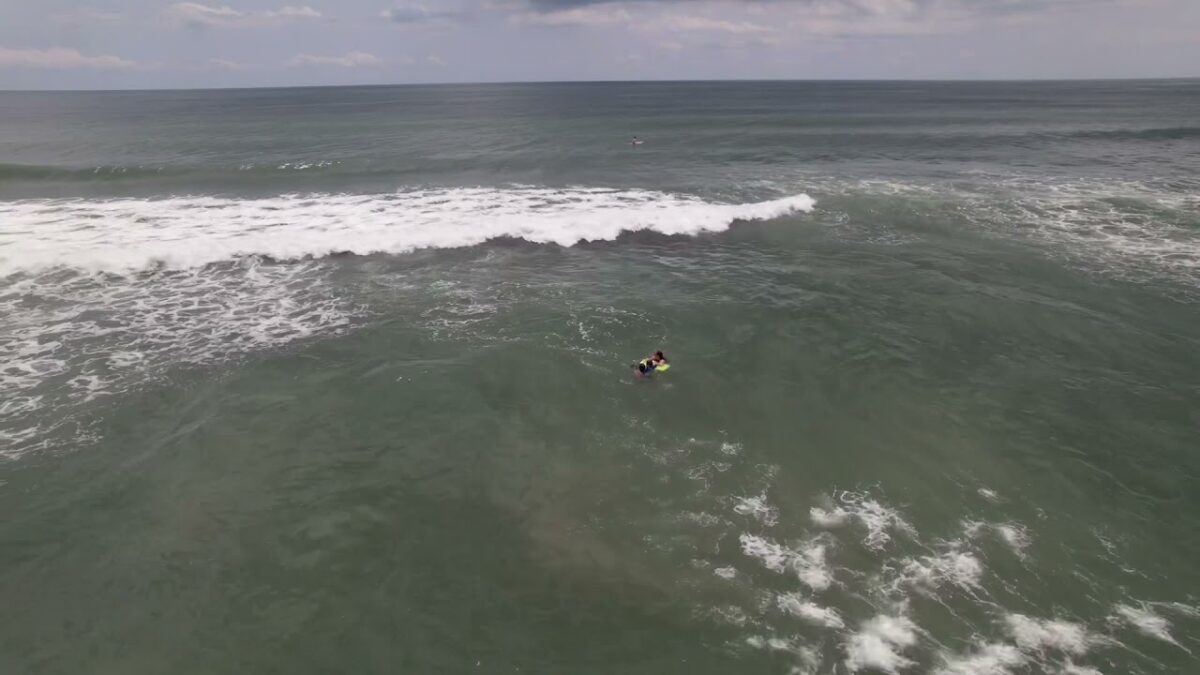 The following article, Drone Captures Incredible Moment Teen Risks Life to Save Mother and Son from Drowning in Deadly Riptide, was first published on Flag And Cross.

When the Shrout family hit Topsail Beach in North Carolina for their last day of vacation on July 3, they had no idea the day would end with one of their members being hailed a hero.

It was Travis Shrout, 18, a sophomore at Hiram College who ended up with that title by the end of the day. Shrout, a former YMCA lifeguard, had already been out in the water for some time bodyboarding when friend Thad Unkefer decided he wanted to try out a new tracking feature on his drone before they left.

That decision would prove to be life-saving.

As Shrout headed out into the waves with his bodyboard, he spotted a mother and her 10-year-old son, and then thought he heard them shout for help.

“I thought I heard ‘help’ but it was such a weird situation,” he told the Akron Beacon Journal. “I said, ‘Are you alright?’ and she said, ‘No.’ I immediately started swimming out to her.”

Though Ashley Batchelor and her son Conner weren’t far out in the water, there was a riptide, and the two were tiring themselves out desperately trying to get back to shore.

“You have no idea how fast it can rip off your feet,” Shrout said of the current. “The ocean’s a scary place.”

Even as Shrout headed toward them, Conner was pulled away from his mother, so as soon as Shrout reached Batchelor, he handed her the bodyboard and went after the boy.

“I’d already been out there already for an hour, maybe two,” he later explained. “I was a little tired, but there was so much adrenaline.”

“I knew I couldn’t swim fast enough with the board. I was already not going as fast as I wanted, and he had already gone under four or five times. He was bobbing up and down, so I got underneath him and had him float. I was propping him up and then the mom got back to us, and we tried our best to get in.”

Try as they might with Shrout’s help and the aid of the bodyboard, the trio still struggled against the current. People on shore had realized what was happening, and another young man responded by picking up his own bodyboard and racing out into the waves.

“It was like something out of a movie!” Shrout’s mother, Gretia Grayson Shrout posted on Facebook. “Everyone was on shore starting to realize what was going on, another young man about 19 or 20, named Andrew Leonard, grabbed his body board and met Travis part way and helped him bring them in.

“It took both of those boys to get through the pull of the ocean and get them in. Andrew jumped in to help without hesitation. The mom grabbed me and just started crying and shaking telling me how God sent Travis to save them and she literally thought they were going to both die.

“Crazy emotional day here. Super proud after being terrified watching it all unfold! So glad God was watching over everyone today! Water was over their heads until you see them touch near shore.”

Because Shrout was originally headed out into the water to assist with the drone, the drone was able to record everything and the video of the rescue has been shared on YouTube.

“I’m glad he got out there, I was trying not to get pulled out myself!” he wrote.

While it may be a while before Batchelor and her son try hitting the waves again, thankfully they have the option, thanks to Shrout and Leonard.

“I was in almost a kind of disbelief,” Shrout added of his actions. “It’s one of those situations you go over in your head what you would do if something like that were to happen. To have it actually play out is pretty crazy. I’m in disbelief that I really did save them because it didn’t feel like I did too much.”