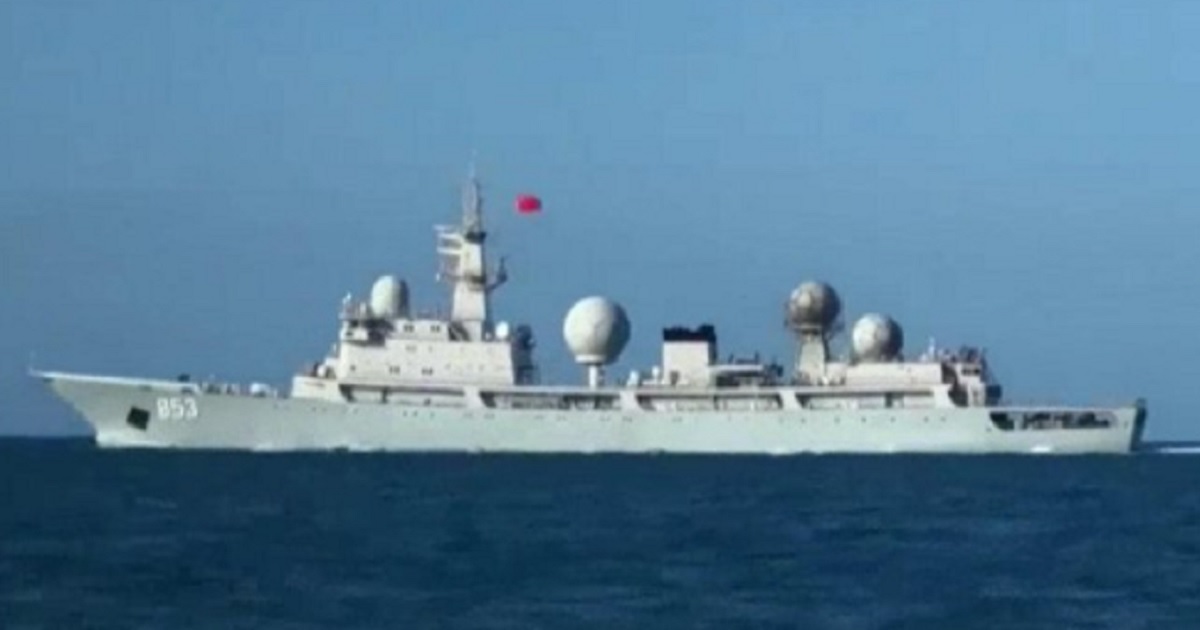 The following article, Single Chinese Ship Appears Near US Wargames, And It Could Soon Hand China a Deadly Advantage, was first published on Flag And Cross.

In yet another reminder that the People’s Republic of China is easily the most powerful and ruthless enemy the United States and its allies currently face on the world stage, a Chinese spy ship spotted off the coast of Australia is now camped out, collecting data as the allies engage in war exercises.

The ship, the Tianwangxing, was expected to make an appearance at the Exercise Talisman Sabre 2021 by the Australian Defense Force, which tracked its movement for weeks ahead of the biannual war games which are now being held off the coast of Queensland.

The People’s Liberation Army Navy vessel is expected to remain just outside Australia’s territorial waters to gather intelligence on the exercises conducted between the militaries of Australia, the US, Japan, Canada, the UK, and New Zealand, which will run until mid-August, according to The Australian (paywall).

A #PLAN reconnaissance ship Type 815 appeared on July 13 about 40 n. miles east of Hualien County moving from north to south.

USS Pickney entered the Pacific via the Bashi Channel on Wednesday.
https://t.co/qK4m0EoyGT pic.twitter.com/2Kl7TnSTWy

Australian Defense Minister Peter Dutton said his government had “fully expected” a spy ship to show up in the region to observe the exercises and that the military had “planned for its presence,” according to the Sydney Morning Herald.

The vessel also showed up to observe the Talisman Sabre games in 2017 and 2019, and the PLA sent spy ships to observe the RIMPAC war games off the coast of Hawaii in 2012 and 2014 that China was, oddly, itself participating in at the time, according to the independent U.S. Naval Institute News. It has since been excluded.

The Type 815 spy ship which is now just outside Australia’s waters, gathering signals intelligence and “signatures” from our and our allies’ military equipment, also shadowed naval exercises between the U.S., India, and Japan to improve how the three allies cooperate in the West Pacific in 2016, according to Popular Mechanics. A second Type 815 was even accused of entering into Japanese waters at one point during those war games and was ordered to leave.

The ship is designed to collect data on missile launches, both by the PLA and foreign forces. It is equipped with massive equipment recovery cranes to fish launched missiles out of the water for analysis.

The ship is also outfitted with between two to four large domes mounted on top of the superstructure, which each protect “a telemetry dish, high-speed camera, or radar dish from saltwater,” Popular Mechanics explained.

They might not look deadly, but the information they gather could give China advantages that make them as dangerous as any weapon afloat.

Rory Medcalf, the head of the Australian National University’s Nat­ional Security College, told The Australian that the ship was gathering intelligence on the capabilities of Australia and its partners, and how they operated together.

“It signifies how seriously China takes the combined capabilities of the US and its allies,” Medcalf explained, according to The Australian. “They want to develop signatures they can match to real world contingencies.”

“They are probably also very interested to see operating pro­cedures, and how effectively we work together,” he noted, adding that this is a reminder that “China’s naval reach can quite easily extend to Australia now, and we can’t hide from the region.”

It’s all very futuristic — and the future of a highly advanced intelligence Cold War is most certainly here now.

Australia‘s Prime Minister Scott Morrison told a local radio station that he is “wary” of the move, although he clarified the ship was “in an area where they are allowed to be, and we know they are there and we are keeping a close eye on it.”

“They’re allowed to be there and the law says they can be there – the Law of the Sea – just like the law says we can be up in the South China Sea,” he said, alluding to long-running tensions between the West and Beijing over the region.

Ironically, by sending the spy ship just outside Australian waters, China is doing exactly what it usually loudly objects to when it feels a foreign vessel encroaching on waters it claims as its own, and the South China Sea has been rife with such tensions as of late between Beijing and the U.S. and its allied forces such as Australia and Japan.

“And so we would just simply say that we think the same tolerances and the same appreciation of those international laws should apply,” Morrison added.

Dutton echoed these words as well, saying that, “Australia respects the right of all states to exercise freedom of navigation and overflight in international waters and airspace, just as we expect others to respect our right to do the same.”

“We need to push back against the threats to our country, whether it is now or over the course of the next decade or two,” he also said. “We need to be realistic about what is happening within our own region and … our alliances will continue to deepen because our partners recognise that threat as well.”

There is absolutely no denying that the Chinese military, despite its formidable number of troops, has resources that pale in comparison to that of the United States and by proxy, anyone the United States is obligated to defend.

China’s rulers are playing dirty, and they don’t care who knows it. But do not mistake their relative weakness to our armed forces to mean that they pose a diminished threat to our nation and the free world at large — far from it.

As they weave a web of influence, intelligence, and intellectual theft through the West, their Belt and Road Initiative gives the PRC a means of establishing their military in new, strategic ports and harbors in the impoverished and unstable nations they entrap with infrastructure investments and impossible-to-repay loans.

The People’s Republic of China is ruthless, wicked, and determined to destroy anything that stands in the way of its quest for global dominance, by any means necessary, to whatever extent the global community allows.

Continue reading: Single Chinese Ship Appears Near US Wargames, And It Could Soon Hand China a Deadly Advantage ...

No story here, this type of spying between navies has been going on for decades. Foreign navies spies on our warship and we spy on theirs. It is the cost of doing business as a country.