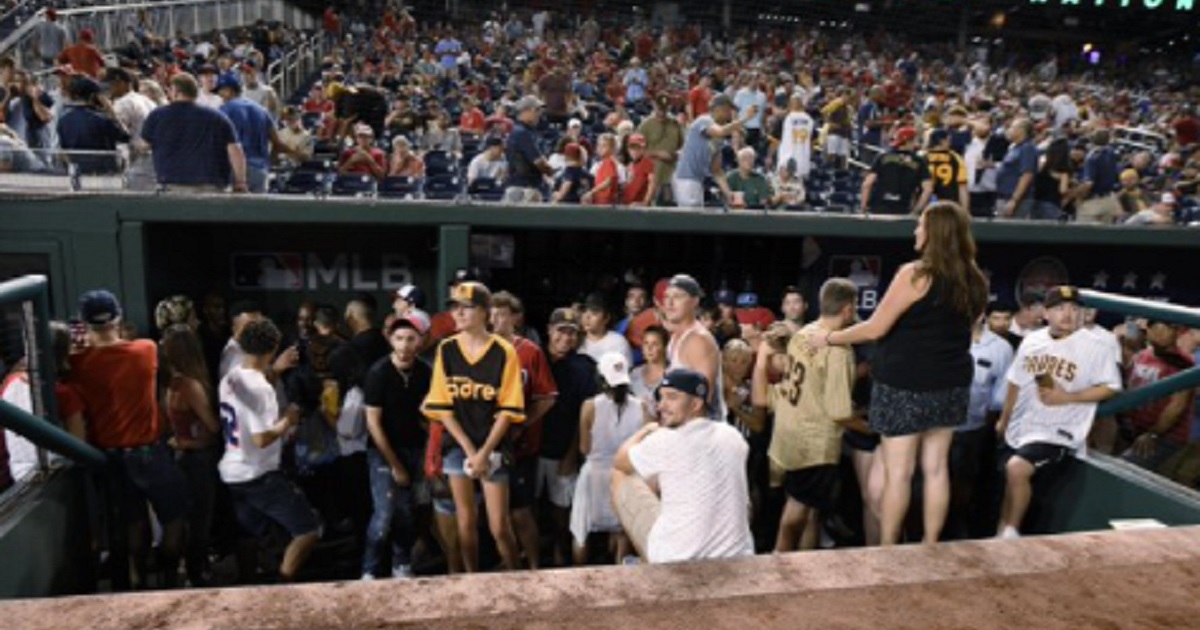 The following article, Fans Take Cover in Dugouts as Gunfire Erupts Mid-Game at DC Stadium, was first published on Flag And Cross.

Gunfire outside of Nationals Park in Washington, D.C., on  Saturday caused a mass exodus of fans from the stands who feared the shots were coming from inside the stadium.

As a result, the game between the San Diego Padres and Washington Nationals was suspended in the sixth inning, according to The Associated Press.

“It was just a chaotic scene,” umpire crew chief Mark Carlson told the wire service. “We heard what sounded like rapid gunfire. We didn’t know where it was coming from.”

According to police, gunshots were exchanged between the occupants of two separate cars, the AP reported.

Two people who had been one of the cars were being questioned after they showed up wounded at a local hospital for treatment.

A bystander who had been attending the game was among those wounded. She was outside the stadium at the time, according to the AP.

The shooting occurred about 9:30 p.m., according to The Washington Post.

“The Nationals initially announced there had been an incident outside the stadium and posted a message on the scoreboard telling fans to remain inside the stadium,” the AP reported.

“About 10 minutes later, the team tweeted: ‘A shooting has been reported outside of the Third Base Gate at Nationals Park. Fans are encouraged to exit the ballpark via the CF and RF gates at this time.'”

The park was cleared by about 10:15, according to the Post.

Fans inside the stadium described an “unreal” scene.

Arman Ramnath, 27, of Arlington, Virginia, told the AP he and a friend were sitting along the third-base side when they heard popping.

“We weren’t sure what it was. Then everyone started ducking,” Ramnath said, adding that he and his friend ducked behind seats at first.

“It felt very surreal. I wasn’t really sure how to react,” Ramnath said. “I mean, you hear about it … but you never expect it to be something that could affect you.”

Alaina Rodriguez of Chambersburg, Pa., said fans “started hitting the deck” after the shots were heard.

“I grabbed a child in front of me because the lady in front of me didn’t really know what was happening,” Rodriguez said, according to The Washington Post.

“… We were down for a while, and then we saw action going on in center field, and it just kept going around the stadium. Then we see [Padres shortstop Fernando Tatis Jr.], and he’s out here, and he tells everybody, ‘Go, just go.’ I don’t know if they have family or what was going on out here, but they told everybody to go,” she said.

Many fans sitting near the third-base side crowded into the Padres dugout for safety, while others sitting on the first-base side cowered in the Nationals dugout.

BREAKING: The San Diego-Washington baseball game has been halted after Nationals said a shooting was reported outside the stadium. https://t.co/igaBNyvxEb

On man told the AP that he at first thought the sounds came from a practice session for a fireworks show. He realized the incident was serious, he said, when he saw Tatis “bolt from the field.”

In the stadium’s Diamond Club, he said, fans hid under tables and chairs.

“People were down on the ground, kind of petrified, trying to calm down the younger kids,” he said. “I was taken aback, I was scared.”

I’ve never seen what is happening at Nationals Park pic.twitter.com/PcRtZpA89i

The shooting came one day after a Friday night incident in which a 6-year-old girl was killed and five other people were wounded.

Dan Friedell, a reporter for WTOP-TV, said that he had “never seen anything like this.”

At first, some thought the noise was thunder, he said.

“Next thing we know, we can see hundreds, perhaps thousands of fans, leaving their seats behind the center-field bullpen and the San Diego Padres bullpen — running toward the center-field exit … it’s just completely unclear. It was very chaotic,” Friedell said, according to WTOP-TV.

“We saw people in the second deck, ducking below the concrete in the front of their section,” Friedell said.

The game, which was stopped in the bottom of the sixth inning, will resume Sunday.