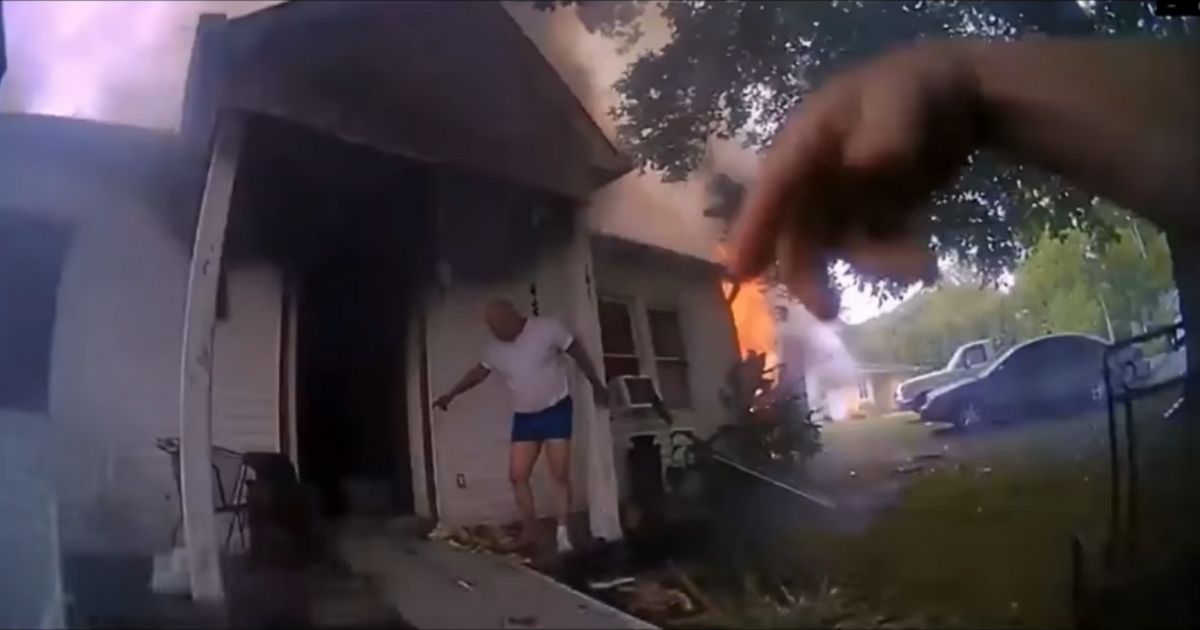 The following article, As House Fire Explodes Around Him, Heroic Police Officer Rushes in to Save Woman Trapped Inside, was first published on Flag And Cross.

Cpl. Allan Ervin has spent much of his life in service to his country and fellow man.

An Army veteran and 12-year member of the Columbia Police Department in Tennessee, this wasn’t the first time he’d helped a citizen — but July 9 proved to be the day of one of his most daring rescues yet.

According to WKRN-TV, Ervin was the first to respond to a call for help regarding a house fire that took place that Friday morning. Body camera footage showed him pulling up to the house, stepping out of his vehicle and immediately being met with an explosion. The house was engulfed in flames, and 37-year-old April Chumley was trapped inside.

Three people were outside the house when Ervin arrived. Chumley’s mother, Lisa Melheim, and Joe Hartsfield, her father, managed to get out on their own power, but Chumley is severely handicapped and was still in the house, unable to save herself.

The fire was worsened by oxygen tanks, which were catching fire and exploding. Showing great determination, Ervin charged into the inferno and managed to find Chumley, who was very badly burned, lying on the floor by the front door — but alive.

The fire department was soon on the scene and able to put out the blaze. The fire has been ruled accidental, though the cause has not yet been revealed.

Ervin’s body camera footage has been released in part, showing just how extreme the situation was and how much danger he faced during the daring rescue.

WARNING: The following video contains graphic content that will be disturbing to some viewers.

“At 8:21 am Friday July 9, Columbia Police Officers were dispatched to a residential structure fire,” the Columbia Police Department, Tennessee, shared on Facebook along with the video.

“Upon arrival, Corporal Allan Ervin found a disabled woman still inside the home. Crpl. Ervin responded by entering the home, retrieving the individual and carrying her to safety. The cause of the fire is still under investigation.

“The following video is from Crpl. Ervin’s body-worn camera. Due to the condition of the rescued woman and its graphic nature we did stop the video before she could be viewed,” the department wrote.

“Crpl. Ervin suffered no injuries during the incident and the rescued woman remains in critical care at Vanderbilt Hospital for burns and smoke inhalation.”

Columbia Deputy Fire Chief Nick Brown told WKRN that though the officer didn’t have the gear or training that firefighters have, his actions likely saved Chumley’s life.

Ervin emphasized the fact that preservation of life was his goal and that he knew the risk he was taking by entering the building.

“Timing was very much on my side that day,” Ervin told The Daily Herald, according to Police1. “We know the risks going in.”

“In that moment, it is all about controlled chaos. That day the goal was to get everybody out, and we did it. I would depend on all the officers to do the same. This is a great police department here in Columbia.”

Continue reading: As House Fire Explodes Around Him, Heroic Police Officer Rushes in to Save Woman Trapped Inside ...