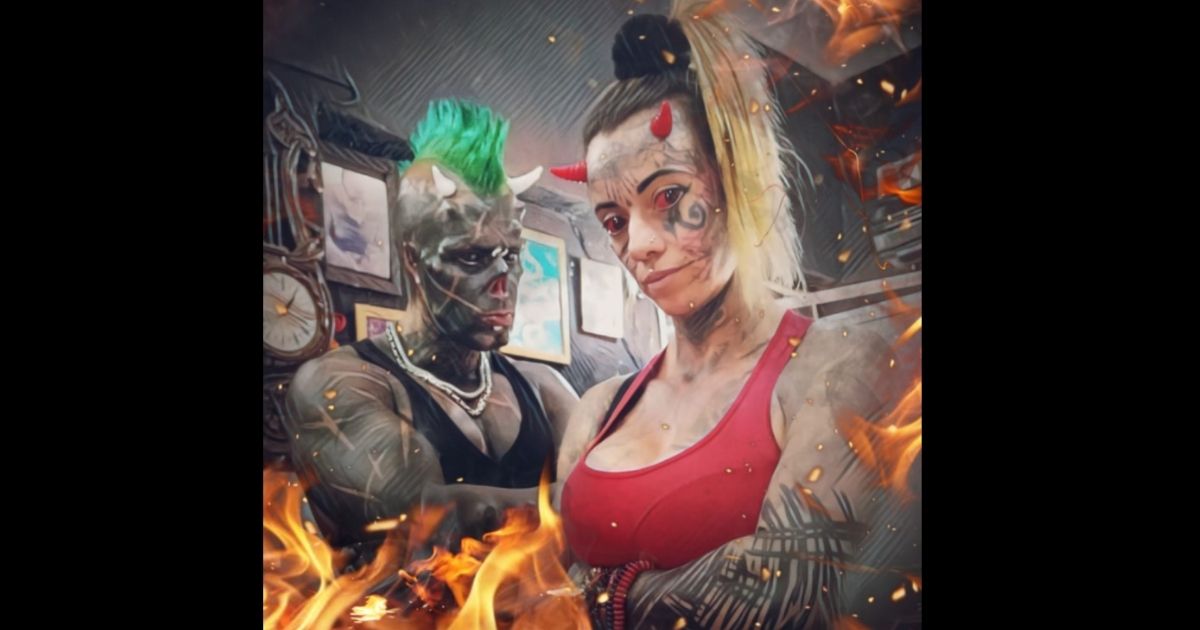 The following article, 'Human Satan' Goes Too Far with Belly Button Removal, 15-Inch Wound That Refuses to Heal Only Getting Worse, was first published on Flag And Cross.

Once upon a time in the not-too-distant past, mutilating your body was considered unsavory. The idea of people opening up giant holes in their ears or other areas of their bodies seemed outlandish.

Fast-forward to today, when we are told that in order to be sufficiently accepting, we must not judge anyone for any decision they make about their body.

Naturally, telling people that there are no limits on what is acceptable will lead to certain individuals taking things too far. That is exactly what has happened to Michel Faro Prado of Praia Grande, Brazil.

According to Zenger News, Prado has been deemed the “Human Satan” due to his many body modifications and mutilations. They have included implanting horns in his forehead, receiving many tattoos and removing parts of his ears, fingers and nose.

For his latest operation, Prado had liposuction in March which included the removal of his belly button. However, this particular modification has caused lasting negative effects.

“[Prado] told Zenger that he recovered well but noticed later that the doctor had left a small amount of excess skin behind,” the outlet reported. “He had corrective surgery on June 28. And then his body refused to heal.”

Prado’s wife, Carol, said he now has an open wound spanning 15 inches that he has been unable to close.

“The days went by and his stitches began opening,” she said. “We’re not managing to make it close on its own.”

Carol Prado has also made plenty of her own bodily modifications, earning her the nickname “Demoness.” She has attempted to raise money for her husband to fund future procedures aimed at healing his wound.

Zenger reported Michel’s latest surgery was on July 8 in an attempt to stop potential infection in the wound. He now needs another procedure at “a private hospital on an undisclosed date.”

In May 2020, Compare Camp reported body modifications, particularly tattoos, no longer suffer from a “bad reputation.” As evidence, the resource wrote that 36 percent of Americans aged 18-29 have at least one tattoo.

“We no longer live in a world where tattoos are only seen on mob bosses, zealous religious practitioners, and hardened criminals,” Compare Camp reported. “Today’s society has slowly accepted tattoos as a work of art.”

On the surface, this does not seem to be a problem. While some people may be against getting tattoos of their own, it should not greatly matter to them if other people choose to receive them.

Like many aspects of a world captivated by post-modernism, the problem arises when people take this idea to the extreme. Instead of just getting a couple of tattoos, Prado feels the need to remove body parts and implant objects in himself.

Many people, primarily those on the left, then push the post-modern idea that there is no objective “right” or “wrong.” We are supposedly not allowed to tell people that removing their belly button or their nose is a bad idea, because that would make us closed-minded.

So when a person like Prado ends up with a wound that will not heal, who is to blame? Certainly, he bears some of the blame for his bad decision, but shouldn’t we also understand how a philosophy accepted by so many might lead to this result?

By far the most heartbreaking portion of Zenger’s report came when it explained Prado “acknowledges that he believes in God.” As Christians, it is our duty to love our neighbor, but also to tell them the truth.

The Bible very clearly speaks against mutilating our bodies, but Prado continues to engage in sin despite identifying his belief in the Lord. It is not loving for people to accept that sin without pointing out to him that it is wrong.

We do not know Prado’s full story, and it is certainly possible that people in his life have pointed out this sin to him. However, it seems clear that at the very least, his wife is enabling and even encouraging this sin, and many other people subscribe to this same post-modern philosophy.

The “Human Satan” has clearly made some poor decisions during his life, as has every human who has ever lived. It is now our responsibility to identify this sin not out of judgment, but rather out of love.

Continue reading: 'Human Satan' Goes Too Far with Belly Button Removal, 15-Inch Wound That Refuses to Heal Only Getting Worse ...