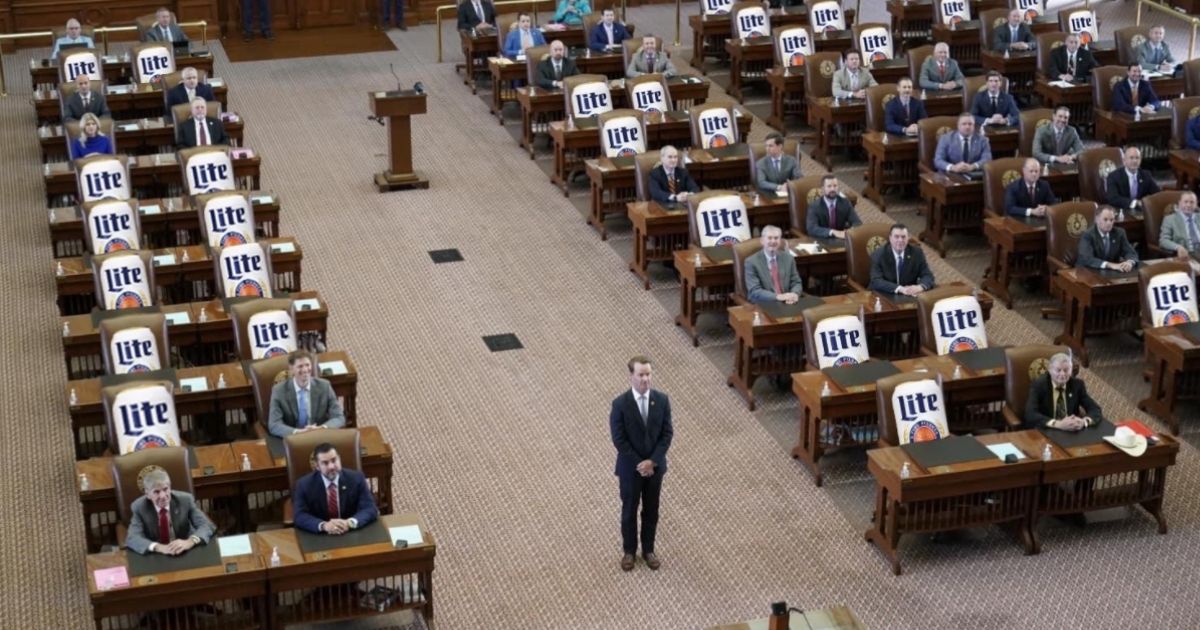 As Texas Republicans wait for their Democratic counterparts to come back to the state like adults and face the inevitable, they’re having way too much fun mocking their self-aggrandizing colleagues for fleeing on a private jet so quickly that they forgot to even don masks whilst in flight.

A lot of the mockery, really, has to do with the fact that while the Texas Democrats who jetted off to Washington, D.C., rather than watch the Republican legislative majority pass an election integrity bill they’ve deemed literally Jim Crow (or something), they did, in fact, remember to grab a case of Miller Lite for the trip.

Now that the left-wing lawmakers are bravely enduring a harrowing stay at the capital’s Washington Plaza Hotel that’s being bankrolled by country singer Willie Nelson and former Democratic Rep. Beto O’Rourke, the Texas GOP is issuing blows from afar by way of some top-notch Twitter trollery.

The lawmakers left Texas on Monday to deprive the state’s Republicans of the quora they need to pass a voter integrity bill, the passage of which would have otherwise been inevitable. Democrats attempted a similar stunt in 2003 to prevent a redistricting bill, which successfully put the vote on the bill off by a few weeks.

But oh, there was no Twitter in 2003, so I doubt the state GOP had the same means with which to scorch their colleagues from afar at the time.

Well, if this decade is going to be such a horrendous political dumpster fire, at least Twitter makes it significantly more hilarious.

On Monday, the lawmakers had no sooner left the state than they were called out for their silliness by Texas Lt. Gov. Dan Patrick, who noticed that the Democratic lawmakers brought a case of Miller Lite beers on their private jet as they heroically whizzed off to commence a mass media spectacle.

Smiling House Dems fly off to DC on a private jet with a case of Miller Lite, breaking House quorum, abandoning their constituents, while the Senate still works. It’s my hope that Senate Dems report tomorrow to do what they were elected to do. We will vote on #SB1. #txlege pic.twitter.com/5Kcc4emNFg

State Rep. Cody Harris turned this into a hilarious meme, tweeting out a photo of a session of the state legislature where all the missing Democrats were replaced with cans of Miller Lite.

“Wish you were here,” he wrote.

Wish You Were Here #txlege pic.twitter.com/h7KfP5HGVR

It wasn’t the only shot fired from Harris, either.

Truth be told, these people are just asking to be memed and mocked.

When the lawmakers first touched down on the tarmac in Washington, D.C., these super serious activist lawmakers immediately took to social media to tell all their followers how totally brave and heroic they were.

Which, of course, pretty much made them instant fodder for further trolling, especially as they’d already been busted out by the lieutenant governor for the Miller Lite.

Clearly not yet aware of how much they were owning themselves with all their humble bragging, they just kept throwing out the fodder for Twitter mockery.

Meanwhile, however, Republican Texas Gov. Greg Abbot was himself in no mood for jokes. He told Fox News’ Laura Ingraham on Monday evening that once the partying, maskless Democrats returned to the state, well, they’ll get arrested.

“Once they step back into the state they will be arrested and brought back to the Capitol and we will be conducting business,” he firmly stated.

Well, you know what they say: Don’t mess with Texas.

And this absurd political stunt is most certainly messing with the will of the good people of Texas, who elected a Republican majority to the state and have a right to see these lawmakers enact it in the form of much-needed election reform.