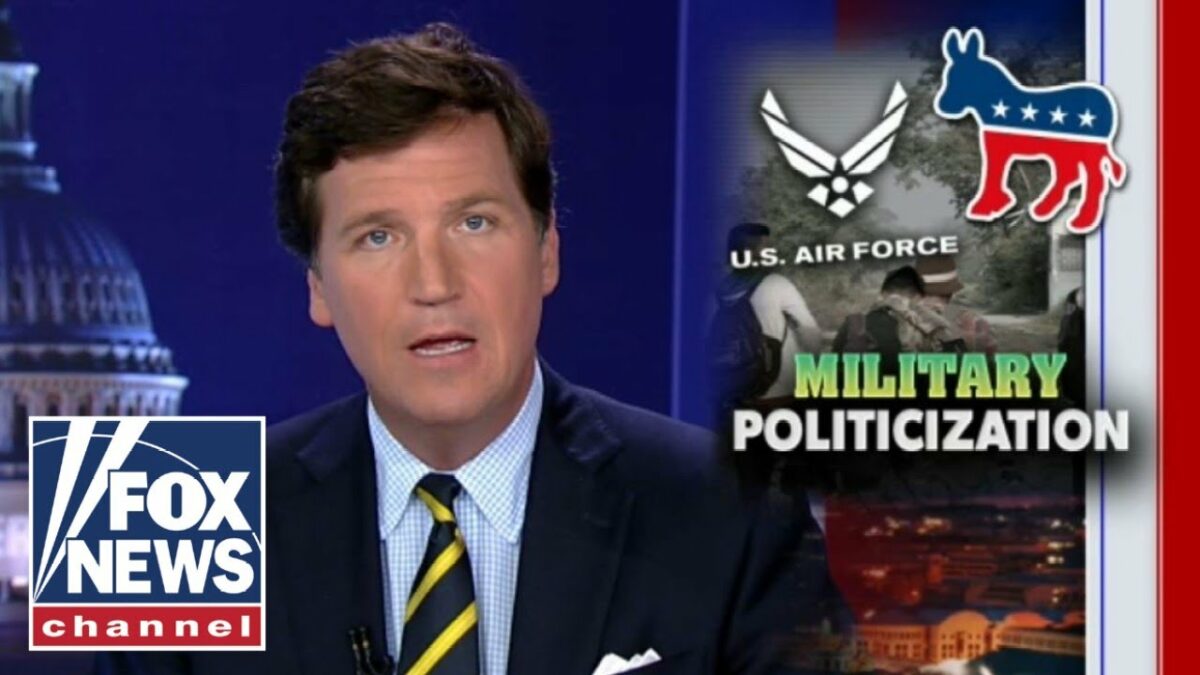 The Biden administration is using the U.S. military to secretly transport scores of illegal aliens across the nation and scatter them in various cities and towns — maybe in your neighborhood. And you’re paying for it, whether you like it or not.

In the bombshell emails, Burrows informed his subordinates that they will transport illegal aliens around the country and that they are banned from taking photos or revealing that this is happening.

“This show has confirmed that the Biden administration has enlisted the U.S. military to move illegal immigrants secretly around our country,” Carlson said on Wednesday.

“That is happening at Laughlin Air Force Base in Texas. We know this is happening there because a man called Lt. Col. Matthew Burrows sent his subordinates an email spelling it out very clearly.”

The note read: “Over the next few days, weeks or months you may see passenger aircraft on our ramp transporting undocumented non-citizens. Please review the attached public affairs guidance on the issue.”

Carlson underscored that Burrows’ email had “instructed uniformed military personnel to hide what was happening on the base from the country they’re sworn to serve. ‘Do not take photographs and refrain from posting anything on social media.'”

The Biden administration’s top-secret mission of flying illegal aliens from border states to the interior of the United States — using taxpayer-funded resources — is a stark contrast to the Pentagon’s position during the previous administration.

When former President Donald Trump was in office, the Pentagon sternly refused to protect the southern border, claiming that doing so would politicize the military.

“And yet, according to this document, here was the very same U.S. military leadership at the Pentagon helping the Biden administration — with maximum, enforced stealth, with secrecy — to subvert this country’s core immigration laws,” Carlson said.

He said the Department of Defense had confirmed this astonishing abuse of taxpayer-funded military resources.

“The Pentagon has confirmed it to us,” Carlson said. “Spokesman Chris Mitchell described the flights from Laughlin as a ‘noncitizen movement,’ part of what he called ‘the U.S. Immigration and Customs Enforcement’s mission.’

“He told us then to direct any further questions to ICE. So we did. We called ICE, multiple times. ICE did not deny they were using Laughlin Air Force Base to relocate large numbers of foreign nationals into the interior of our country and do it secretly. The question is: Where are these people going?”

It is tyrannical government abuse to move armies of unvetted illegal aliens into neighborhoods across the country without informing the public of this large-scale resettlement program.

Coming to a city near you !https://t.co/1wcm8PBhKb

“Apparently, Americans do not have a right to know where foreign nationals are being resettled in their own country,” Carlson said.

“We do know, thanks to the Center for Immigration Studies, that the administration, the Biden administration, has been sending illegal migrants all over the country for some time now.”

Resettling caravans of unvetted illegal aliens across the U.S. is not only a national security threat but also a danger to public safety amid the pandemic that the left constantly fearmongers over.

Why are President Joe Biden and the Democratic Party — which weaponized the pandemic to impose draconian restrictions on the public — not concerned that unvaccinated illegal migrants could spread the coronavirus to American citizens?

Since Biden was installed as president in January, scores of commercial and charter buses have been transporting tens of thousands of illegal aliens in the dead of night from Texas, Arizona and California and dumping them off in Florida, New Jersey, Tennessee, Massachusetts, Missouri, North Carolina, Georgia, Kentucky and large cities in Texas such as Dallas and Houston, Carlson noted.

“Changing the electoral map, are we?” he said. “Serving the businesses that paid for you to get elected, are we? Yes, we are.

“Now those were buses that you saw. Now, the administration is using aircraft and Air Force bases. And that ought to give you some sense of the scale involved here.

“What you’re watching is demographic transformation in our country without our consent and in violation of our laws. That is happening.”

Further evidence of the systematic resettlement of migrants in our communities that is occurring because Biden won’t secure the border or enforce immigration laws, making illegal entry easy & removal of illegals nonexistent. It’s time for Biden to be transparent w/Tennesseans. https://t.co/RG7HXaCSXg

Carlson said it’s not an exaggeration to say “Biden has opened this country’s borders to the world. Since Biden’s inauguration in January, the Border Patrol has apprehended close to a million foreign nationals coming into this country over land through Mexico.”

And that’s just in the past six months. The Biden administration has now imported enough people to demographically change the country forever.

“The current mass movement of foreign nationals into the United States was never approved by Congress,” Carlson noted. “No one passed a law asking for it. The Biden administration just did it, unilaterally, without asking Americans what they thought of it.”

Biden’s DHS Considers a Plan to Bring Illegal Aliens Deported by Trump Back to the US https://t.co/MIMfG8IdNB

What Biden is doing violates longstanding immigration laws that he helped pass during his 50-year political career.

And it violates the foundation of our democracy, which is that citizens control who runs the government.

“We, as citizens, have an absolute right to know what they are doing,” Carlson said.

Scandalous! And how about that other report of the dem’s china-virus now in a upswing? Think all those illegals being inserted among Americans may be a cause????