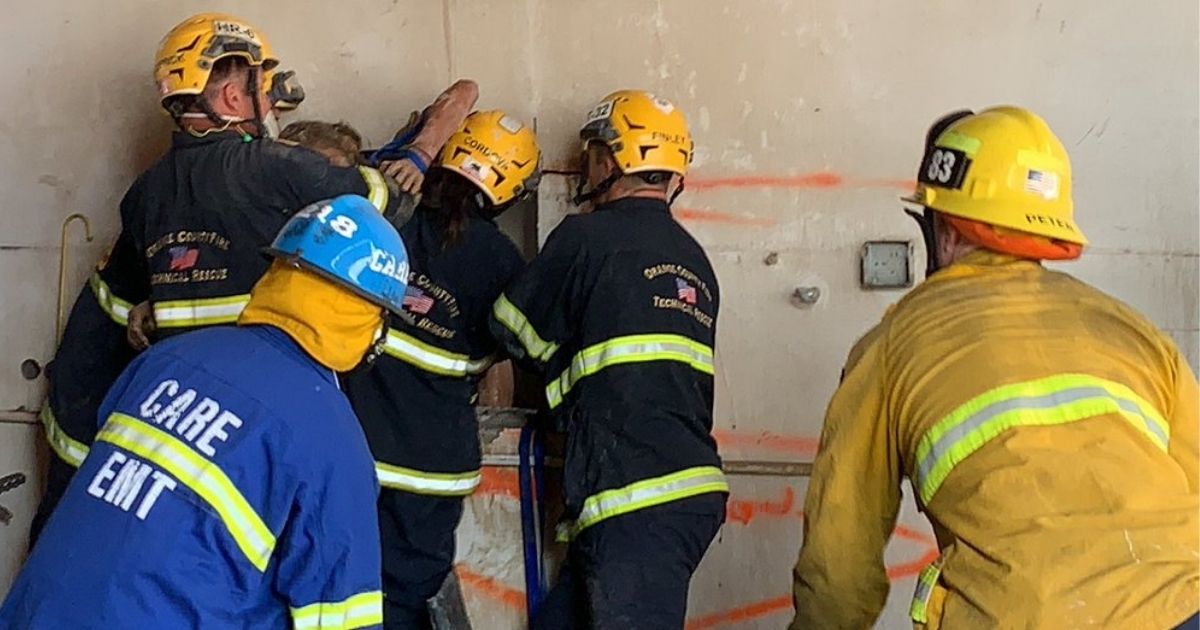 On Tuesday afternoon, a handful of firefighters in Orange County, California, were treated to a unique scenario when a woman became trapped in a very small space between two buildings.

One of the buildings was an auto body shop. Workers heard some strange shouting going on, but chalked it up to one of the locals.

The shouting continued, though, and at around 2:00 p.m., they decided to call the police.

When officers arrived, they canvassed the area, eventually making it to the roof and peering down the 10-inch-wide space to see a naked woman wedged sideways at the bottom, according to The Sacramento Bee.

“It’s big enough for a cat, or maybe a dog, but definitely not a human,” owner of Tim’s Auto Repair and Smog shop, Max Benett, told The Orange County Register.

The woman was conscious and was able to communicate with authorities, but she declined to state how she got into the compromising position.

Once the source of the cries had been identified, firefighters had to figure out how to extract her.

“The biggest challenge was cutting close enough to actually get her out without pulling her through this tight little space but then also not let any part of that wall come down on her and injure her,” Capt. Thanh Nguyen with the Orange County Fire Authority told KNBC-TV.

“She was just right inside here. She was scrunched in there sideways.”

Rescuers had to drill through eight inches of concrete to access the woman.

After two and a half hours, the woman was finally out of her predicament and was soon on her way to the hospital. She didn’t appear to have sustained any major injuries.

“Your Orange County firefighters expertly cut through 8″ of concrete to get access to a woman wedged between two concrete walls 8″ apart in the City of Santa Ana this afternoon,” they shared on Facebook.

“The woman was extricated 2.5 hours later and treated by firefighter paramedics. The patient was transported to the hospital. It is unknown how she got there.”

After a cautious and technical operation, firefighters have gotten the victim out. Our paramedics will be assessing her now.

We appreciate everyone has questions. We will release details when they become available. pic.twitter.com/TgU1fO9jiZ

It’s still not known — or at least, has not been shared — how the woman got stuck between the buildings in the first place, but it’s a mercy she was found when she was.