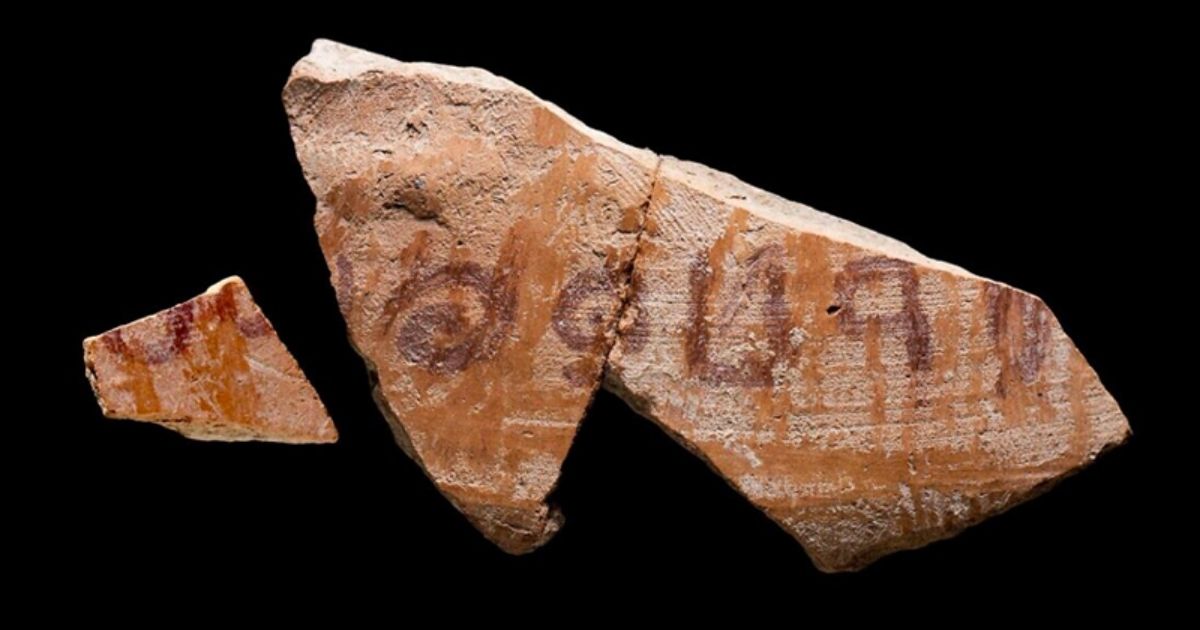 The following article, Israeli Archaeologists Discover 3,000-Year-Old Inscription That Confirms Part of the Bible, was first published on Flag And Cross.

A piece of roughly 3,100-year-old writing containing the name of a figure mentioned as one of the judges in the Old Testament has been discovered.

Five letters that appear to represent the name Jerubbaal were found on a piece of pottery discovered in Southern Israel among other finds dating somewhere between the 11th and 12th centuries B.C., according to an article published in the Jerusalem Journal of Archaeology.

Researchers said the pot was unearthed in 2019 at Khirbet er-Ra‘i, near Kiryat Gat in the Southern District of Israel.

Archaeologists in southern Israel have found a 3,100-year-old fragment of a jug with five letters written in ink that appear to represent the name Jerubbaal, or Yeruba’al. https://t.co/csLP4oMhuc

“It would be tempting to posit that this inscription is that of the biblical figure,” the journal article said. “After all, the chronological framework for this figure is the period of the Judges, and so a time frame for him in the twelfth or eleventh century BCE (the date of the inscription) is entirely plausible.”

However, the announcement of the find noted although the pottery bears the name of a Biblical figure, archeologists cannot go any further.

“[T]he name of the Judge Gideon ben Yoash was Jerubbaal, but we cannot tell whether he owned the vessel on which the inscription is written in ink,” archaeologists said, according to The Times of Israel.

“The name Jerubbaal is familiar from biblical tradition in the Book of Judges as an alternative name for the judge Gideon ben Yoash,” Professor Yossef Garfinkel and archeologist Sa‘ar Ganor from the Hebrew University of Jerusalem, who co-directed the excavations, said in a joint statement.

The statement noted “Inscriptions from the period of the Judges are extremely rare and almost unparalleled in Israeli archaeology. Only a handful of inscriptions found in the past bear a number of unrelated letters.

“This is the first time that the name Jerubbaal has ever been found outside the Bible in an archaeological context — in a stratum dated to around 1,100 BCE, the period of the Judges.”

The archeologists noted Gideon was a significant Biblical figure.

“Gideon is first mentioned as combating idolatry by breaking the altar to Baal and cutting down the Asherah pole,” they said.

“In Biblical tradition, he is then remembered as triumphing over the Midianites, who used to cross over the Jordan to plunder agricultural crops. According to the Bible, Gideon organized a small army of 300 soldiers and attacked the Midianites by night near Ma‘ayan Harod.”

Garfinkel said the settlement they uncovered appeared to have reached its apex at the time of the Judges.

The experts said the find was significant regardless of the identity of the individual to whom the inscription referred.

“In view of the geographical distance between the Shephelah and the Jezreel Valley, this inscription may refer to another Jerubbaal and not the Gideon of biblical tradition, although the possibility cannot be ruled out that the jug belonged to the judge Gideon,” Garfinkel and Ganor said. “In any event, the name Jerubbaal was evidently in common usage at the time of the biblical judges.”

“As we know, there is considerable debate as to whether biblical tradition reflects reality and whether it is faithful to historical memories from the days of the Judges and the days of David,” they said.

“The name Ishbaal, which is only mentioned in the Bible during the monarchy of King David, has been found in strata dated to that period.”

“The fact that identical names are mentioned in the Bible and also found in inscriptions recovered from archaeological excavations shows that memories were preserved and passed down through the generations,” Garfinkel and Ganor said.