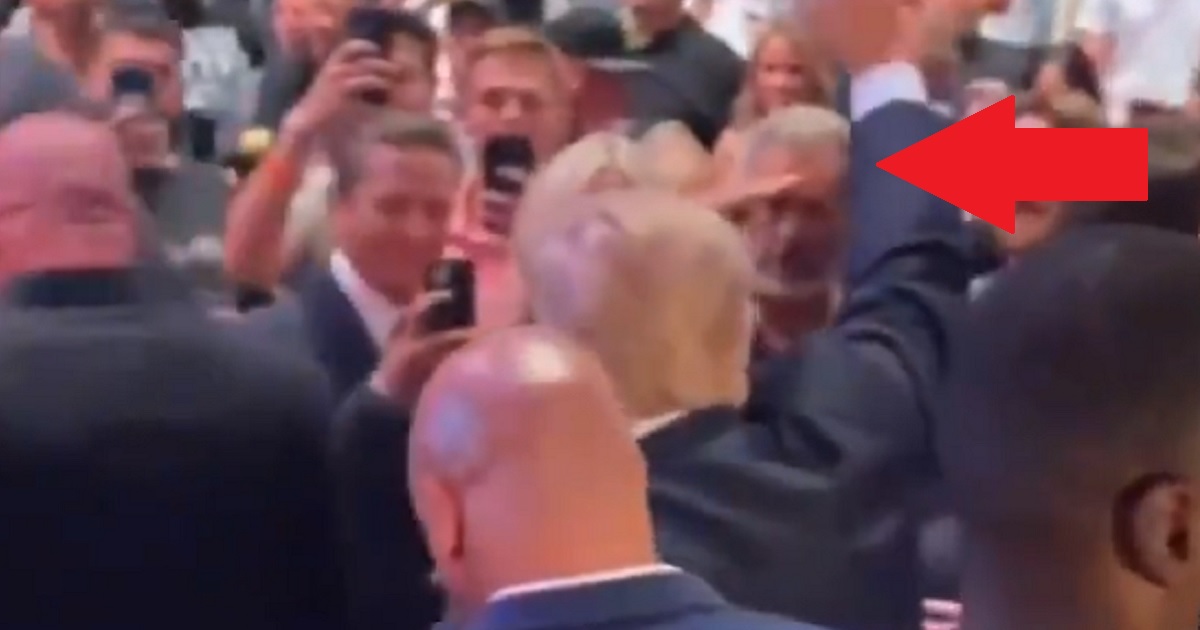 The following article, Trump Haters Freak Out Over Salute Mel Gibson Managed to Sneak Into Footage of Trump, was first published on Flag And Cross.

Hollywood megastar Mel Gibson showed former President Donald Trump a display of respect at the star-packed UFC 264 bout between Conor McGregor and Dustin Poirer this weekend in Las Vegas, and the leftists lost their minds over it.

Trump had entered the T-Mobile Arena to a reception that left no doubt about how MMA fans feel about the country’s 45th president.

After the fight, the outpouring of love continued. Gibson, 65, managed to snap off a salute to Trump that was captured in footage of the former president and his security detail making their way out.

Gibson showed the former commander in chief the utmost respect. Naturally, the leftists’ heads began exploding after the clip of Gibson was authenticated by numerous fact-checkers — including left-wing Snopes.

No one is surprised that racist trashy antisemitic drunkard Mel Gibson likes Agolf Twitler or that his infatuation w/ the orange rapist insurrectionist is so over the top that he was saluting the evil criminal. White supremacists are always fond of their Klan leaders.

Mel Gibson is who we thought he was.

Of course Mel Gibson gave Trump a salute at the UFC game, they both have shared fondness for Nazis and white supremacists.

There is no such thing as cancel culture if Mel Gibson isn’t cancelled by now.

Can you imagine that kind of hate for any other man? Trump is loathed by the left now more than ever, and it’s because these people fear him.

The man is everything the current president isn’t and his presence all over the internet is a thorn in the side for those who’d hoped two impeachments, the Russia hoax, the Charlottesville hoax and other political lynchings would forever end him.

Trump went to a late-night fight in the desert and stayed awake for the entire event. The former president, unlike President Joe Biden, stayed up past the evening news and proved that people still love him — including one of the most renowned movie makers on the planet.

Why do the left-wing Twitter trolls hate Trump, and Gibson, so much? Because both men represent a resistance to the Marxist ideologies currently taking over our country.

Trump still represents a movement that wants to make America great, energy independent, proud of its history, safe, and sovereign.

Gibson, a man who has taken the left’s hits for almost two decades, publicly stood up and saluted the man who couldn’t be destroyed by years of political witch hunts and failed knockout punches by the establishment media.

Look at the hateful comment left on a completely non-political video Gibson posted while at the fight:

Guess that’s what happens when you’re filled with hate and self-loathing, your acting career is decades behind you, and no one remembers who you are.

These people want blood. Trump and those who show him public signs of respect for him are an unfortunate reminder to these cretins that patriotic Americans will never fold and give in. Of course these people are fuming.

Those wishing to end Mel Gibson, though, are wasting their breath and energy. How do you cancel an actor loved by half the country who is worth more than $400 million?