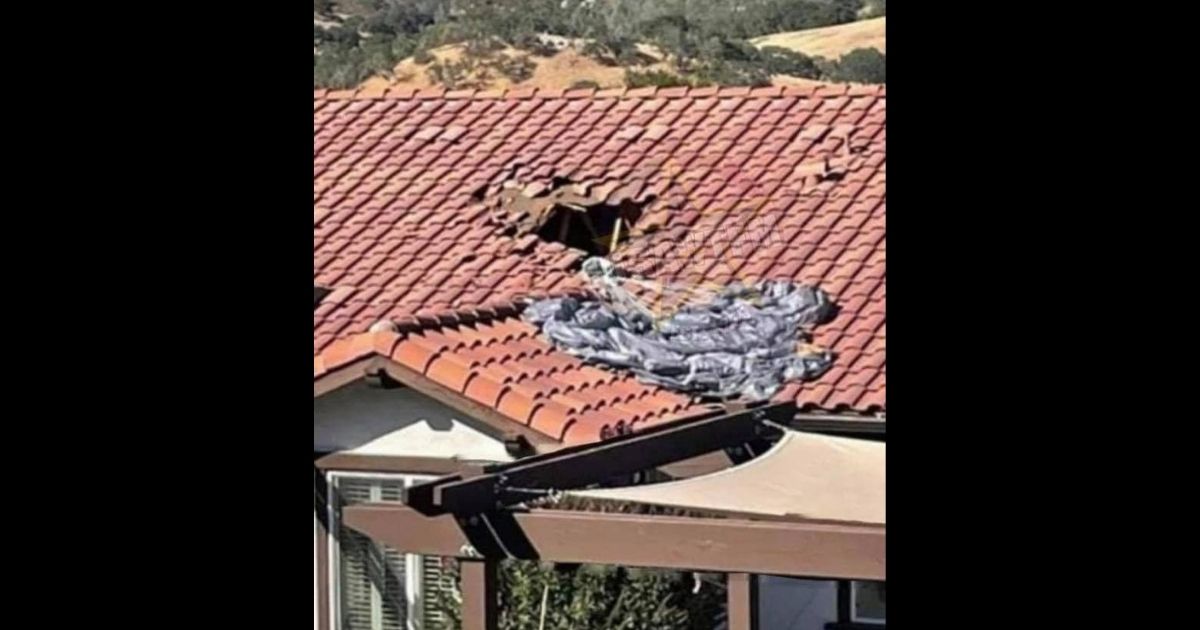 The following article, Soldier Smashes Through Roof of Home When Parachute Fails to Deploy After Jumping Out of Plane, was first published on Flag And Cross.

Just two days after many Americans celebrated their independence, a British soldier came crashing through the roof of a house in Atascadero, California, around 5 p.m.

No one had suspected the British were coming to that neighborhood — perhaps least of all the British themselves — but all things considered, the outcome was much more positive than it could have been.

The paratrooper had been training with U.S. troops, performing high altitude, low opening jumps. Apparently, the soldier’s parachute did not fully deploy, and he fell earthward in what easily could have been his last jump.

“The parachutist had jumped from a plane at 15,000ft while part of a group training exercise conducted from nearby Camp Roberts, a California national guard base,” a post from the Special Air Service UK Facebook page explained.

“Shocked locals rushed to call the emergency services when they saw him hurtling out of the sky in free-fall.”

Through some miracle, though the paratrooper crashed through a tile roof and fell into the kitchen of the home, he missed major beams and the kitchen counter.

“Came through the roof, through the tresses and there’s not that much damage in the house,” Linda Sallady, the homeowner’s mother, told KSBY-TV. “It’s amazing. It’s mostly the ceiling, the sheetrock. He missed the counters, appliances, everything.”

Rose Martin, a nurse who lives in the neighborhood, was quickly at his side after neighbors alerted her to the incident.

“So I ran in to make sure he was OK and I checked on him and his eyes were open but I wasn’t sure if there were any injuries. I didn’t want anyone to move him.”

While the name of the soldier, his unit and the troops with whom he was training were not disclosed, “HALO jumps are usually associated with special operations units,” according to Military.com.

“The parachutist experienced issues in freefall and was required to operate his reserve [parachute],” a representative of the British Embassy said. “Although the reserve deployed, the parachutist did not have sufficient height to land on the allocated drop zone, was significantly disorientated and unfortunately hit a local resident’s house.”

The Atascadero Police Department posted about the incident, saying that while the soldier sustained moderate injuries and was taken to the hospital, it looked like he would recover.

“The parachutist was conscious but stunned with complaints of pain but no visible serious injuries,” it shared late on July 6. “The occupants of the residence were not home at the time and therefore were uninjured.

“Atascadero Fire & Emergency Services treated the injuries and assisted in the transportation of the individual to the hospital. Investigation revealed that a parachute failed to fully deploy during maneuvers by a group training at Camp Roberts. This was the only incident involved and all others participating in the jump landed safely at the designated landing field.

“We are grateful that the parachutist received only moderate injuries and that no other persons suffered injury.”

Martin echoed the sentiments of many: “It’s a miracle in my estimation, really. I mean, who lands like that without a parachute and lives?”

Continue reading: Soldier Smashes Through Roof of Home When Parachute Fails to Deploy After Jumping Out of Plane ...