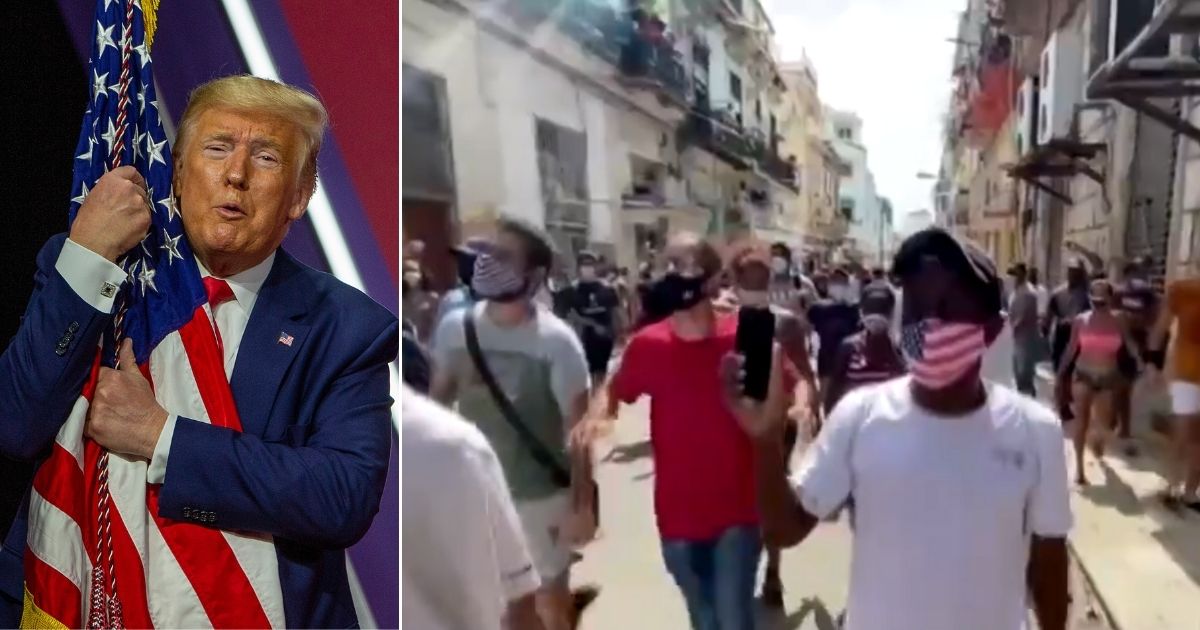 For those of you staying abreast of the protests in Cuba through the lens of domestic and digital media, the elation of watching the most serious threat to the communist regime in decades gather steam is tempered with the frustration at those bringing the news to us.

Yes, there are the powerful images coming out of the streets of the Cuban cities of San Antonio de los Baños, Cardenas and Bauta, where thousands of protesters have been marching against the privations they’ve had to endure under the government of Miguel Díaz-Canel, the successor to the barbarous Castro brothers.

This, sadly, is commingled with the media’s strange insistence the protests have everything to do with the exigencies of COVID-19 and the American embargo of Cuba, and nothing to do with the role of the oppressive, murderous, shambolic government of one of the last Soviet bloc-style communist regimes.

The slant has been dispiriting but unsurprising. Twitter, in one of the platform’s “news for you” notifications, said the protests were taking place “as the country faces shortages of COVID-19 vaccines and basic necessities.” The government and its tyrannical history went unmentioned.

The New York Times got a bit of flak when it called protesters’ shouts of “freedom” an “anti-government slogan.”

Shouting “Freedom” and other anti-government slogans, hundreds of Cubans took to the streets in cities around the country on Sunday to protest food and medicine shortages, in a remarkable eruption of discontent not seen in nearly 30 years. https://t.co/BbqQPLrNiE

While that got plenty of attention, not enough attention was paid to the fact that The Times also said protesters were “looting” from “government-run stores.”

Interesting language, given that just a year ago, the same paper ran an opinion piece by UCLA history professor Robin D.G. Kelley blasting those who were “obsessing over looting” during the George Floyd riots and arguing America “was built on looting.”

However, that was all child’s play compared with CBS News, which brought on one of its producers to claim that — even though Cuba has endured 62 years of misery under its communist regime — the administration of former President Donald Trump is what’s actually to blame here.

During a Monday segment covering the protests, correspondent Manuel Bojorquez noted, “On Cuban television, Díaz-Canel blamed the protests on the U.S. and its trade embargo for a severe impact on Cuba’s recent economic downturn.”

The network then brought on Portia Siegelbaum, its producer in Cuba. Her analysis of Díaz-Canel’s claims that the trade embargo was to blame for Cuba’s current miseries: Yeah, pretty much, but that wasn’t Trump-specific enough.

“The Trump administration passed many more regulations, many more sanctions against [Cuba], which basically has cut off all income coming into Cuba,” Siegelbaum said.

The CBS News producer added that President Joe Biden could come to the rescue — but he hasn’t, at least not yet.

“I think the Biden administration, he at least said at the beginning he was going to review this policy and make changes,” Siegelbaum said. “But nothing has happened.”

Our report on historic protests in Cuba, and the show of support in Miami’s Little Havana neighborhood

According to AFP, a senior Cuban official estimated back in January that the Trump administration’s sanctions against Cuba cost the nation “about $20 billion” through 240 various measures. That’s hardly enough to cause the miasma the communist island nation finds itself in, particularly when you consider the rest of the world has absolutely no stomach for sanctioning the human rights pariah.

While Siegelbaum was given roughly 20 seconds to her case, I can’t imagine that, given an infinite space of time to make her argument, it would have been any more persuasive.

Even the Biden White House, not particularly averse to blaming a human tragedy on the ancien régime at 1600 Pennsylvania Ave., shot down that argument.

White House press secretary Jen Psaki told reporters on Monday that Cuba’s government was the author of its own issues.

Curiously, she declined to use the word “communist” to describe the authoritarian government there, but at least she dispelled arguments like Siegelbaum’s.

Press Secretary Psaki shuts down allegations that the U.S. embargo is to blame for protests in Cuba, doubling down on her position that economic mismanagement by the Cuban government is the driving factor while STILL not mentioning “socialism” or “communism.” pic.twitter.com/IHNcrwzv5k

Cuba’s woes didn’t begin when COVID-19 hit its shores in 2020 or when Donald Trump became president in 2017 and began reversing predecessor Barack Obama’s ill-advised diplomatic rapprochement with Havana. The die was cast in 1959 when the communists came to power.

And yet, ever since Fidel Castro took over, there’s been a professional class of left-wing apologists for the government, always with an excuse for why, even if the communists weren’t good, they weren’t that bad.

There was a time when they hadn’t fully infested our media, though. That time has past.

If you wonder why independent voices such as Joe Rogan do so well in the new media sphere, consider legacy media like this. “Freedom” is an “anti-government slogan,” the protests against a despotic regime are over nothing more than shortages of vaccines and basic necessities, and you know who’s responsible for all of that? Orange Man.

And that’s not just an errant correspondent; she’s a producer.

The revolution in Cuba, if it comes, will be televised, and it’ll be brought to you by useful idiots and ideologues.

If there’s anything to suck the inspiration out of seeing people potentially rise up and throw off their shackles, it’s having it reported to us by people who don’t think what’s happening in Cuba is inspirational and who labor under the misapprehension those shackles were U.S.-made.