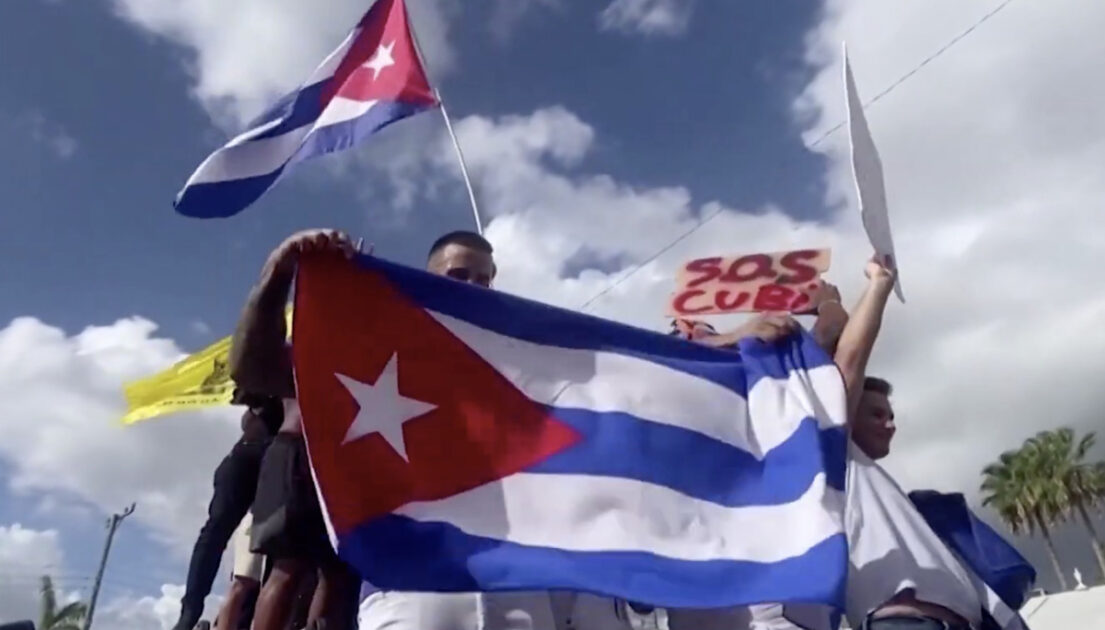 The following article, Anti-Communism Protests Erupt In Cuba, But State Dept. And MSM Say Protests About COVID, was first published on Flag And Cross.

Spontaneous protests occurred all over Cuba yesterday protesting the Communist dictatorship that has squashed freedoms for over half a century. But the leftist media has decided to frame this as anger over the handling of the pandemic, and even worse the socialists running Biden’s State Department agreed it was all about Coronavirus. Cubans protesting communism

Chanting “freedom” and calling for President Miguel Diaz-Canel to step down, thousands of Cubans joined street protests from Havana to Santiago on Sunday in the biggest anti-government demonstrations on the Communist-run island in decades.

The protests erupted amid Cuba’s worst economic crisis since the fall of the Soviet Union, its old ally, and a record surge in coronavirus infections, with people voicing anger over shortages of basic goods, curbs on civil liberties and the authorities’ handling of the pandemic.

Thousands took to the streets in various parts of Havana including the historic centre, their shouts of “Diaz-Canel step down” drowning out groups of government supporters waving the Cuban flag and chanting “Fidel.”

But wait a second, didn’t Barack Obama brag about Cuba’s wonderful healthcare when he visited with Fidel’s brother Raul in 2016? While inadequate healthcare and shortages have become a bigger problem during the pandemic and may have been the catalyst for the protests, it’s pretty clear that the Cuban people have had it with the Communist dictatorshipand that’s what they were protesting.

From the Malecón, Havana’s famous seawall near the old city, to small towns in Artemisa province and Palma Soriano, the second-largest city in Santiago de Cuba province, videos live-streamed on Facebook showed thousands of people walking and riding bikes and motorcycles along streets while chanting “Freedom!” “Down with Communism!” and “Patria y Vida” — Homeland and Life — which has become a battle cry among activists after a viral music video turned the revolutionary slogan “Homeland or Death” on its head.

“We are not afraid!” chanted Samantha Regalado while she recorded hundreds of people walking along a narrow street in Palma Soriano.

Videos of the protests from all over the country were shared widely on social media.

I have lived in Cuba for nine years and the scenes we saw today were stunning. The protests spread more quickly than anyone could have imagined. I don’t know what tomorrow will bring but the level of discontent and anger isn’t going anywhere. pic.twitter.com/K8LZyuBY1R

Frustration with the dictatorships incompetence,greed & repression is mounting rapidly pic.twitter.com/eSAr8Xrxpf

The MSM must believe they were shouting ‘We are not afraid” of COVID (but they weren’t).

We have NEVER seen a day like today in #Cuba

And, just like the pro-democracy protests in Hong Kong, there it was in the crowd, the ultimate symbol of freedom… the American Flag.

Cubans waving American flags. This is what our nation represents to the world. It is beautiful. Biden now is the time to help the Cuban people. #Cuba. @MarcoRubio @TedCruz. pic.twitter.com/9CpZbaMJbT

The streets of Cuba understand this is a symbol of freedom.

That must be triggering the folks over at the New York Times who were very busy bashing the flag on Independence Day.

Somebody should really check on NYTimes Editorial Board member Mara Gay and see if she’s okay — she had been distraught to see American flags on pickup trucks in New York shortly after Memorial Day.

If the image of Old Glory being waved in the crowd wasn’t enough, the New York Times said that they were also “shouting ‘freedom’ and other anti-government slogans.” (Screenshot since they may be shamed into deleting it, but the link to the tweet can be found here.) 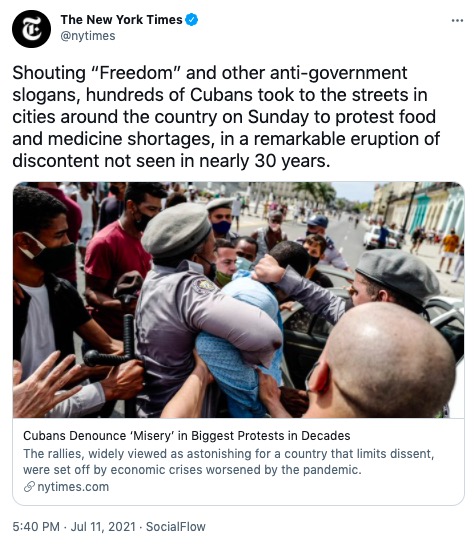 Good to know where the New York Times stands on how they view freedom. I suppose in the U.S., “freedom” may be considered an anti-Democratic Party statement, as they are pushing socialism.

That awful NY Times tweet was noticed by Senator Ted Cruz, who has a thought or two on Communism in Cuba since his family fled the island to find freedom in the United States.

I love how the NYT acknowledges that “freedom” is an “anti-government slogan.”

You’d think that the subscribership boon that they received after their fact-averse Russiagate reportage and the stealth-edited 1619 Project would allow them to hire someone who can write their tweets properly. Ah, well, at least it’s good for a laugh.

Speaking of a good laugh… here’s what a State Department official tweeted out about the protests. (It’s a screenshot for posterity, but the link to the tweet can be found here.)

COVID??? The U.S. State Department is blaming the protest on COVID? According to reports from Cuba, protesters chanted “Freedom,” “Enough,” and “We Want Liberty.” That doesn’t sound like a COVID protest. This reaction would be funny if it weren’t so sad.

While so many others — including U.S. lawmakers have spoken out about the protests, one has remained conspicuously silent. That would be former Fidel fanboy Senator Bernie Sanders.

As thousands of protesters took to the streets of Cuba Sunday evening calling for an end to the country’s communist regime, U.S. lawmakers are speaking out on social media in solidarity with the demonstrations.

However, Sen. Bernie Sanders, I-Vt., who has previously defended some of the policies of Cuba’s previous communist dictator Fidel Castro, has not yet issued a statement…

…Following his win during Nevada’s caucus in the 2020 Democratic primaries, Sanders was asked by Anderson Cooper during an interview on CBS’ “60 Minutes” why the Cuban people didn’t rise up and help the U.S. overthrow the Castro regime. Sanders replied that the dictator “educated their kids, gave their kids health care, totally transformed the society.”

“We’re very very opposed to the authoritarian nature of Cuba but you know, it’s unfair to simply say everything is bad,” Sanders explained. “You know? When Fidel Castro came into office, you know what he did? He had a massive literacy program. Is that a bad thing? Even though Fidel Castro did it?”
Source: Fox News

Remind me, what party is it that is celebrating the jailing of citizens for months for minor, non-violent charges the same way that Cuba would?

Oh, right. It’s the one that Senator Sanders wanted to lead.

Much of this Post Was First Seen At Clash Daily