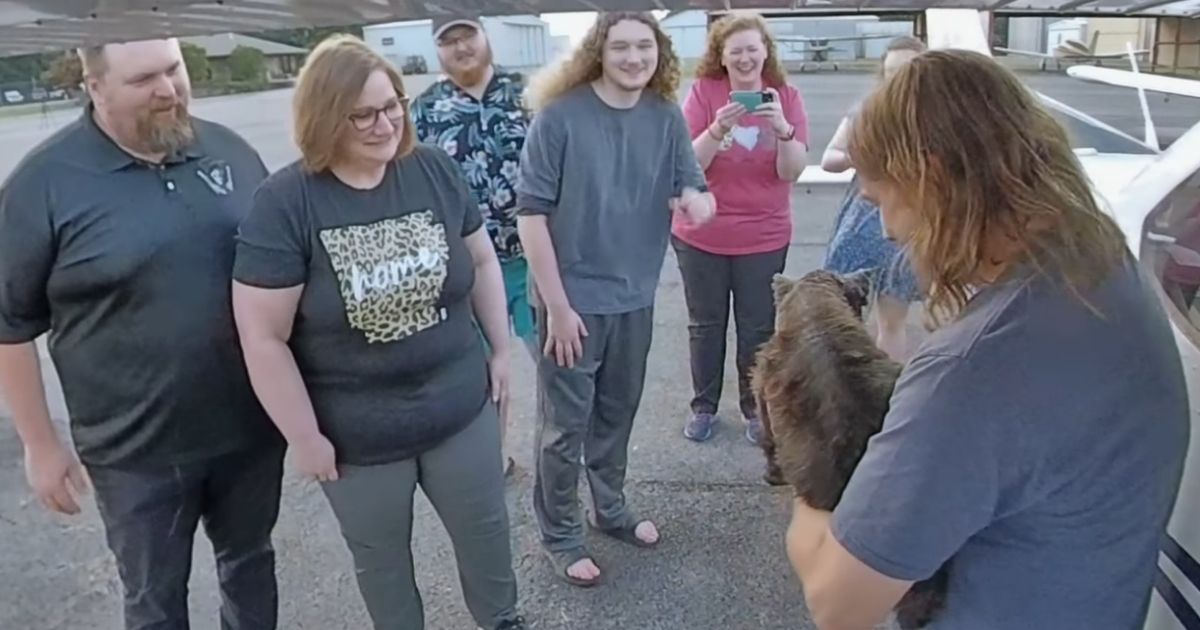 The following article, After Disappearing for 10 Years, Lost Dog Found 1,600 Miles from Home Finally Reunites with Family, was first published on Flag And Cross.

Razzle is a small, black dog owned by a family in Arkansas. In 2011, when he was six years old, he went missing.

But this year, somehow, a very old, sickly black dog showed up at an animal shelter in Northern California with a microchip that led back to the Howard family.

There wasn’t much time to come up with a plan, as Razzle’s health was very bad, with volunteers saying his situation was “dire” and that “his medical state was so fragile.”

Once rescuers realized he had a family out there, and his family realized he was still out there, they were desperate for a reunion — but there were 1,600 miles between them.

Razzle’s story dazzled readers, though, and soon a team of rescue elites banded together to ensure the dog’s final days were with his family.

According to one Facebook post, it was a woman named Debbie Newton who, with the family’s permission, picked Razzle up from the shelter and got him vet care and grooming and worked tirelessly to improve his health so he could travel.

Even with a month of top-notch rehab, vets maintained Razzle was in no shape to make the drive — even the rescuers believed he simply wouldn’t make it.

While Debbie worked with Razzle, Jennifer Colletto and Jules Beer searched for a volunteer with wings to help make the match.

Enter Jeremy Wade of California, who’d grown up in the area where Razzle’s family lived and had already planned a trip there. Wade had picked up the piloting hobby two years ago and has since participated in the Pilots n Paws charity to help with situations just like this.

“It is impossible generally to get to Arkansas without a stopover, unless [you’re] going to [Northwest Arkansas National Airport] in Fayetteville, where they sometimes have direct flights,” Wade told Fox News. “And so it was my pleasure to get to be a part of getting him home.”

“I’d just like to think of myself as a very small part of a very important chain that has to all work to try to reduce the number of homeless or neglected animals out there,” he added.

Finally, early in the morning on July 6, Razzle was on his way home.

After a stop in Santa Fe and after over 11 hours on the plane, Razzle was back in Arkansas. He was barely able to walk, but he was back in his family’s arms.

“It was so wonderful to reach in and lift him out of the crate for them to see him for the first time,” Wade said.

Since the return, photos and video of the long-awaited reunion have been circulating online.

“A couple of days ago, I had the privilege of helping Razzle the dog get back home after being lost from his family for 10 years,” Wade posted on Facebook. “See previous post for details; here is the 2 minute video I made of the journey itself and the time I got to spend with him.”

Vickey Langley, a relative who’d gotten Razzle microchipped for the family back in 2005, was also present.

“Getting Razzle back has meant the world to our family,” she said. “We have been overwhelmed with the kindness from all the people who have helped to get him home.”