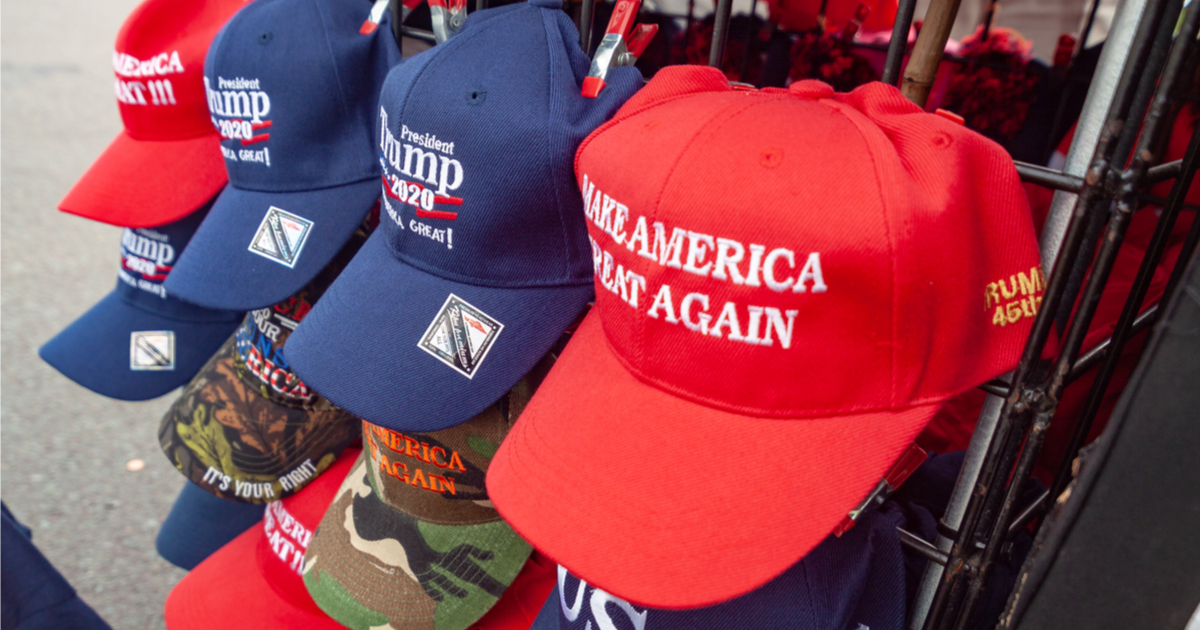 The following article, Epic Twitter Thread is Perfect Primer On Why MAGA Folks Doubt 2020, was first published on Flag And Cross.

-By K Walker via Jeff Dunetz

They call it the big lie, but many of the reasons MAGA supporters don’t believe the 2020 election results were fair were are a result of the collusion between the MSM and the deep state to sabotage the Trump candidacy and presidency from the time he came down that Trump Tower escalator to announce that he was running, This post doesn’t prove that Trump won, despite the anecdotal stories that evidence doesn’t exist. Rather this post explains why many supporters of Donald Trump believe the election was stolen from them

This guy gets it. He really, really gets it. And he says it in a way that even the lunkheads over at CNN could understand it.

Darryl Cooper is a researcher, writer, and creator of the history-based MartyrMade Podcast. Cooper is also the co-host of The Unraveling podcast with “Extreme Ownership” author Jocko Willink. 2020 election results

On Thursday, Cooper posted a 35-tweet thread on “Boomer-tier Trump supporters” and their thoughts on the 2020 election.

I’m not a Boomer, but this thread absolutely resonated with me, and I think many Lid readers will agree with this assessment.

I think I've had discussions w/enough Boomer-tier Trump supporters who believe the 2020 election was fraudulent to extract a general theory about their perspective. It is also the perspective of most of the people at the Capitol on 1/6, and probably even Trump himself. 1/x 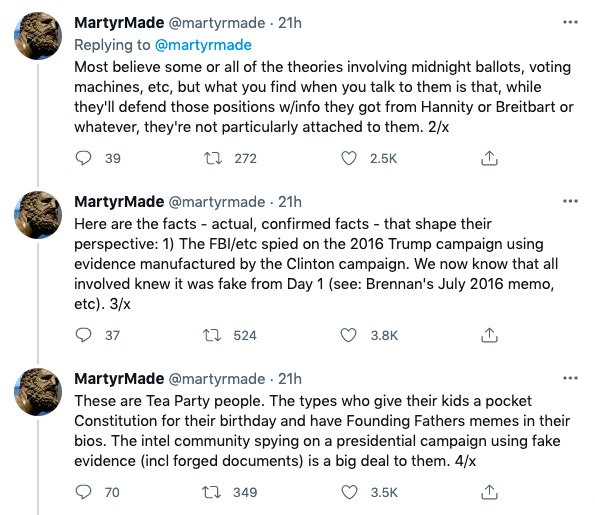 The part about the FBI spying on Trump is key. Conservatives largely support law enforcement, and this was the Federal Bureau of Investigations targeting a Republican Presidential candidate after not even giving a slap on the wrist to the Democrat candidate who would likely have gone to jail for what she had done if she had been a low-level bureaucrat instead of the Secretary of State in a Democrat administration.

And it was that very individual — the one who got off scot-free — who manufactured the case against her opponent, and everyone coalesced around the lie and covered for each other. These are facts. 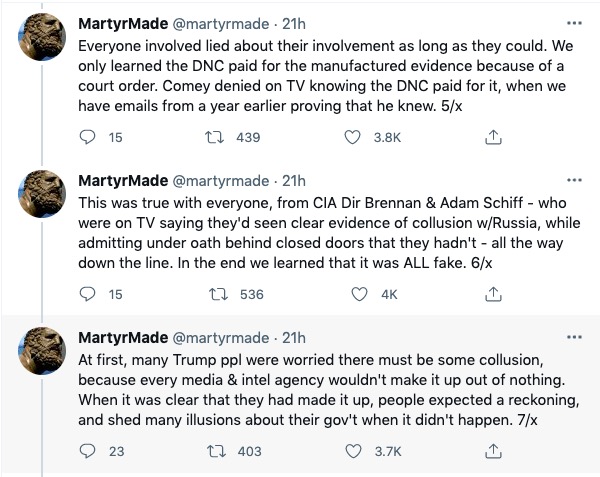 There have been no consequences for Brennan and Schiff, and they can keep going on cable news and spout absolute absurdities with no repercussions. Many conservatives that I’ve spoken to now think that there is two-tier justice — one for Democrats and one for Republicans. Just look at how the BLM/Antifa rioters have been treated compared to the MAGA crowd that went to Capitol Hill to let the Deep State know that the jig is up. 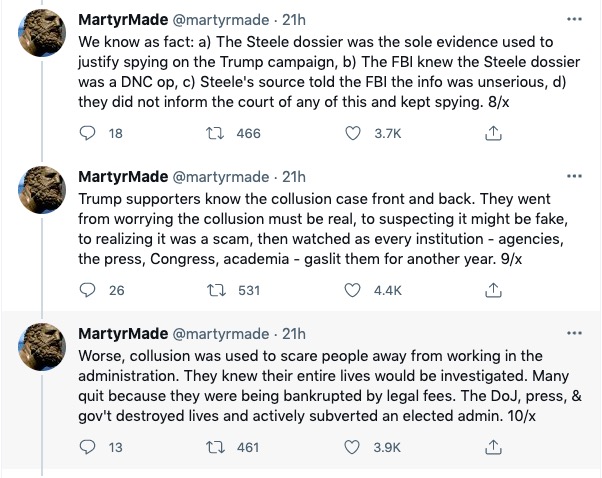 Our faith in the FBI was shattered, and our trust in the media actually declined because we finally saw that what we had long suspected was true — the press wasn’t interested in reporting facts. They’re just partisan hacks for the globalist Regime, which is largely made up of Democrats who hate the idea of American Exceptionalism. 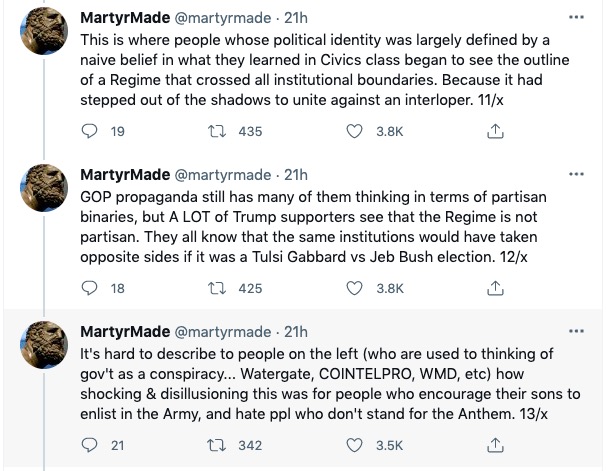 Yes! Exactly! It seems to be that it’s The Regime vs. We The People. That’s why people on the right are so concerned about the Deep State and came to Tulsi’s defense even though she’s not an ideological ally — she is an outsider, too. 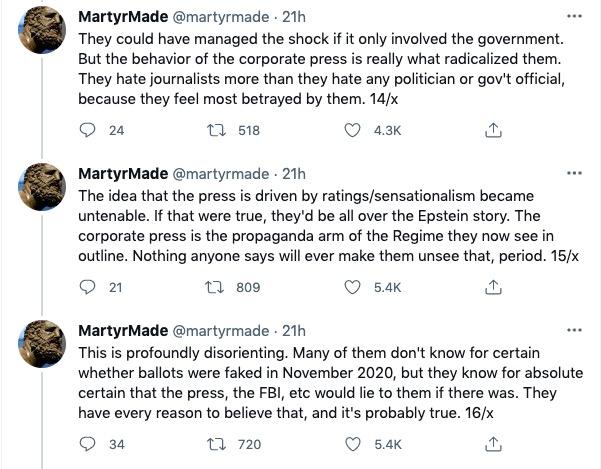 Do you trust the FBI anymore? Between the Corporate Media and the FBI, it’s a coin toss as to who is more trustworthy. 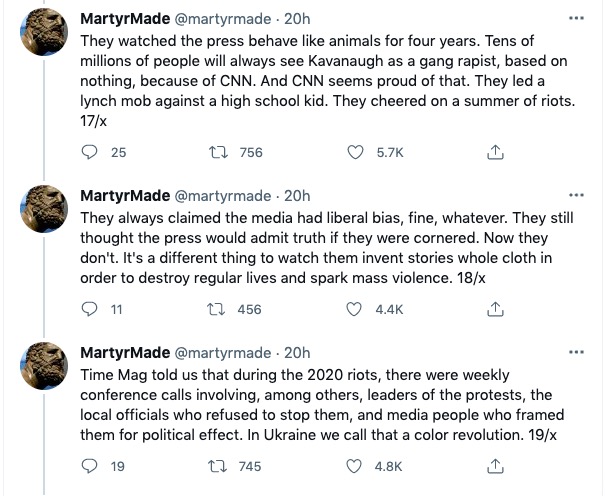 It’s not just that the Corporate Media is biased. It’s that they’re complicit. They work with the Regime to push forward the agenda and denounce those heretics that dare question them. That’s how we get the gaslighting from the Democrats that it’s actually Republicans who are the “defund the police” party — they know it’s B.S. but still spread it because it helps their cause. We’re seeing the same thing again with how the Corporate Media is trying to frame Critical Race Theory education in schools. But they did it first with Russiagate, and… it worked.

Cooper continues to explain how COVID suddenly created an opportunity for many Democrat governors to subtly change how elections are handled just in time for 2020. 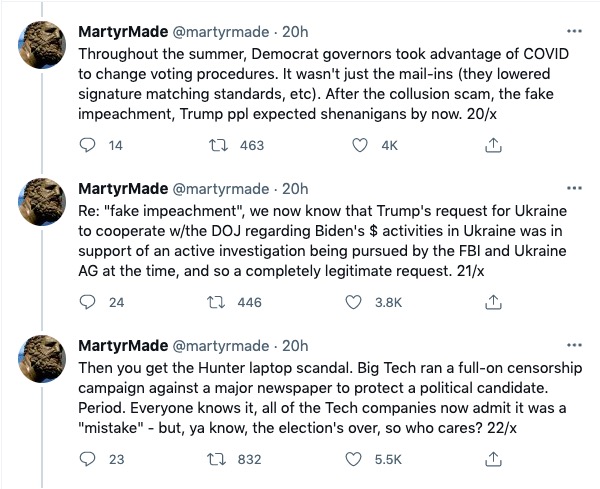 Hunter’s laptop is still dropping bombshells about his degeneracy, the extent of his corruption, and how Joe knew about it. The Corporate Media won’t touch it with a 1000-foot pole. But Don Jr.’s Trump Tower meeting was wall-to-wall coverage for weeks on every major allegedly “neutral” network and publication. 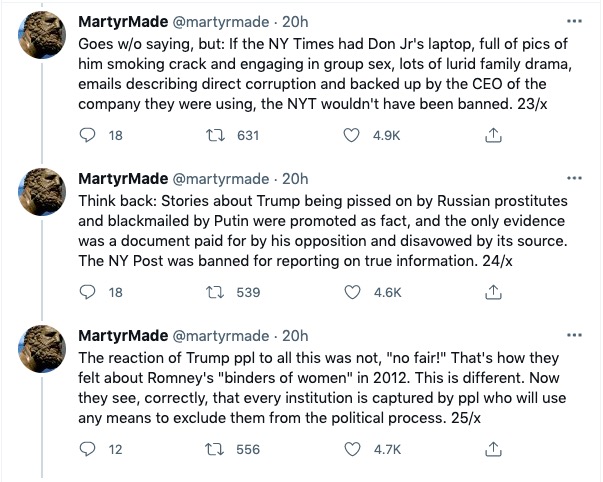 Absolute lies — that were confirmed to be lies — were shared as Gospel Truth, but actual evidence of corruption coming directly from Hunter Biden’s laptop was censored.

Remember, more than 50 former intelligence officials — without even looking at the laptop — came forward and said that the Hunter Biden laptop was likely “Russian disinformation.” That was being used to influence the 2020 election. But they were the ones influencing the election by using the dog whistle of “Russian collusion.”

Still, Trump supporters came out in droves. They knew that with this kind of opposition, it had to be a very clear victory. Trump gained millions of more votes — and in key demographics. 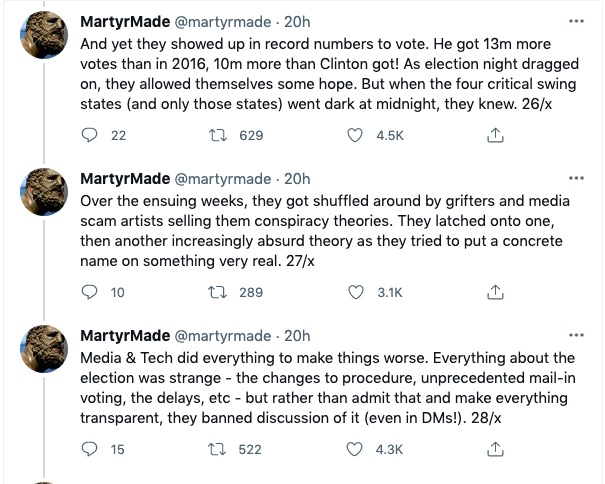 On Friday, the Federalist’s Margot Cleveland reported that “nearly 35,000 Georgians had potentially voted illegally,” and it is enough to tip Georgia. But, according to The Regime and their sycophants in the Corporate Media, saying that is apparently a “conspiracy theory” and not expressing concern over the integrity of the 2020 election. 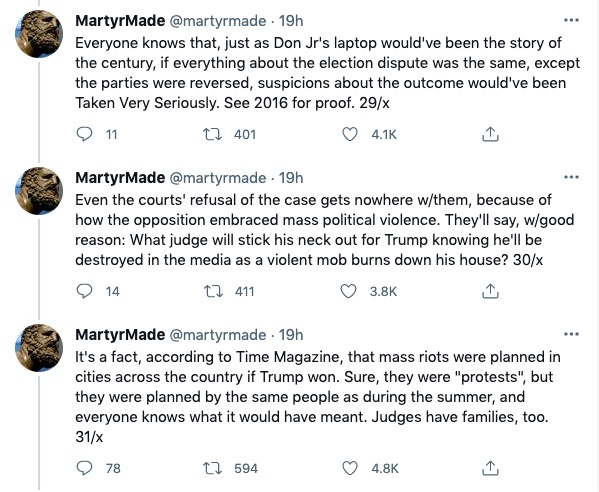 When the Democrats were out in the streets dancing when Biden was declared the winner, you could see the businesses boarded up behind them because they had been preparing for the promised riots. 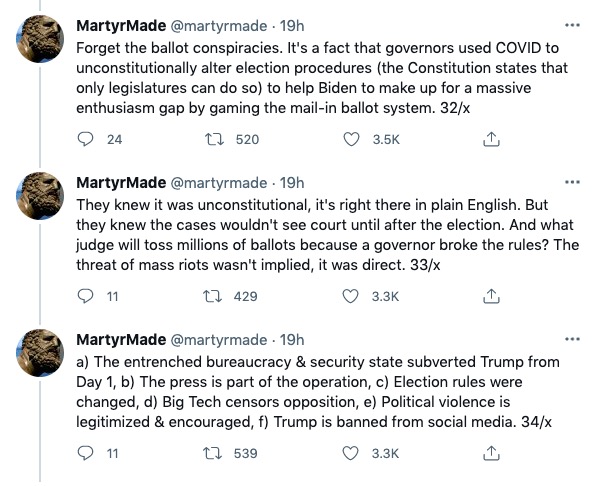 Cooper is getting some push-back on the thread — especially with the idea that there was a grand conspiracy (more like cooperation, though) between the Regime, the Corporate Media, and Democrat Governors. But Cooper responded that this is the first time a real outsider to the Regime entered the Presidential race.

There's no reason to rig an election when both candidates are regime-approved. If someone tried, the other side would have an incentive to call it out, and the interests they represented would back them. This is the first time in memory that every power center was aligned.

This is precisely why Trump’s Twitter account was so vital and why they’ve taken it away — it was too effective. He could bypass the Corporate Media and get his message out directly to the people without filters. But the Regime can’t have that. The Regime must choose, not the lowly American voter. After all, the Regime knows best, Comrade.