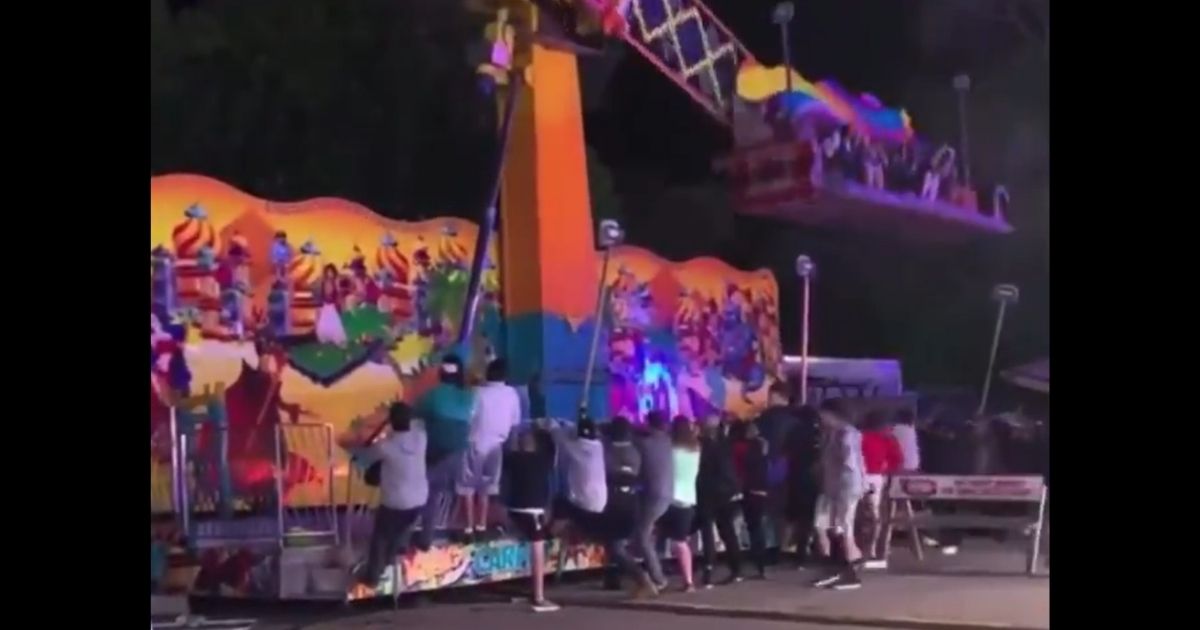 The following article, Bystanders Jump In to Help as Something Serious Goes Wrong on Wild Carnival Ride, was first published on Flag And Cross.

Who doesn’t love the thrill of a good carnival ride?

Something about the intense speed, soaring heights and rugged motion of amusement park rides excites our sense of danger — unless, of course, danger is actually present.

Video from WPBN-TV captured the moment the Magic Carpet Ride’s entire structure began swaying back and forth, threatening to tip over with passengers onboard.

As the base looked as if it was ready to tumble over, passersby watched fearfully, registering what was happening before their eyes.

Thankfully, several of them decided to jump into action.

“About a dozen people on the ground grabbed hold of the fencing around the base of the ride to try and steady it,” WPBN reported.

Bystanders at the Cherry Festival in Traverse City, Michigan rushed over to stop a carnival ride from tipping over https://t.co/OeE4sASyF6 pic.twitter.com/ulLbxgQNRB

Their courageous jump-to-action was not in vain.

Several moments after the ride came to a stop, passengers’ harnesses remained locked, witnesses said, but the fearsome turn of events gradually came to a close as they exited their seats.

As they made their way off the decking, the crowd cheered and others hugged their loved ones, the report said.

Thanks to the selflessness and courage of other festivalgoers, an event that could’ve proved disastrous turned out to not be disastrous at all.

No injuries were reported.

Festival-goers in Traverse City, Michigan rushed to keep an out-of-control carnival ride from falling over with passengers still on board on Thursday. https://t.co/dboDruyO4B pic.twitter.com/mjQqc1hGfG

It’s encouraging to witness a snippet of real America firsthand — to see the unity and kindness toward others we forget exists from time to time.

These people stepped into harm’s way, into the path of a large and potentially threatening park ride, to help a group of strangers who could possibly suffer injuries — or die — because of its instability.

The event captured on video also prevented any further harm as well.

The unstable ride was disassembled early Friday morning before the problem could occur again.

Who knows what might’ve happened if the dozen strangers-turned-heroes hadn’t listened to their calls to action.

We might be telling a different, much more tragic story today.

Continue reading: Bystanders Jump In to Help as Something Serious Goes Wrong on Wild Carnival Ride ...