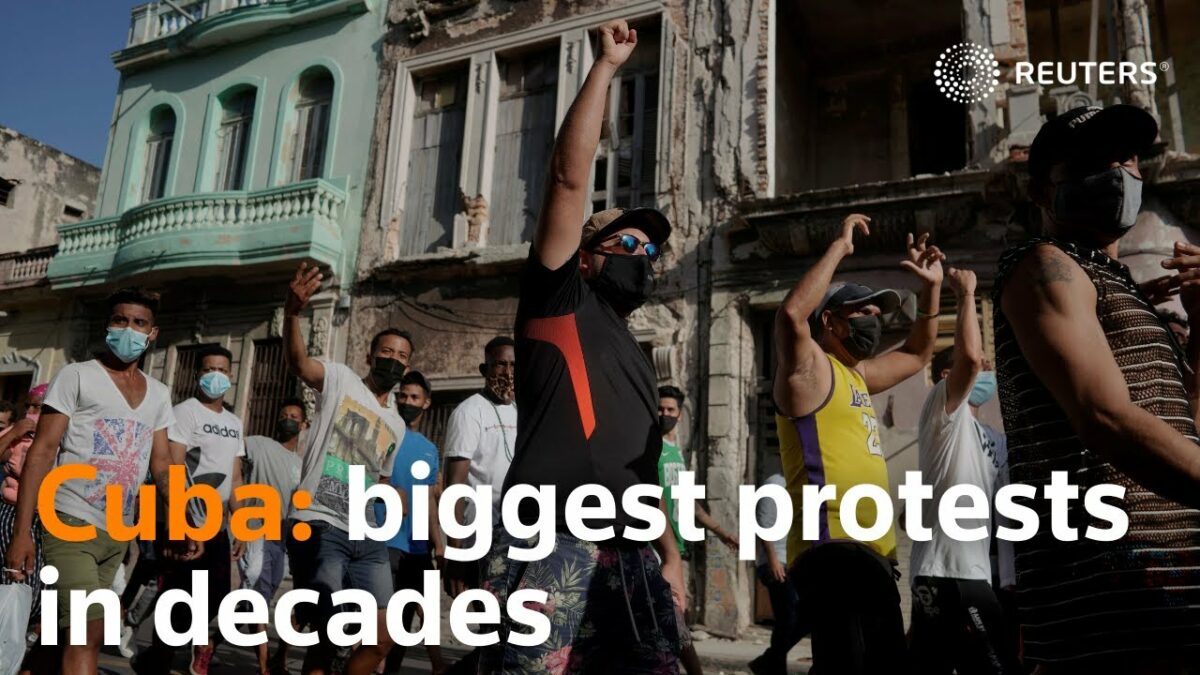 The following article, Biden Admin Calls for 'Calm' as Thousands of Cubans Rise Up Against Communist Regime, was first published on Flag And Cross.

Thousands of protestors across Cuba marched in an unprecedented demonstration of discontent Sunday against the ruling Communist government.

Cuba has never seen such an uprising against the ruling Communist Party of Cuba in over 30 years, The New York Times reported.

The people were lashing out against the ruling Communists over food shortages, rising prices and COVID-19 vaccine shortages, according to The Independent.

The voice of the people chanting “Libertad!,” which translates to “Liberty!,” and shouts of “We are not afraid!” echoed on the streets of Cuba’s capital city Havana. Some of the protestors were waving the American flag as they shouted for freedom.

This is deeply moving.

Watch as Cubans wave the American flag while marching against the island’s 62 year-old communist dictatorship on the streets of Havana.

Never forget what America represents to millions across the world. #SOSCuba

Never seen images from #Havana. Thousands are mobilising across #Cuba demanding the end of the communist dictatorship while screaming “we are not afraid…we are not afraid.”#SOSCuba #Democracypic.twitter.com/QSomExnzDw

In what seemed to be a rebuke of Fidel Castro’s “Patria O Muerte (Homeland or Death)” slogan, some of the protestors chanted “¡Patria y Vida! (Homeland and Life!)”

The display of the statue during the protests was a powerful symbol in a country known for restricting religious practice after the Communist seizure of power in 1959.

The COVID-19 pandemic which stopped vital tourism revenue from flowing into the country was the straw that broke the camel’s back after years of Communist repression, The Times reported.

The Communist government of the country on Sunday blamed the United States for the island country’s economic situation.

“Cubans know perfectly well that the government of the United States is principally responsible for Cuba’s current situation,” Cuba’s foreign ministry said in a Twitter post. “Cuba and its streets belong to the revolutionaries.”

Cuba’s President Miguel Díaz-Canel claimed, without providing evidence, “a group of counterrevolutionary people, mercenaries” funded by the U.S. government “set up this type of demonstration, at a time when we have to focus on how we care for those who are suffering.”

“We are ready for everything. We will be in the streets fighting. We are calling on communists and revolutionaries to go to the street and confront the protests today and everyday,” Díaz-Canel said.

Some of the demonstrators hurled stones at police officers, The Associated Press reported.

“The people came out to express themselves freely, and they are repressing and beating them,” Rev. Jorge Luis Gil, a Roman Catholic priest, told the AP.

When several people took out their smartphones to broadcast the march and the police response, the Communist regime responded by shutting down internet connectivity.

I warned about this earlier today.

It is happening and will continue.

By the way, they use a system made, sold & installed by #China to control and block access to the internet in #Cuba. #SOSCuba #PatriaYVida https://t.co/d3a3DkGR59

AP photographer Ramón Espinosa seized covering Havana protests today. Whatever your view on the news, the civilized condemn when journalists are hurt documenting it. pic.twitter.com/0pfUUrLcnc

The Biden administration’s Acting Assistant Secretary for the State Department’s Bureau of Western Hemisphere Affairs Julie Chung was slammed by critics on social media for tying the protests to COVID-19.

“Peaceful protests are growing in #Cuba as the Cuban people exercise their right to peaceful assembly to express concern about rising COVID case/deaths & medicine shortage. We commend the numerous efforts of the Cuban people mobilizing donations to help neighbors,” Chung wrote in a Sunday post on Twitter.

Peaceful protests are growing in #Cuba as the Cuban people exercise their right to peaceful assembly to express concern about rising COVID cases/deaths & medicine shortages. We commend the numerous efforts of the Cuban people mobilizing donations to help neighbors in need.

According to Chung’s Twitter bio, posts expressing her viewpoint must be signed with her initials “JC.” However, this post did not have her initials, leaving netizens to wonder if she was expressing her personal opinion or that of the Biden administration.

Fox News‘ request for clarification was not immediately answered by the Department of State.

Why is it so hard for @potus & the people in his administration to say that? #SOSCuba #PatriaYVida https://t.co/vLt8SCUXeK pic.twitter.com/gP0KapjvnQ

“Why is it so hard for @potus & the people in his administration to say that?” Rubio asked.

Chung then put out another Twitter post stating “We are deeply concerned by ‘calls to combat’ in #Cuba. We stand by the Cuban people’s right for peaceful assembly. We call for calm and condemn any violence,” without specifying who is making the “calls to combat.”

We are deeply concerned by “calls to combat” in #Cuba. We stand by the Cuban people’s right for peaceful assembly. We call for calm and condemn any violence.

Chung was then asked by a Twitter user, “Who’s being violent in Cuba, Julie? Where are the ‘calls for combat’ coming from? Why can’t you condemn the communist regime? You embody everything wrong with the State Department.”

Who’s being violent in Cuba, Julie?

Where are the “calls for combat” coming from?

Why can’t you condemn the communist regime?

You embody everything wrong with the State Department.

It took a day since the protests began for U.S. President Joe Biden, a Democrat, to gather the courage to finally issue a statement on the protests.

“We stand with the Cuban people and their clarion call for freedom and relief from the tragic grip of the pandemic and from the decades of repression and economic suffering to which they have been subjected by Cuba’s authoritarian regime,” a White House news release stated.

“The Cuban people are bravely asserting fundamental and universal rights. Those rights, including the right of peaceful protest and the right to freely determine their own future, must be respected. The United States calls on the Cuban regime to hear their people and serve their needs at this vital moment rather than enriching themselves.”

Continue reading: Biden Admin Calls for 'Calm' as Thousands of Cubans Rise Up Against Communist Regime ...

Ask any Cuban who has escaped to America which form of government they prefer. Communism or Capitalism.

biden “calling for calm”? Does that mean he ( by he, means his handler) is calling for the Cubans to stand down and knuckle under to the communist in control?