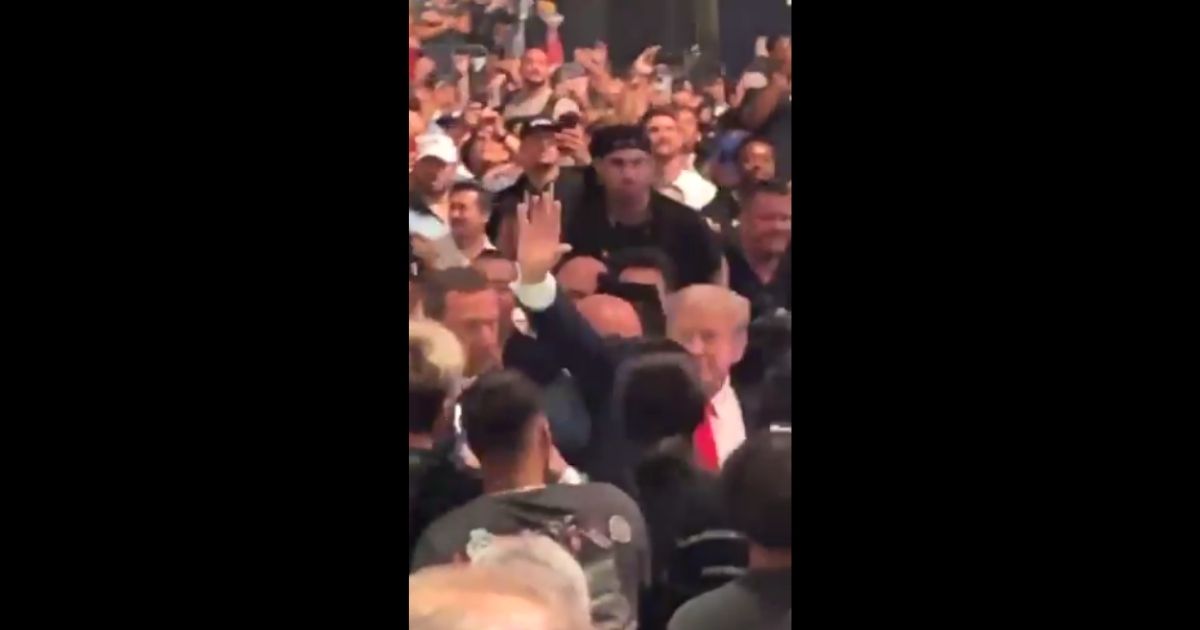 For many fans at the UFC fight Saturday in Las Vegas, there was only one big winner, regardless of what happened inside the caged octagon.

Former President Donald Trump drew a hero’s welcome from fans who had come to see the fight between Conor McGregor and Dustin Poirier.

Trump entered T-Mobile Arena through the fighter tunnel before the welterweight bout that took place between Gilbert Burns and Stephen Thompson that immediately preceded the main attraction, according to USA Today.

There were, of course, boos to be heard as Trump entered through a phalanx of raised cell phones that recorded him smiling as he acknowledged his supporters.

But as those began to emerge, massive chants of  “U-S-A” emerged to drown out the boo-birds.

UFC President Dana White said Trump’s presence was nothing more than “two friends, who are fight fans, watching a fight,” according to The Hill.

The much-awaited fight between McGregor and Poirier ended swiftly.

McGregor’s left leg buckled, leading the doctor to stop the fight, giving a TKO to Poirier, according to ESPN.

White later said the injury was to McGregor’s lower tibia.

“This is not over!” McGregor shouted before he was transported to a hospital, according to the New York Post.

Poirier said the rivals “are gonna fight again, whether it’s in the octagon or on the sidewalk.”

White said another rematch is likely.

“The fight didn’t get finished,” he said. “You can’t have a fight finish that way. We’ll see how this whole thing plays out. Who knows how long Conor is out? When Conor is healed and ready to go, we’ll do the rematch, I guess. Poirier will do his thing until Conor is ready.”

The fight had been the third between McGregor and Poirier. Mcgregor won the first with a first-round knockout in 2014, according to the Post. Poirier won the second in January of this year with a second-round knockout, as ESPN reported.