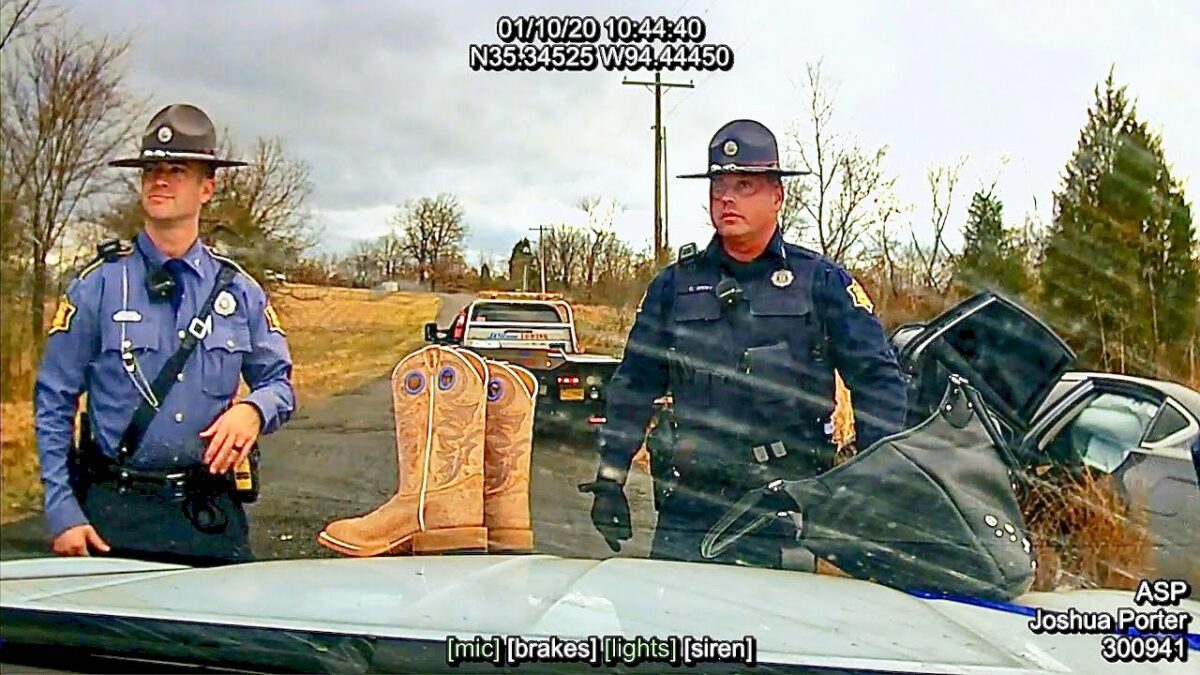 The following article, Man on Run Screams Across State Line at Over 100 MPH, Relentless Arkansas Trooper Has Him in a Ditch Within Minutes, was first published on Flag And Cross.

Being a police officer is one of the most under-appreciated jobs in the United States today. In addition to facing fierce criticism from the political left, cops must put their lives on the line to control criminals and keep the community safe.

A recently released video of a police chase from 2019 provides an excellent example of the demands law enforcement officers face every day.

In the dashcam video posted to YouTube by Real World Police, Arkansas State Police Trooper First Class Joshua Porter can be seen chasing a gray Nissan that fled from a traffic stop.

The heart-racing video is below. (Warning: Some strong language from Porter at the end of the chase.)

The stop was initiated because Porter had run the vehicle’s license plate with state records and learned the tag did not match the description of the vehicle on file.

“I told the driver, Israel Miranda-Zapata, and the passenger, Randy Turpin, who I was and why I pulled them over,” Porter wrote in a report posted with the video. “Israel stated it was his vehicle and he must have put the wrong license plate on the vehicle.”

“Israel gave me the fake name of Israel Del Rio with a date of birth of 1/13/1990. I told Israel that I was going to write down the VIN since he didn’t have any paperwork on the vehicle. I copied the VIN down and started to return to my car. At this time the vehicle began to flee.”

In the video, Porter chased Israel as the runaway driver recklessly wove in and out of traffic traveling south on I-540. According to the report, Israel reached speeds of up to 130 miles per hour.

Eventually, Israel crossed the state line into Oklahoma. Around that time (about the 7:35 mark in the video) an officer on the radio told Porter to “put him in a ditch.”

Turns out, that wasn’t necessary.

After a few more minutes of chasing, Israel veered onto a side road and briefly lost Porter. However, the trooper picked up the trail again despite the rural roads. The chase ended with Porter finding Israel’s vehicle driven into the side of a one-lane country road.

Although Porter didn’t directly put Israel’s vehicle in the ditch, he kept the pressure up and the fleeing suspect eventually ended up eating dirt on his own. Thankfully, it looks like nobody was hurt during this chase despite the high speeds.

After Israel wrecked the car, he attempted to flee on foot. Eventually, Porter used a Taser on Israel and successfully handcuffed both him and Turpin.

During the arrest, Porter delivered Israel some additional bad news — since he’d fled from Arkansas into Oklahoma, he would face felony charges in two separate states.

According to the report posted to YouTube, a check on the vehicle’s VIN confirmed it had been stolen. Items found inside the car included “a used syringe, a baggie containing ~11.3 grams of a crystalline substance, and multiple empty baggies.”

According to Real World Police:

“On June 18, 2020, Miranda-Zapata pleaded guilty to felony fleeing, driving on a suspended license, possession of drug paraphernalia, and possession of a controlled substance.”

Miranda-Zapata had his jail time deferred, most likely due to COVID-19, Real World Police reported.

However, any sense of freedom was likely short-lived. An Arkansas man with the same name was arrested on federal charges in connection with a year-long investigation regarding methamphetamine trafficking throughout the Razorback State, according to a news release from the Justice Department’s Western District of Arkansas.

From the sheer recklessness of the driving in the video — where the lives of countless motorists were placed at risk because Miranda-Zapata was running from the law, it’s clear that this is a dangerous man who needed to be taken into custody in order to ensure others’ safety. Thanks to the brave actions of Porter, he was eventually stopped.

Since 2019, the jobs of police officers have only gotten harder. It is important to recognize the lengths to which cops are willing to go to protect other citizens, and we should appreciate the sacrifices they make every day.

Continue reading: Man on Run Screams Across State Line at Over 100 MPH, Relentless Arkansas Trooper Has Him in a Ditch Within Minutes ...

I served in the Marines and Vietnam and have a relative that has is now an LEO: American Law Enforcement Officers are often more at risk as the military with less appreciation.We need to show our appreciation for their work at keeping America a civil nation.