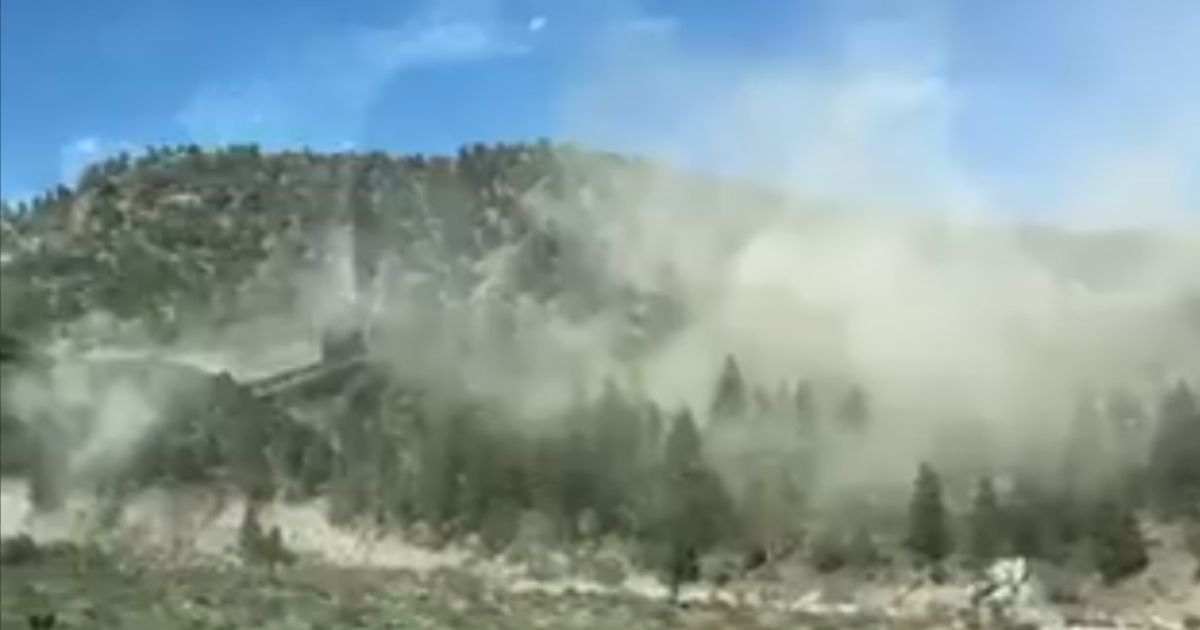 The following article, Watch as Quake Swarm Rips Through Sierra Nevadas, Peaks at a Powerful Magnitude 6.0, was first published on Flag And Cross.

A 5.9 magnitude earthquake shook parts of California and Nevada Thursday afternoon, and one video of the event shows the true power of such a quake.

The United States Geological Survey reported the tremor was initially classified as a 6.0. The earthquake was later updated to a 5.9.

“The earthquake struck about 20 miles southwest of Smith Valley, NV. Perceived shaking for the quake was very strong. The event was widely felt, with close to 15,000 ‘Did You Feel It?’ reports thus far submitted,” the USGS added.

Reports from people who felt the tremor quickly took over social media, but one video really stood out.

A Twitter user named Brett Durrant reported being in the vicinity of Coleville, California, near the Nevada border shared video of dust clouds being kicked off of mountains and rock slides:

Earthquake hit us on I395 near Coleville, CA! Boulders all over the road! #earthquake #California #roadtrip @ABC pic.twitter.com/ZoTxLnC6r8

In another video captured by Durrant, boulders were shown to have been thrown onto a roadway.

Scientists warned of the potential for aftershocks:

What will happen next? Well, we can’t precisely predict earthquakes, but we can estimate their probabilities. Smaller aftershocks will likely continue. The probability of a larger quake is small. Our full aftershock forecast is here, updated regularly: https://t.co/RCL91ux4Yg pic.twitter.com/Zat9Ec1s8w

The M5.9 this afternoon is a classic normal faulting earthquake for eastern California. As is common in this region, there are a lot of aftershocks – 10 above M3 in the first hour.https://t.co/b4WBvbM00x pic.twitter.com/8bwslx5pxj

As of Friday, many smaller tremors had been reported, although none were as significant as the original quake:

17 hours later and the aftershocks from yesterday’s 6.0 quake are still rolling inhttps://t.co/P6al7Ul8Qn pic.twitter.com/GNap2yOBLK

Additionally, no injuries were reported from the 5.9 magnitude quake. People as far away as San Francisco said they felt the shaking, while a woman near the epicenter in Walker, California, explained her experience to the NBC Bay Area staff and Associated Press.

“The ground was shaking pretty bad, and then everything started falling,” a woman who manages a coffee shop named Carolina Estrada said. “We ran out of the building.”

Estrada said “boulders the size of cars” were launched onto U.S. 395, and that the shaking lasted for around 30 seconds.