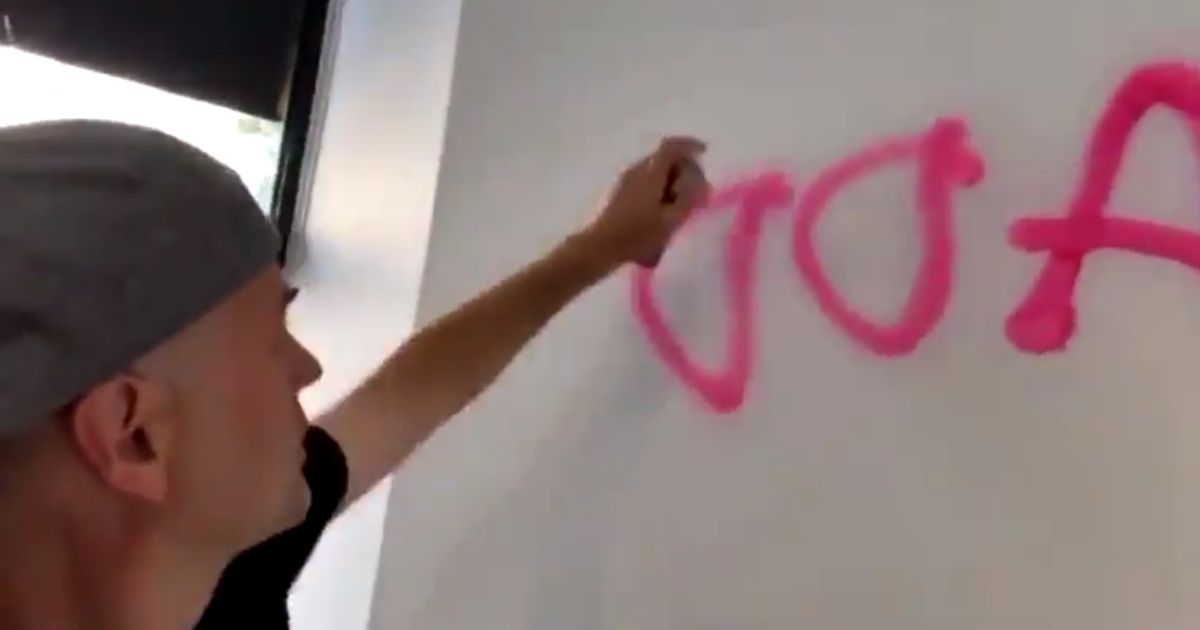 When people believe they’re being lied to and treated like they’re stupid, they have a tendency to lash out.

Now, this is not to say that lashing out is always the right response, but if someone behaves irrationally in the face of absurdly patronizing treatment, it certainly doesn’t negate the insulting nature of the person who is, indeed, patronizing them.

Such is the case with artist-musician-filmmaker-activist Rod Webber, who was recently arrested for attempting to vandalize the Manhattan art gallery that has been slated by the White House to provide ethical oversight to Hunter Biden’s budding art career.

Yes, this is all, every word of it, real life.

As the U.K. Daily Mail reported, Webber livestreamed his antics at the Soho gallery on Friday, asking his followers before he barged inside, “Who’s ready for a weird livestream?”

Let’s hope they were, because that’s certainly what they got. Just before being tackled by a staff member, Webber attempted to write “Daddy War Crimes” on the walls of the Georges Bergès Gallery with what the Daily Mail said appeared to be spray paint, although the vandal said it was hair spray, which could be easily removed.

“As we all know, going back for many, many years — roughly 40 years — Joe Biden has involved himself in all kinds of shenanigans,” he told his followers at the start of the livestream.

“Ask any politician: You can’t avoid being corrupted by the office. Maybe he went in with good intentions, but he’s been corrupted over the years. He’s worked with segregationists, Klansmen. And now, I don’t even know what’s going on with this gallery situation, but he can’t stop bombing Syria or Iraq and someone should say something about it, so let’s go see Hunter Biden’s gallery.”

According to a witness, Webber was taken down by an employee of the gallery just after he began writing, who informed him he was making a “citizen’s arrest.” Webber also apparently dropped a bundle of bills on the floor in the midst of the chaos, as well.

NYPD arrived on the scene shortly after the scuffle and Webber was subsequently arrested.

The activist/provocateur @rodwebber gets detained (& reportedly arrested) after apparently trying to spray paint “Daddi Warcrimes” in pink hairspray on the wall of the NY art gallery planning to sell HUNTER BIDEN’s artwork for $75k-$500k. https://t.co/AscflabjNc pic.twitter.com/zn0Tvcmgcp

When a reporter from the Daily Mail managed to ask him as he was being led to a police cruiser why he had tried to vandalize the gallery, Webber shouted, “Because Hunter Biden is helping to launder money for his godfather. That’s why Daddy War Crimes were the words on the wall.”

“Biden is here to launder money for the oligarchs and to do business for his masters to hurt brown people across the other side of the globe.”

A very zany and certainly illegal way of making a very good point — Webber might be a bit nutty, but his suspicions are certainly not fabricated out of thin air.

In fact, they’re rather well-founded.

His stunt came on the same day White House Press Secretary Jen Psaki glowingly assured the American public that any concerns over the high asking price for amateur Hunter Biden’s artwork, which is set to be sold out of the Georges Bergès Gallery in the fall, will be assuaged by the fact that any buyers would be totally anonymous.

Yes, this is actually the White House’s strategy for dissipating any accusations of influence peddling and money laundering. The American people may never know who is willing to pay $100,000 for a canvas that the first son splattered with paint, but don’t worry, he won’t either!

“White House officials have helped craft an agreement under which purchases of Hunter Biden’s artwork — which could be listed at prices as high as $500,000 — will be kept confidential from even the artist himself, in an attempt to avoid ethical issues that could arise as a presidential family member tries to sell a product with a highly subjective value,” The Washington Post reported earlier this week.

Hunter Biden, of course, has a long history of business deals that give off the distinct impression that he’s been using his father’s name and position to line his own pockets — and possibly also the senior Biden’s — so naturally, concerns had indeed arisen when it was revealed his amateur art would be priced between $75,000 and $500,000, figures that are entirely unheard of for a first-time artist.

“After careful consideration, a system has been established that allows for Hunter Biden to work in his profession within reasonable safeguards,” Psaki told reporters at a Friday media briefing, according to an official White House transcript of her remarks.

“And any offer out of the normal course would be rejected out of hand.”

And who, you might ask, is to oversee these iron-clad ethical assurances?

Why, the owner of the art gallery himself!

“Under an arrangement negotiated in recent months, a New York gallery owner is planning to set prices for the art and will withhold all records, including potential bidders and final buyers. The owner, Georges Bergès, has also agreed to reject any offer that he deems suspicious or that comes in over the asking price, according to people familiar with the agreement,” The Post reported.

Or as Psaki reassured the press pool, “The gallerist will not share information about buyers or prospective buyers, including their identities, with Hunter Biden or the administration, which provides quite a level of protection.”

Yep, the White House is actually outsourcing its ethical oversight to an art dealer and appears to expect our suspicions to be quelled by this jaw-dropping arrangement.

What’s really insane about this whole thing is that, if we are indeed expected to believe that this “level of protection” would actually prevent any ethics breaches, it still confirms that the Biden family couldn’t possibly help themselves from engaging in a pay-for-play scheme and needs to be protected from itself.

A far more obvious level of protection would be for the identity of those buying Hunter’s paintings to be completely clear and transparent to the American public so that the proper entities could more closely monitor any political relationships between the buyers and the Biden administration. But no; instead, we have no idea who is forking over massive amounts of cash to this notoriously shady son of the sitting president.

It’s a look so bad, in fact, that it’s being slammed by people who served as ethics advisers under former President Barack Obama, which really says something.

“They have outsourced government ethics to an art dealer,” former Office of Government Ethics chief Walter Shaub said during a Friday interview on CNN, as reported by National Review.

Adding that as Psaki had mentioned “industry standards,” he said we’re talking about “an industry that’s notorious for money laundering. There’s no standards in that industry.”

“There’s nothing we can do to monitor to make sure that Hunter Biden or anyone in the White House doesn’t find out that the dealer keeps his or her promise, that the buyers don’t call the White House, ask for a meeting and say, ‘Hey, I just bought the president’s son’s art for $500,000,'” Shaub explained.

Shaub is not the only one slamming the Biden White House for this crooked agreement, either.

“The whole thing is a really bad idea,” said Richard Painter, who served as former President George W. Bush’s ethics lawyer toward the end of his second term.

“The initial reaction a lot of people are going to have is that he’s capitalizing on being the son of a president and wants people to give him a lot of money. I mean, those are awfully high prices,” he told The Post.

This all comes as evidence from the so-called “laptop from hell” that now-President Joe Biden had far more involvement with his son’s overseas business than he has emphatically claimed keeps piling up.

Were he any other politician (*cough* a Republican), Joe Biden’s career would have been sunk long ago by his son’s questionable business deals and sordid history of drug use, prostitution, firearm crimes and conspicuous evidence that he was selling access to his father.

It’s an insult and a slap in the face of the American people that the White House thinks we are this stupid. So while I certainly cannot and would never endorse Webber’s gallery stunt, boy, do I understand his outrage over this latest glaring absurdity from the people hellbent on convincing us that the Biden family always keeps its nose clean when there is a mountain of evidence to the contrary.

How about 10% for “THE BIG GUY” DONT YOU THINK Joe bite-me gets any funds from Hunter,the “cheese smoking ” looser of the bite- me family?