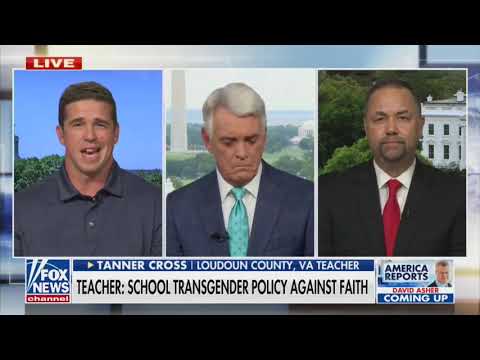 The following article, Judge Rules in Favor of Christian Teacher Who Refused to Use Trans Pronouns; School District Vows to Keep Fighting, was first published on Flag And Cross.

A school district in northern Virginia has appealed to the state’s Supreme Court a judge’s order to reinstate a teacher who does not want to use “gender-expansive” pronouns.

Loudoun County Public Schools placed Tanner Cross, a physical education teacher at Leesburg Elementary School, on paid administrative leave after Cross told the school board in a meeting that he will not use ‘preferred’ pronouns because his allegiance belongs to God.

“I’m a teacher, but I serve God first, and I will not affirm that a biological boy can be a girl and vice versa, because it’s against my religion,” he said during a May 25 meeting, according to WUSA-TV. “It’s lying to a child. It’s abuse to a child. And it’s sinning against our God.”

Cross made the comments when he was voicing his dissent over a  proposed district policy that would force teachers and school staff to call “transgender and gender-expansive students” by the name, pronouns and gender they choose.

Shortly after Cross expressed his opinion, the school district placed him on leave.

The district said Cross’ decision to voice his dissent through those comments in the school board meeting was “disruptive” to school operations, WUSA reported.

Cross then approached the court for a temporary restraining order against his suspension, which Virginia 20th Judicial Circuit Court Judge James Plowman granted on June 8, according to Fox News.

“This case is not about how schools should treat students who struggle with gender dysphoria. It is about whether public schools can punish a teacher for objecting, as a private citizen, to a proposed policy, in a forum designated for the purpose of considering whether to implement such policies, where the policy would force him to express ideas about human nature, unrelated to the school’s curriculum, that he believes are false,” Cross’ lawsuit stated, according to WUSA.

Plowman ruled that the school district’s decision was not constitutional, according to the outlet. He wrote in his order that the district’s allegations fail to stand against Cross’ First Amendment right, Fox News reported.

On June 22, several parents spoke out in defense of Cross in a board meeting, saying the school district’s efforts are bound to fail and will end up being a drain on taxpayer money, according to Fox.

The school district seeks to overturn this court order so that it can “relieve” Cross of his duties, Fox reported.

A school district spokesman said Thursday that it has appealed to the Virginia Supreme Court, according to multiple outlets.

WUSA reported that it isn’t known if or when the case would be heard.

“Public schools have no right to suspend someone simply for respectfully providing their opinion at a public meeting,” Tyson Langhofer, an attorney and the director of the Alliance Defending Freedom Center, said of the district’s appeal, according to Fox News.

“The lower court’s decision ordering Tanner’s reinstatement was a well-reasoned application of these facts to clearly established law, so there is no reason for the Virginia Supreme Court to take this appeal,” he said.

“The school district wants to force Tanner to endorse its ideals and shut down any opposing views. That violates the Constitution and laws of Virginia, and so did the school’s move to place Tanner on leave.”

In a statement, the school district said several students and parents at Leesburg Elementary have expressed “fear, hurt and disappointment about coming to school,” according to WUSA.

“While LCPS respects the rights of public-school employees to free speech and free exercise of religion, those rights do not outweigh the rights of students to be educated in a supportive and nurturing environment,” the district stated.