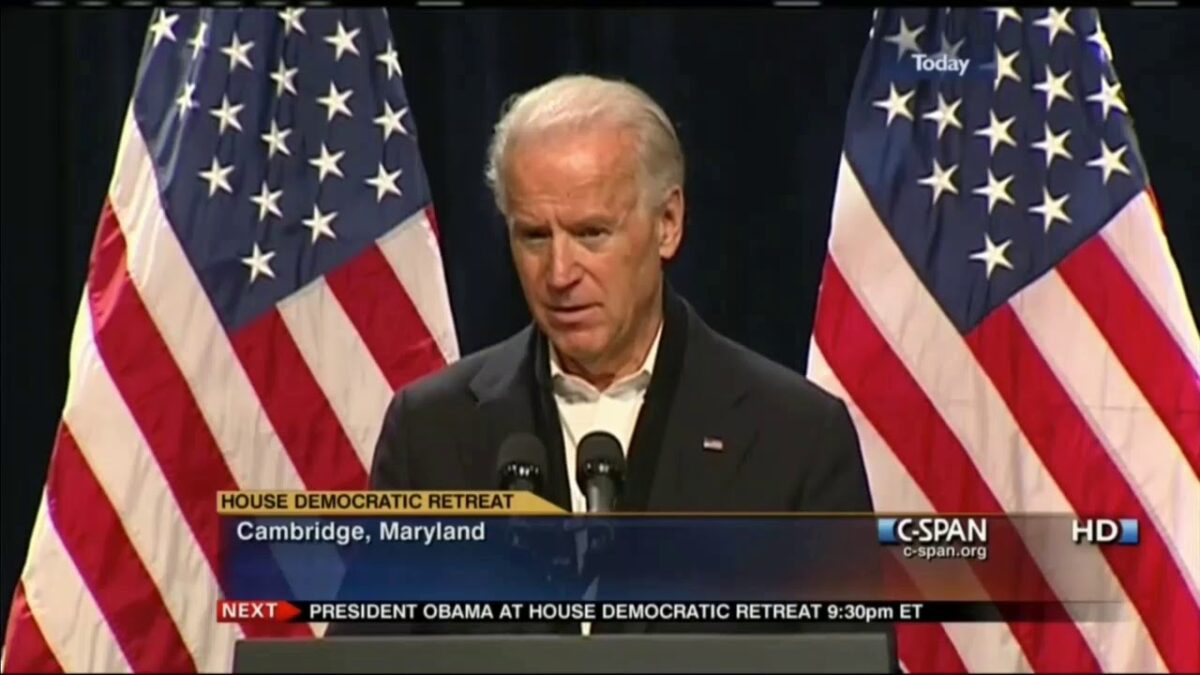 The following article, Biden's Brain Freezes When He Tries to Make 2 Simple Points, was first published on Flag And Cross.

President Joe Biden’s brain malfunctioned on Thursday as he attempted to explain why the credit for the 2011 death of terror mastermind Osama bin Laden belongs to him.

Biden was making prepared remarks about the drawdown of U.S. troops in Afghanistan.

“Our military mission in Afghanistan will conclude on Aug. 31,” Biden said to pen his comments. “The drawdown is proceeding in a secure and orderly way, prioritizing the safety of our troops as they depart.”

“We did not go to Afghanistan to nation-build. And it’s the right and the responsibility of the Afghan people alone to decide their future and how they want to run their country,” he also said.

Arguably, Biden was already taking credit for something that belonged to former President Donald Trump — which was bringing about the beginning of the end to the forever war in the country. He’s also making a quagmire of it.

Trump announced his intent to end that war last fall, and the process began.

But later in his speech Thursday, Biden attempted to take credit for a decision made by his then-boss in 2011, former President Barack Obama. That decision was to give the go-ahead for troops to send terror leader Osama bin Laden to hell at the wrong end of a rifle.

“I opposed permanently having American forces in Afghanistan. I argued, from the beginning, as you may recall — it came to light after the administration was over, last — our administration — no nation has ever unified Afghanistan. No nation. Empires have gone there and not done it,” Biden said, according to an official transcript provided by the White House.

“The focus we had — and I strongly support it — and you may remember I physically went to Afghanistan,” he added. “I was up in that pass where Osama bin Laden was — allegedly escaped or — out of harm’s way.”

Biden’s brain then malfunctioned momentarily as he explained that there were two reasons why the U.S. went into Afghanistan, and when he did finally spit both of them out, one of them was a complete stretch of the truth.

Joe Biden forgets what he’s talking about and then attempts to take credit for the Osama bin Laden raid that he opposed. pic.twitter.com/WHJhFNcBXz

“We went for two reasons: one, to…” Biden paused for an awkward amount of time. He finally finished the sentence, adding that the first reason was to “bring Osama bin Laden to the gates of hell, as I said at the time.”

“The second reason was to eliminate al-Qaida’s capacity to deal with more attacks on the United States from that territory,” he added. “We accomplished both of those objectives — period.”

Biden had attempted to attach himself to the May 2011 raid in which Navy SEALs shot and killed bin Laden. But he couldn’t articulate it without a brain malfunction. What is wrong with this guy?

Obviously, for those of us who have paid attention to Biden, we know he opposed the raid on bin Laden’s compound in Abbottabad, Pakistan. He said so much in 2012 when he bragged he told Obama not to go into Pakistan.

That was back when Biden’s brain didn’t fail him every minute or so.

Even Obama knew to listen to Biden with regard to matters that were anything close to consequential. Thus far, Biden has managed to be worse at running the country than Obama was — and that is saying a lot.