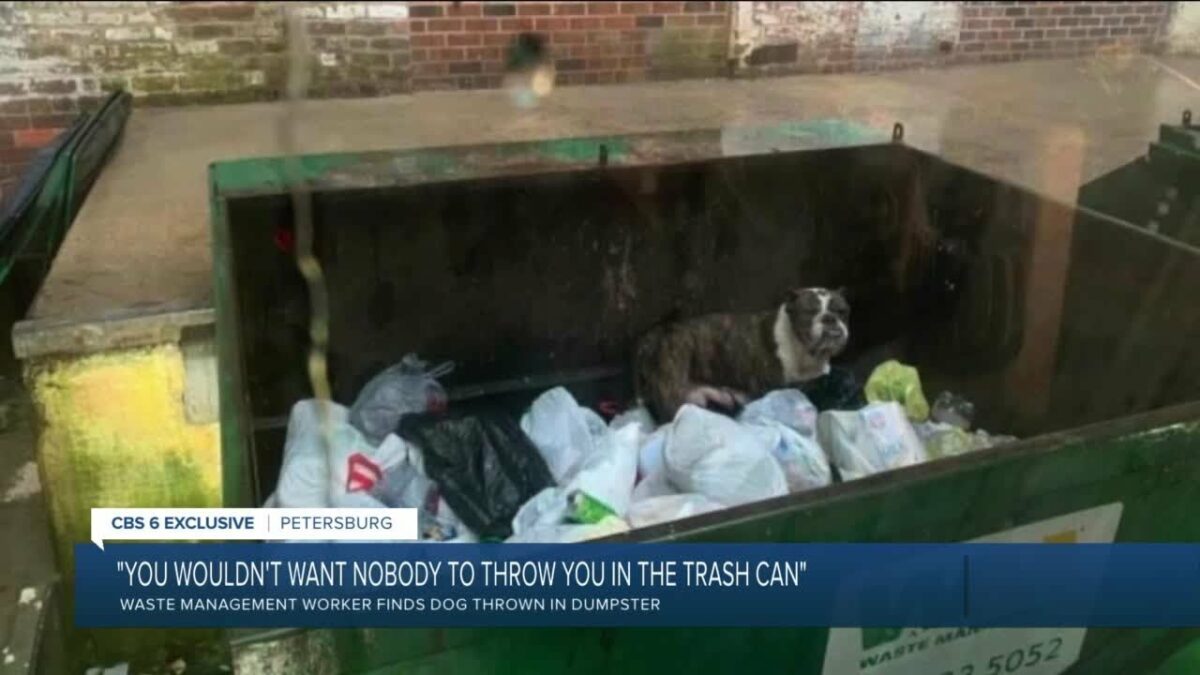 The following article, Worker Spots Dog Sitting in Dumpster, Saves Her Before She Is Crushed by Trash Truck Compactor, was first published on Flag And Cross.

On Friday morning in Petersburg, Virginia, Waste Management employee Jermaine Jackson was out making the rounds in his garbage truck.

He’s seen a lot of things in his 26 years on the job, but that rainy Friday morning presented a new scenario when he got to the dumpsters on Old Street.

Following his normal routine, he loaded the dumpster and was about to empty it when movement caught his eye. A brindle and white bulldog-looking pup poked her head up from the trash.

“As I pull up to the can, I went to, to dump it, a dog popped out,” Jackson later recalled to WTVR-TV.

He noticed just in time — a few more moments, and she could have been killed.

“It, it’s kind of sad because she’s sitting there, you know, with a sad face, you know, like get me out of here,” Jackson continued. “[I]f I didn’t see her, she would be in the back of the truck right now or she, she could have got crushed.

“So I put the can down to make sure she was nice, you know, I called her. Her tail started wagging.

“She just, just got a great attitude, you know, no problems, you know, she just smiled when I lifted her up like, ‘Thank you, thank you for getting me out of here.'”

Unable to take her himself, and needing to continue with his work, Jackson did what he could: He tried to call animal control (they weren’t open yet) and made the dog a makeshift shelter out of dumpster covers so she could get out of the rain.

Some time later, the dog ended up at the house of Frances Verschuure, who was able to provide safety, food and shelter until animal control could come pick the dog up.

“So in the meantime, we just sat out here with her. She was sweet as she could be.”

When the animal control officers saw her, they realized something that made the dog’s story even more tragic.

“They did say that she is full of milk and so she would have recently had puppies,” Verschuure explained. “We were glad to get her to another home. Animal control was as just as gentle and kind as they could be, and I hope she finds a good home!”

The status and location of the dog’s puppies is unknown, though some have posited that they must have died or been kept by a negligent owner who just wanted to sell them off.

While it’s certainly possible that the dog got loose and was able to walk up a set of stairs and jump into the dumpster in search of food — especially if she had puppies somewhere to tend to — Jackson is certain someone placed her in the bin on purpose.

“I think somebody threw her in there … because where the dock at, she’s too short to jump on that dock,” he said.

Hopefully now that she’s with the animal control, the dog will get some serious rest and recovery and find her way to a safer living arrangement and happier future — all possible thanks to Jackson’s awareness.

Continue reading: Worker Spots Dog Sitting in Dumpster, Saves Her Before She Is Crushed by Trash Truck Compactor ...