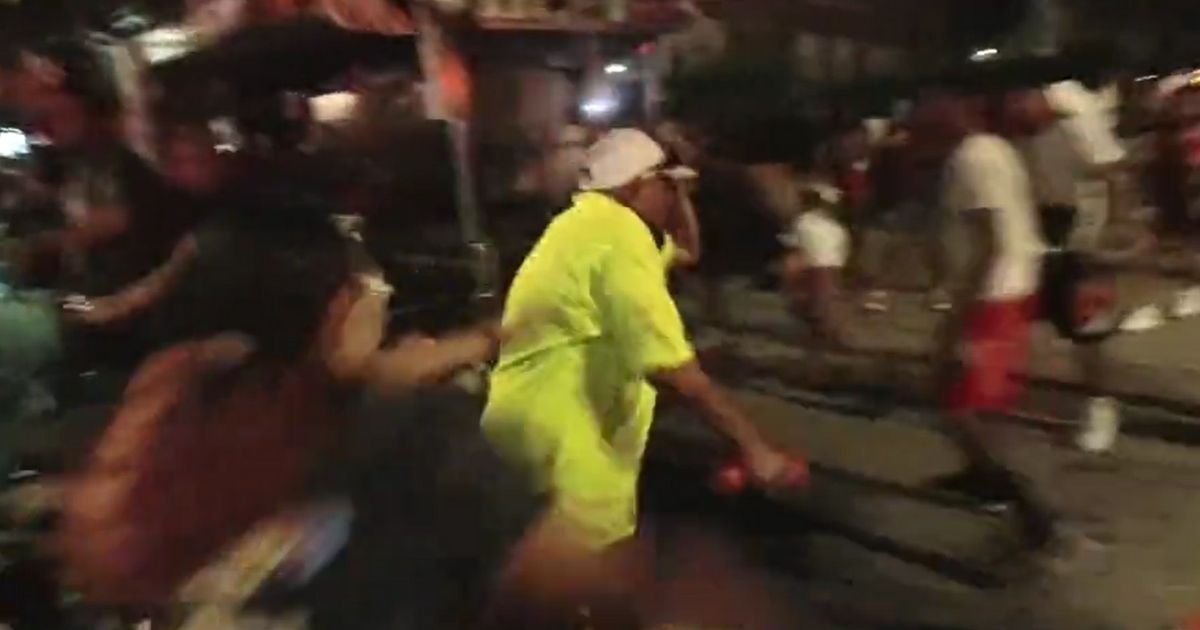 The following article, Proud Immigrant Refuses to Swap US Flag for LGBT One, So Woke Thugs Throw Hot Sauce in His Eyes, was first published on Flag And Cross.

A group of unpatriotic thugs pummeled a 65-year-old New York City street vendor and threw hot sauce in his eyes after he refused to replace an American flag on a food cart with an LGBT flag.

The shocking events unfolded during the city’s Gay Pride Parade on June 27.

Nader Hassaneen, an Egyptian immigrant, told the New York Post he thought he was going to “bleed to death” after being assaulted by an LGBT mob outside Washington Square Park.

Hassaneen, who retired as a street vendor because of a heart condition but was helping a son’s friend with his food cart, said a woman tore the U.S. flag off the cart and demanded he replace it with a Pride flag.

When he refused, Hassaneen said, an angry mob surrounded him, punched him and threw hot sauce in his eyes.

“My eyes were burning,” he said in Arabic, as his daughter translated. “A lot of people were hurting me and pushing me around. They punched in the back of the head.”

Hassaneen suffered multiple injuries and was covered in blood after being repeatedly punched by the unruly crowd.

“I have a broken nose. They say I might need surgery,” he told the Post. “When I saw the blood in my cap and I was bleeding from my nose, I thought I was going to bleed to death.”

The park, which is located in trendy Greenwich Village, has recently made headlines after residents complained that the iconic plaza has devolved into a squalid, crime-infested drug den, thanks to police pullbacks fueled by the left’s “defund the police” movement.

Under the soft-on-crime “leadership” of New York’s Democratic mayor and local politicians, drug addicts are openly doing cocaine, crack and heroin all around the 9.75-acre park.

The attendees of the gay pride event in Manhattan yesterday left the public trashed. Video by @elaadeliahu: pic.twitter.com/2pSiLzFo1m

Hassaneen said police came to his rescue when he was being assaulted by LGBT thugs.

“I felt safe because the cops were around,” he told the Post. “There were about 30 or 40 cops near the arch, but I was scared when they came at me. There were a lot of people coming at me at the same time.”

According to the police, the melee erupted due to an argument over food prices, but a person who filmed the attack claimed — without evidence — that one of the cart workers had uttered a homophobic slur.

Rioters at a NYC Pride event assaulted a food cart operator. He (in the neon green shirt) was left bloodied on the ground. pic.twitter.com/MdfAnRW8BT

Hassaneen denied the allegation, saying food cart operators know when the Gay Pride parade is every year and specifically operate their carts along its path.

If they hated gays, he said, they wouldn’t park their food carts there.

“I would never do that. I don’t have a problem with them,” Hassaneen said. “I know it was their parade. It was their day. They came out to have fun and enjoy themselves.”

For the sake of argument, even if someone had uttered an anti-gay slur, that does not justify a vicious mob beatdown of a senior citizen.

Abdelalim Abdelbaky, who owns the food cart, said he and his employees previously had been attacked at Washington Square Park amid the recent horrifying crime wave engulfing the city.

“Most of the people in the park are good, but you have some bad ones and they are giving the park a bad name,” Abdelbaky told the Post. “I don’t take my kids to the park, I don’t want them to see something bad.”

First, it is now indisputable that the left’s “defund the police” frenzy has been an abject failure in its inability to curb crime or maintain public safety.

Second, it’s hypocritically ironic that LGBT activists — who demand tolerance from everyone else — were so hateful and intolerant toward a patriotic legal immigrant.

If he had been an illegal alien who snuck across the border, maybe the left-wing mob would’ve welcomed him with open arms.

Third, this is yet another instance of leftists attacking America and the U.S. flag while enjoying the freedoms and privileges the flag confers on them.

It’s really hard to win at soccer when you expend so much emotional energy virtue signaling. It makes it really hard to root for these ladies. pic.twitter.com/HGTJbQffO3

New York and other liberal cities are imploding due to Democrats’ destructive policies.

You’d think local politicians would want to help their constituents as thanks for their longstanding party loyalty. Instead, Democrats have allowed their supporters’ hometowns to devolve into crime-infested killing fields.

Continue reading: Proud Immigrant Refuses to Swap US Flag for LGBT One, So Woke Thugs Throw Hot Sauce in His Eyes ...