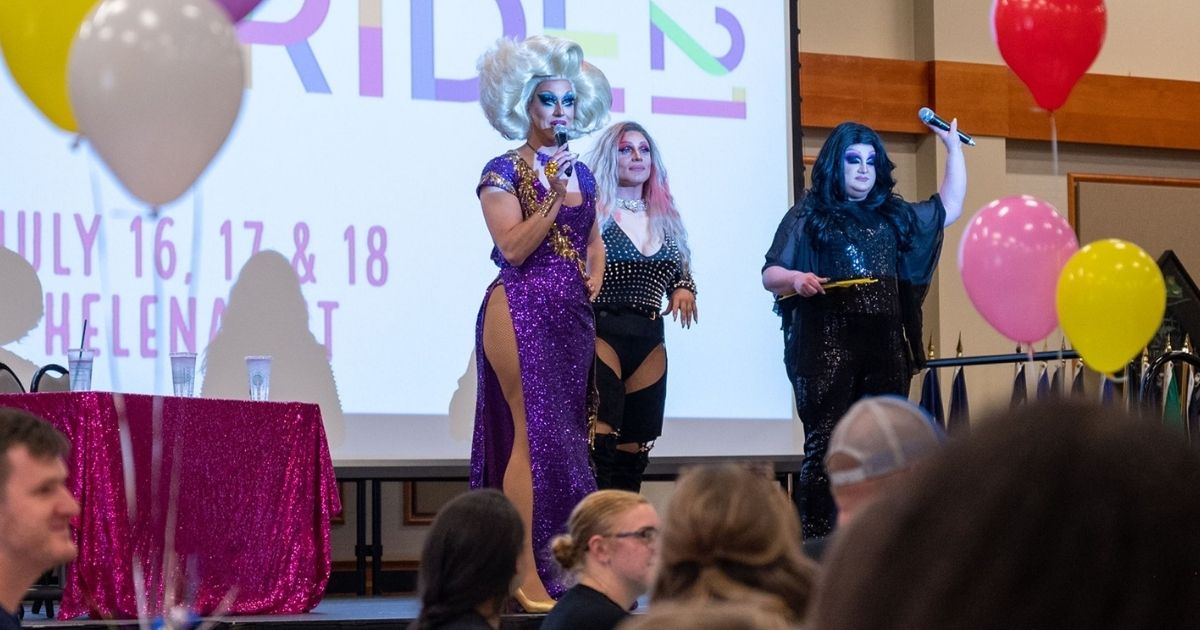 It’s rather pitiful: Malmstrom Air Force Base can’t even say they were the first Air Force base to hold a drag show for LGBT Pride Month. However, they can say they combined the show with drag storytime for the kids — another putative first for President Joe Biden’s new woke military.

According to a post on the official Facebook page of Malmstrom AFB, located outside of Great Falls, Montana, the event was held to “wrap up Pride Month.” To celebrate the last day that our major corporations had rainbow-hued logos on their social media accounts, the base threw a shindig at the library and The Grizzly Bend, a club and community center at the base.

Pictures from the event featured in a July 1 post include a shot of a child holding a “Love Knows No Gender” sign and the drag performers at the event.

The drag trio was “The Mister Sisters,” described on their Facebook page as “Great Falls’ Premier … well … only Theatrical Drag Troupe.” At least they own it.

“Malmstrom Air Force base made history yesterday when they formally acknowledged Pride Month and hosted a few events to celebrate the occasion on base,” The Mister Sisters wrote on their Facebook page.

“We are honored and humbled to have been asked to provide a Drag Queen Story Hour as well as host a trivia event. Thanks to their amazing team of volunteers on the Pride Committee, we couldn’t have asked for a better time.

“Cheers to new strides, setting the tone for future celebrations, and most of all, HAPPY PRIDE!” they added, with the last two words surrounded by rainbow and transgender flags.

As previously mentioned, though, this isn’t that historic — because Nellis Air Force Base in Nevada did it earlier in Pride Month.

At the June 17 “Drag-U-Nellis: Class is in Session” event, according to an advertisement circulated on social media, special appearances were made by by “RuPaul’s Drag Race” contestants Coco Montrese (2010 Miss Gay America) and Alexis Mateo, as well as 2018 Miss Gay Missouri first alternate MaKena Knight.

I guess the airmen at @NellisAFB have completely mastered air and ground combat so they can relax with an event that has grown men in dresses twerking; very cool!

“So @NellisAFB is having a base-sanctioned drag Queen show; isn’t that awesome?” tweeted veteran and podcaster @BravoKiloActual on June 18. “Maybe some of our military ‘journalists’ can call them up and ask them about this.

“I guess the airmen at @NellisAFB have completely mastered air and ground combat so they can relax with an event that has grown men in dresses twerking; very cool!”

Breitbart called them up to inquire and got this emailed statement in return:

“Nellis Air Force Base and the 99th Air Base Wing hosted its first-ever drag show Thursday, June 17, at the Nellis Club. The event was sponsored by a private organization and provided an opportunity for attendees to learn more about the history and significance of drag performance art within the LGBT+ community,” Nellis officials said.

“Ensuring our ranks reflect and are inclusive of the American people is essential to the morale, cohesion, and readiness of the military. Nellis Air Force Base is committed to providing and championing an environment that is characterized by equal opportunity, diversity and inclusion.”

However, that event didn’t have a drag storytime beforehand, so I guess Malmstrom and The Mister Sisters have broken new ground for the LGBT community. Great job all around.

And what a drag queen storytime it appeared to be, as well. If you’ll notice from one of the pictures in The Mister Sisters’ post, the drag queen on the left has a dress with a slit up to his thigh with the entire leg showing. I don’t remember the local librarian dressing that provocatively when I was a kid sprawled on the floor during summer storytime, but maybe I wasn’t paying attention.

There are several issues here that can’t just be shrugged off, the most obvious one being the sexualized display being put on for children. Assuming pride is a positive emotion — pride cometh before the fall and all that jazz — there’s nothing to be proud about in having a drag queen dressed for story time as if it were a burlesque show.

And then there’s what our adversaries are thinking. Earlier in the year, conservative commentator Pardes Seleh noted the difference between a Russian army advertistment vs. a bad-viral U.S. Army ad featuring Cpl. Emma Malonelord about how her journey “begins in California with a little girl raised by two moms,” followed by scenes from an LGBT march and a lesbian wedding.