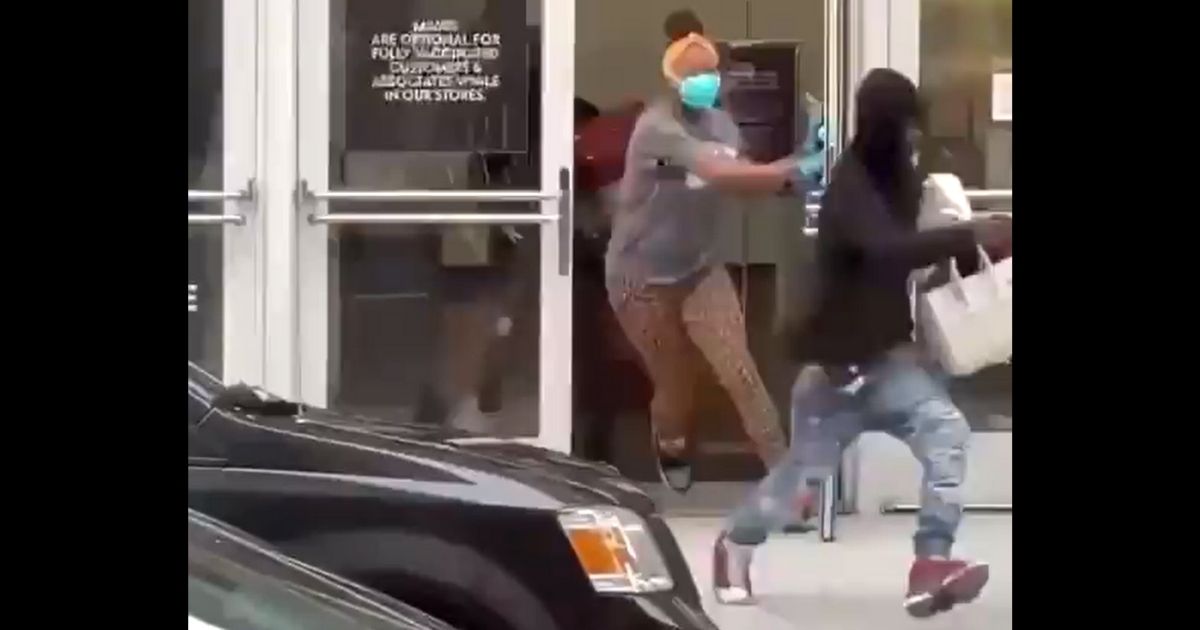 The following article, San Francisco Hit by Another Broad Daylight Shoplifter, This Time at a High-End Shop, was first published on Flag And Cross.

San Francisco police are investigating a brazen robbery at a Neiman Marcus store Monday evening where a group of handbag thieves got away in broad daylight.

The robbery happened around 5:49 p.m. at the high-end department store in Union Square, according to authorities, KTVU-TV reported.

Cellphone footage of the incident showed nearly a dozen shoplifters sprinting out of the store with arms full of handbags.

They made a quick getaway in cars that were waiting for them in the street.

By the time officers arrived on the scene, the suspects were gone.

Witnesses said the ordeal happened right before the store was set to close for the evening.

Suspects had allegedly smashed display cases and grabbed items from the racks before running out of the store.

Photos of the scene showed shattered glass display cases inside the store.

Witnesses counted at least nine people running out of the store with stolen items.

No arrests had been made as of Tuesday morning. Police were asking anyone with information to contact the San Francisco Police Department at 415-575-4444.

Neiman Marcus is not the only retailer in the area that has had to respond to an increase in shoplifting in San Francisco.

Target announced last week that its San Francisco stores will close at 6 p.m. instead of 10 p.m., citing an “alarming rise in theft” at its stores in the city.

“For more than a month, we’ve been experiencing a significant and alarming rise in theft and security incidents at our San Francisco stores, similar to reports from retailers in the area,” Target spokesman Brian Harper-Tibaldo told KRON-TV.

“With the safety of our guests, team members and communities as our top priority, we’ve temporarily reduced our operating hours in six San Francisco stores,” he added.

Shoplifting at San Francisco Walgreens stores is also four times above the average of Walgreens across the country, according to CNN. The retailer has had to spend 35 times more on security guards than in any other city.

In a November editorial, The Wall Street Journal said the city and state were experiencing the consequences of their actions.

“Progressives in California in recent years have strengthened property rights — to other people’s property,” it said. “Shoplifting has essentially been decriminalized, and retailers that apprehend thieves can be sued. The result: Another Walgreens store in San Francisco, the seventh this year, is closing after its shelves were cleared by looters.”

“In California, in short, trying to protect one’s property can be a criminal offense,” the editorial said. “Looters, on the other hand, typically go free thanks to a 2014 referendum that turned theft of property valued at less than $950 into a misdemeanor. Police stopped apprehending shoplifters because it wasn’t worth their time as thieves were released.”

Continue reading: San Francisco Hit by Another Broad Daylight Shoplifter, This Time at a High-End Shop ...