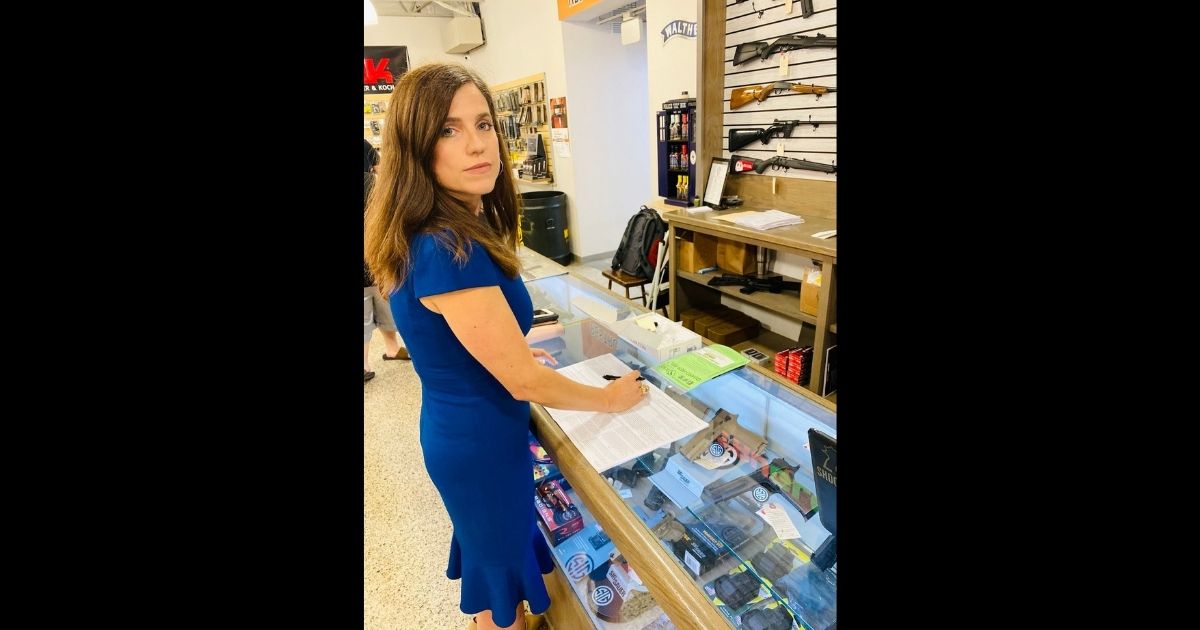 The following article, GOP Rep. Nancy Mace Says She Has Started Carrying After Her Home Was Targeted: 'I'm Not Going to Be Intimidated', was first published on Flag And Cross.

Mace’s house was vandalized over Memorial Day weekend. Since then, she goes about her business armed as police search for the culprit.

“When they show up to your house, and physically just, you know, try to destroy it with graffiti, it’s personal and it’s invasive and it’s violating, and it doesn’t feel good,” said Mace, according to Fox News.

“When this happened, it really changed everything for me. I’m not going to live in fear, and I’m not going to be intimidated,” said Mace. “I think it’s one of the most empowering things that you can do is to be able to defend yourself.”

She ensures that she is ready.

“I now go to the gun range almost weekly to practice shooting,” she said.

Mace warned anyone coming at her or her family in a June tweet.

“Buying another firearm. This one to carry,” she tweeted then.

Buying another firearm.
This one to carry. pic.twitter.com/6VUoEB58hr

“It doesn’t feel good that I feel like I have to look behind my shoulder every day. It doesn’t feel safe,” said Mace. “I carry a gun wherever I go today. Wherever I’m allowed to, I do carry.”

Mace was out of town when the phone rang early on Memorial Day. It was the police.

“They wanted to know if I was home, and if I knew my house had been vandalized,” said Mace.

We should all be able to feel safe in our own homes, regardless of our political beliefs.

I sincerely appreciate law enforcement doing all they can to find the criminal trespassers.

This is the 2nd time I’ve been targeted for vandalism in the last few months.

Anarchist symbols and profanity were spray-painted across her house.

The graffiti included, “f—k you Nancy,” and “all politicians are bastards.” It was scrubbed away by crews the day it happened.

Mace noted that in mid-June, police connected a symbol scrawled in a February act of vandalism with one left at her home.

Second, law enforcement has connected the vandalism at my home with vandalism that occurred at Bishop England High School on February 23, 2021. An analysis of the handwriting confirms this is the same individual(s).

Mace, who was the first woman to graduate from The Citadel, said she grew up around guns and knows how to defend herself.

She also fights back against social media claims she engineered the vandalism.

“There was no empathy, there was only let’s re-victimize her,” said Mace, summing up the tactics of the left.

“I challenge anybody, if I did this, please send the evidence to the FBI, and please charge me with a crime. I dare you to because the evidence just doesn’t exist out there. And it’s crazy to me that this is where we are in this country, you’re seeing the downfall of civility on social media because of this.”

Mace said her car was vandalized prior to her November election. She also said that the death threats she received in December led to her seeking a concealed weapons permit.

Continue reading: GOP Rep. Nancy Mace Says She Has Started Carrying After Her Home Was Targeted: 'I'm Not Going to Be Intimidated' ...

Great. Join the crowd of real Americans Ms Mace and welcome aboard.