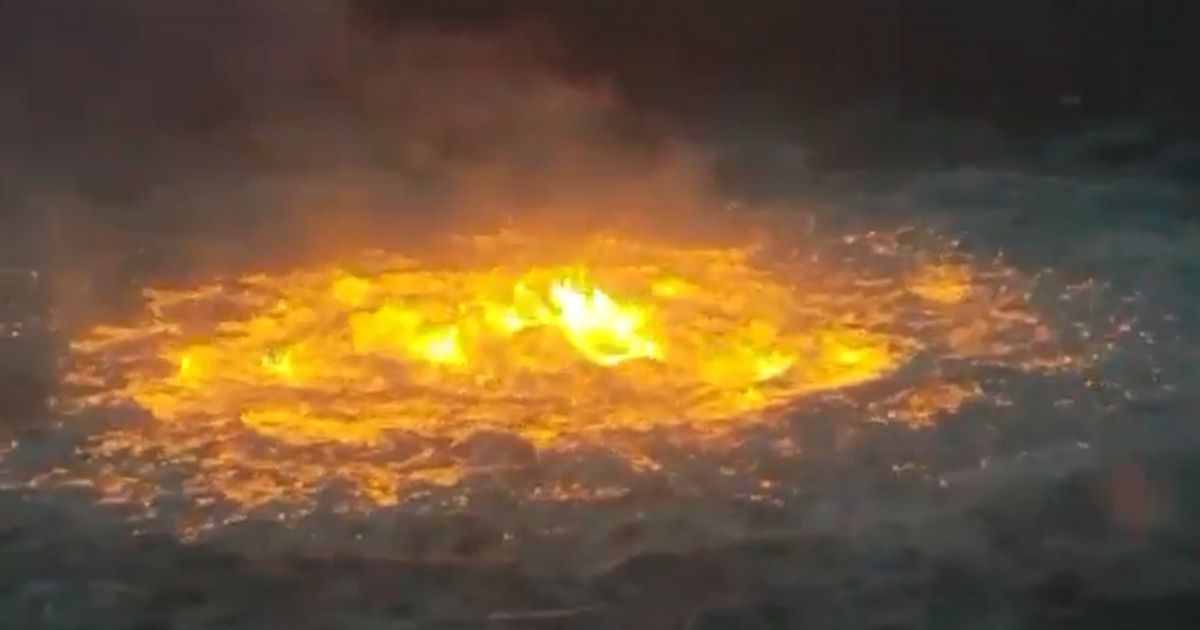 The following article, De Blasio Blames Pipeline Burst on Capitalism, Gets Reality Check When He Learns It's Owned by Gov't, was first published on Flag And Cross.

If a state-owned oil company’s pipeline ruptures in the middle of the Gulf of Mexico, what’s to blame? Capitalism, if you ask New York Mayor Bill de Blasio.

In proof that you should never tweet about something if you don’t understand the bedrock facts that underlie it, de Blasio blamed “corporate greed” for the so-called eye of fire created after a gas pipeline ruptured on Friday.

According to The Associated Press, the pipeline was owned and run by Petroleos Mexicanos, or Pemex, the state-owned petrocarbon monopoly in Mexico. The rupture happened in the offshore Ku-Maloob-Zaap field near dawn, roughly 150 yards from a drilling platform. The fire was extinguished without any injuries.

It did, however, lead to a video of the unearthly scene being passed around social media:

An underwater gas pipeline has caught fire in the Gulf of Mexico. It is connected to a platform operated by Mexican oil giant Pemex that was producing 726,000 barrels per day of oil equivalent at the moment of the incident. https://t.co/xLzQOkumWhpic.twitter.com/ieqCVhtD95

De Blasio either didn’t read or didn’t care about the Pemex part.

“It’s not a movie trailer,” de Blasio tweeted Saturday. “It’s not a natural disaster, either. It’s what happens when we let corporate greed destroy our planet.”

It’s not a movie trailer.

It’s not a natural disaster, either.

It’s what happens when we let corporate greed destroy our planet.

“In this case it is not corporate greed, Mr. Mayor. It is Government inefficiency, stubbornness and indolence to climate change,” Beltrán del Río noted. “Pemex is a State-owned company. But it is a disaster, alright.”

Other users noted de Blasio’s gaffe in misattributing this to “corporate greed.”

It’s not a movie trailer.

It’s not a natural disaster, either.

It’s what happens when we let politicians run an oil company. https://t.co/7aTCnafyzu

Mayor of NYC: How dare we not obstruct the corporate greed of

Maybe you should do a quick Google search before tweeting. https://t.co/dVOUPCWc9E

How dare you, @lopezobrador_. https://t.co/ZWv3eCxCYq

That last tweet referred to Andrés Manuel López Obrador — not a corporate greedster but the left-wing president of Mexico. As Andres Oppenheimer noted in a December opinion piece for the Miami Herald, López Obrador has “bet on his country’s state oil monopoly at a time when the world is increasingly embracing clean energies.”

Whether that’s a poor idea — Oppenheimer was arguing it was, given the push toward renewable energy by other governments — one can point to other state-run oil monopolies with a poor record of infrastructure upkeep.

Take Venezuela, which, under the socialist dictatorships of Hugo Chávez and Nicolás Maduro, believed the company was a golden goose for the comrades that need not be fed. Despite having the world’s largest oil reserves in 2019, according to NS Energy, it’s only 12th in yearly oil production — and not because John Kerry has been covertly advising the chavistas on switching over to solar panel production.

While American sanctions have played a role in the country’s poor oil production, a bigger issue is that neither Chávez nor Maduro felt the need to perform upkeep on PDVSA’s infrastructure. In addition, the company became an employment mill for the regime’s biggest supporters.

“With so little attention paid to the actual business of extracting oil, it is little wonder that PDVSA’s production has fallen from 3m barrels a day in 1999 to 2.4m today, according to OPEC. In the same period, its foreign debt has risen fivefold,” The Economist reported in 2012 after a major explosion caused by a gas leak at an oil refinery.

“Moreover, oil union leaders say PDVSA’s industrial-safety procedures have deteriorated sharply. The petroleum and mining ministry’s annual report shows that maintenance work is frequently postponed for lack of cash. Residents of the Amuay area have told reporters that the gas leak was apparent hours before the blast, though the government denies this.”

In February, Reuters reported that internal PDVSA documents indicate it estimated it would need $58 billion in funds to get its infrastructure in a place to produce as much as the company did in 1998.

And even though the sanctions are part of it, Reuters noted that “even state-owned companies from countries that are staunch Maduro allies, like Russia and China, are wary of boosting cooperation with PDVSA after years of corruption and operational inefficiency blurred projects’ lofty goals.”

If one were to go by these two examples, it’s almost as if unsafe oil infrastructure is inversely proportional to “corporate greed.”

One imagines Mayor de Blasio won’t, however — nor does one imagine he’ll learn any sort of lesson from this gaffe.

Continue reading: De Blasio Blames Pipeline Burst on Capitalism, Gets Reality Check When He Learns It's Owned by Gov't ...

De Blasio is the second dumbest man in politics, right next to Biden!

Agree, both are morons.