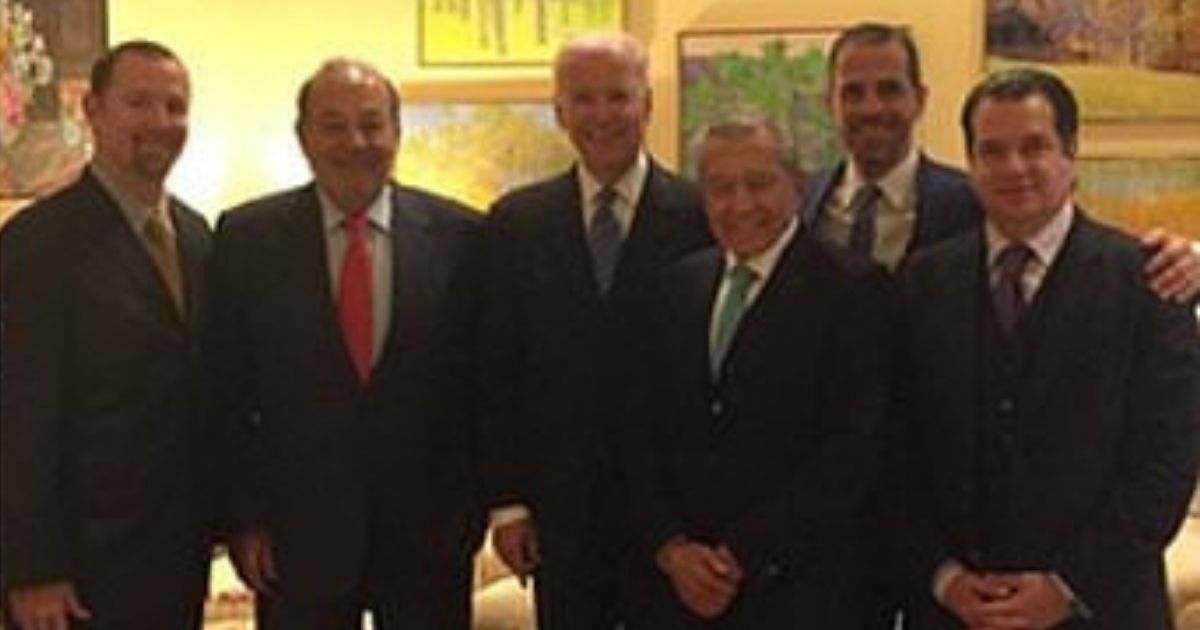 The following article, Biden Denied Talking Business with Son, But Picture Found on Hunter's Laptop Puts All the Ducks in a Row, was first published on Flag And Cross.

Did Joe Biden ever discuss international business with his son Hunter? The president maintained during the 2020 campaign that he didn’t. Now he has to explain why his son’s business associates were in the vice president’s official residence back in 2015.

In another unwanted surprise from Hunter Biden’s abandoned laptop, the Daily Mail published photos Wednesday of several Mexican billionaires with whom the president’s son was doing business at the time, including Carlos Slim and Miguel Alemán Velasco, at the Naval Observatory with Joe Biden during his time as vice president.

The photos came as Hunter Biden and his business partners were pursuing business deals in Mexico and Latin America. In February 2013, Hunter’s business partner Jeff Cooper wrote him to say, “This is setting up to be flippin gigantic brother.” The two were relying on their relationship with the powerful Alemán family for contacts.

According to Fox News, the photos were timestamped on Nov. 19, 2015, and coincided with the time given from an email also discovered on Hunter Biden’s hard drive: “Breakfast with Dad – NAVOBS.”

Slim was apparently in the country at the time; one of Hunter Biden’s colleagues at his firm Rosemont Seneca emailed him an article the following day with the headline, “SPOTTED: Carlos Slim in the lobby yesterday morning of the Georgetown Four Seasons.”

Biden and his associates were looking to develop energy deals in Mexico and beyond — particularly through Miguel Alemán Magnani, Miguel Alemán Velasco’s son and an heir to the Aléman fortune who they hoped could introduce them to Slim, the richest man in Latin America (and, at one time, the world).

All three were in the pictures at the Naval Observatory that day, so their hopes were answered, apparently.

That wasn’t all. In 2016, then-Vice President Biden flew to Mexico for trade talks with former Mexican President Enrique Peña Nieto. He apparently took his son and Cooper along with him on Air Force Two.

“We are arriving late tonight on Air Force 2 to MX City. We will be there for Thursday – I’m attending meeting w/ President N w/ Dad. Jeff is with me on lane and we will be with us all day,” Hunter Biden said in an email to Miguel Alemán Magnani, in which he chastised the heir for not doing enough for them.

“Would love to see but you never respond. I am really upset by it. You respond when it’s something you need. You are the most generous person I know but WTF,” Hunter Biden wrote.

“We have so many great things to do together and I want you at the plane when the … VP lands with your Mom and Dad and you completely ignore me. I’ve looked at what your family has done and want to follow in that tradition and you always say you will help but I haven’t heard from you since I got you a mtg for Carlos and your Dad.

“We have been talking about business deals and partnerships for 7 years,” he continued. “And I really appreciate you letting me stay at your resort villa…but I have brought every single person you have ever asked me to bring to the F’ing WHite House and the Vice President’s house and the inauguration and then you go completely silent – I don’t hear from you for months.”

The visit came a year after Aléman Magnani was unable to “smooth out” a visa issue to Mexico for Burisma owner Nikolai Zlochevskyi, the New York Post reported Wednesday.

The lack of a visa meant Zlochevskyi couldn’t finalize a deal with Mexican state-owned petroleum conglomerate Pemex. “Most likely jeopardizes my board position,” Hunter Biden emailed Cooper in February 2015.

“I am shocked Miguel didn’t come through at crunch time,” Cooper replied, adding, “they clearly value the relationship with your family AND they know they could sustain serious damage here by making enemies with you … Maybe a call from you or your dad to his dad? Maybe that shakes things loose. Whaddya think?”

And, if Hunter Biden’s emails are to be believed, this wasn’t the only time Aléman Velasco visited the White House.

In 2014, he emailed official White House photographer David Lienemann: “Do you have pictures from the lunch I had in dad’s office (I think on 2/26) with Miguel Alleman Sr. And Jr. And Jeff Cooper? If so let me know and I can send someone to pick them up.”

Now, assume you’re the vice president. Your son sets up a breakfast with Carlos Slim and Miguel Alemán Velasco. The former is ubiquitous enough that even I can pick him out from that lineup, even though I’ll profess that I’m not an expert on Mexican business.

Alemán Velasco is the head of Grupo Alemán and was the chairman of Mexican airline Interjet; Aléman Magnani was the CEO of the airline.

All of which is to say: There wasn’t a moment where Joe Biden thought to ask them, “So, how do you gentlemen know my son?”

I’ve brought people I knew from college to TGI Fridays with my family and that question has come out within the first five minutes; this is the vice president of the United States entertaining two of the richest men in Mexico in the Naval Observatory, his official residence as vice president. It wasn’t asked once?

“The White House told Fox News that the president maintains his earlier position that overseas business was never discussed,” the outlet reported. “A lawyer for Hunter did not immediately respond to an after-hours email from Fox News.”

But wait — Jeff Cooper thought a call from Joe Biden might get the Alémans to “smooth out” the visa issue for Zlochevskyi, which means he thought the vice president would be willing to call in the first place. That would mean the then-vice president would be aware of their business plans in Mexico and Latin America, of what Hunter Biden was doing on the board of Burisma, or both.

A year later, he’d take his son and Cooper on a trip to Mexico — for what, sightseeing? They wanted authentic churros? These questions were never asked or answered?

These explanations beggar belief. We have evidence Joe Biden has met numerous foreign business associates of his son, yet the president claims that not once were his son’s overseas business dealings discussed. Those must have been some pretty quiet meals.

If Joe Biden doesn’t want to talk about this, Hunter Biden’s laptop is going to keep on doing the job. Biden narrowly avoided its wrath in 2020. He can’t outrun his son’s accursed MacBook forever, though.

Continue reading: Biden Denied Talking Business with Son, But Picture Found on Hunter's Laptop Puts All the Ducks in a Row ...