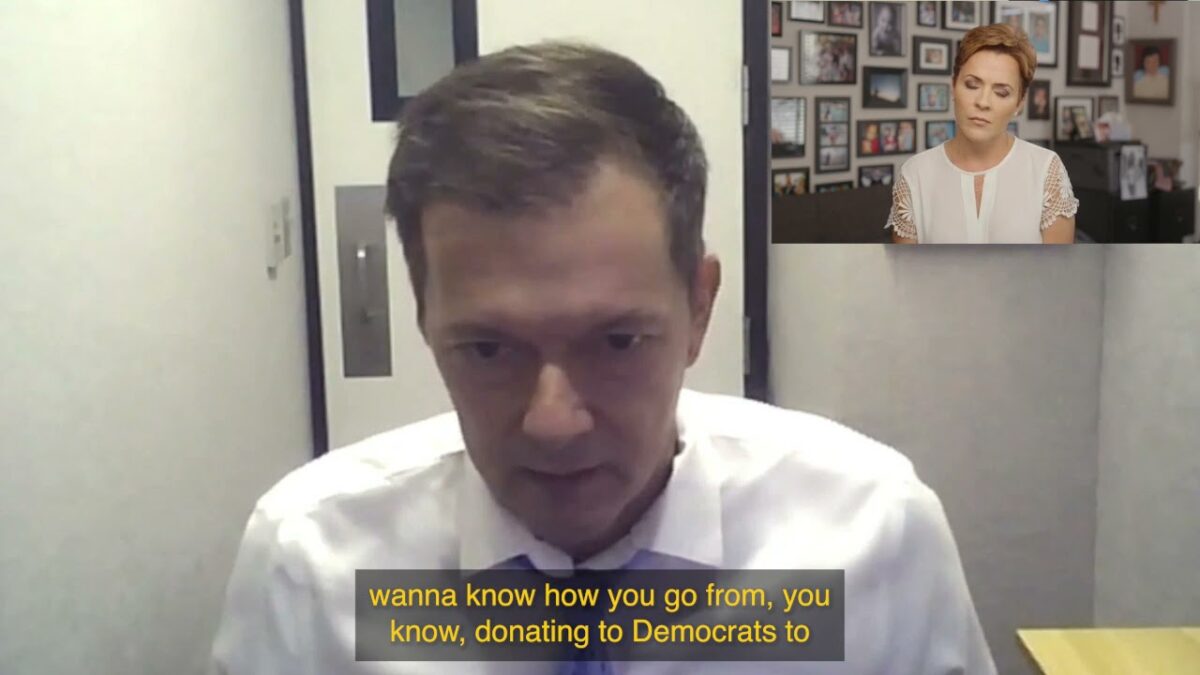 The following article, Watch Biased Reporter Literally Squirm When Kari Lake Exposes the Truth About Him to Entire World, was first published on Flag And Cross.

Republican Arizona gubernatorial candidate and former popular Phoenix TV news anchor Kari Lake was more than prepared to shred the questions of a biased, left-wing reporter during a recent interview.

Lake left her job at KSAZ-TV earlier this year after 22 years as anchor. She’d hosted Arizona’s most popular broadcast each evening for years, and probably knows Arizona’s media landscape better than anyone. In March, she walked away from her job and the false narratives, misleading stories, glaring omissions and pro-Democratic Party slant that has taken over media, even at the local level.

“Sadly, journalism has changed a lot since I first stepped into a newsroom, and I’ll be honest: I don’t like the direction it’s going,” Lake bravely said. “The media needs more balance in coverage and a wider ranger of viewpoints represented in every newsroom at every level and in each position.”

There was no way the Phoenix area’s left-wing reporters would forgive Lake for daring to share how swampy their industry is. Once Lake announced last month she was running for governor as a Republican, some of these dishonest people probably couldn’t wait to get a crack at her.

One of them did. Needless to say, when Lake sat down for an interview with biased, left-wing AZ Family late last month, she was prepared for them to go negative.

The outlet’s Dennis Welch attempted to corner her with leading questions regarding her past financial support for candidates, including to people such as 2004 Democratic presidential nominee John Kerry.

“Umm, so before we get started, we’re going to talk about the campaign contributions in the past and how you changed,” Welch said to open the interview. “I do want to double-check some facts here. I’ve got you contributing 500 bucks to John Kerry in 2004. Does that sound right?”

Lake answered that she had, but she had obviously sensed where the interview was headed. Welch spent an inordinate amount of time attempting to use veiled questions in order to portray Lake as not a genuine conservative — as if he were interested in getting to the bottom of her previous campaign donations for some reason other than to smear her.

She let him have it.

“My only point right now is to try to get the facts straight,” Welch said.

If true, Welch’s line of question might have been the first time in years a biased, left-wing reporter cared solely about “facts.”

“What I see is happening here is I’m running for Governor. And rather than doing a story of, ‘Hey, a person who has worked in our industry, had an illustrious career and is running for Governor because she cares about this state.” You’re going to do a hit piece or try to be derogatory, which is so typical of where the media goes. If there’s a story with a conservative in it, it always has a negative slant and people are onto it, Dennis. They’re onto it. And you know you guys do that.

“Okay. Well, I just want to know how you go from donating to Democrats, to running for the Governor, running as a Republican candidate for Governor,” he said — apparently knowing he was out of his league.

“You could never be a Democrat in your life and then become a Republican? If people haven’t opened their eyes in the last year, I don’t know how somebody wouldn’t open their eyes, especially in the last year, and become a conservative after what we’d been through,” Lake said. I grew up conservative. I had a short area where I was a mother. I had a one-year-old baby. I had a baby on the way.”

“I wasn’t for endless wars. We were a few years into Afghanistan, and it was looking like we weren’t going to get out. You know what? I was right. We were there for 20 years. Donald Trump is the one who tried to get us out of there,” she said. “I am probably the most conservative person in this race right now.”

Despite being AZ Family’s political editor, Welch apparently couldn’t conceive that people are capable of changing political parties. Perhaps the leftist positions of the modern Democratic Party are all normal and rational to him.

My grandfather was a die-hard Roosevelt Democrat who fought in World War II and died a Democrat in the mid-1990s. He wouldn’t be a Democrat if he were alive today — not after seeing what the left did to the party. Lake saw it. She also saw the bias, the deception and the lies in the media. She walked away from being a Democrat years ago, and from a job a person such as Welch could only dream of.

In any event, Lake spent the rest of the interview essentially shredding the biased, left-wing media and Welch.

The video is worth a watch in its entirety, if you have the time. Seldom do we get to see a media heavyweight stand up for what is right, and to use their talent, experience, bravery and political acumen to expose the pit which the modern establishment media is.