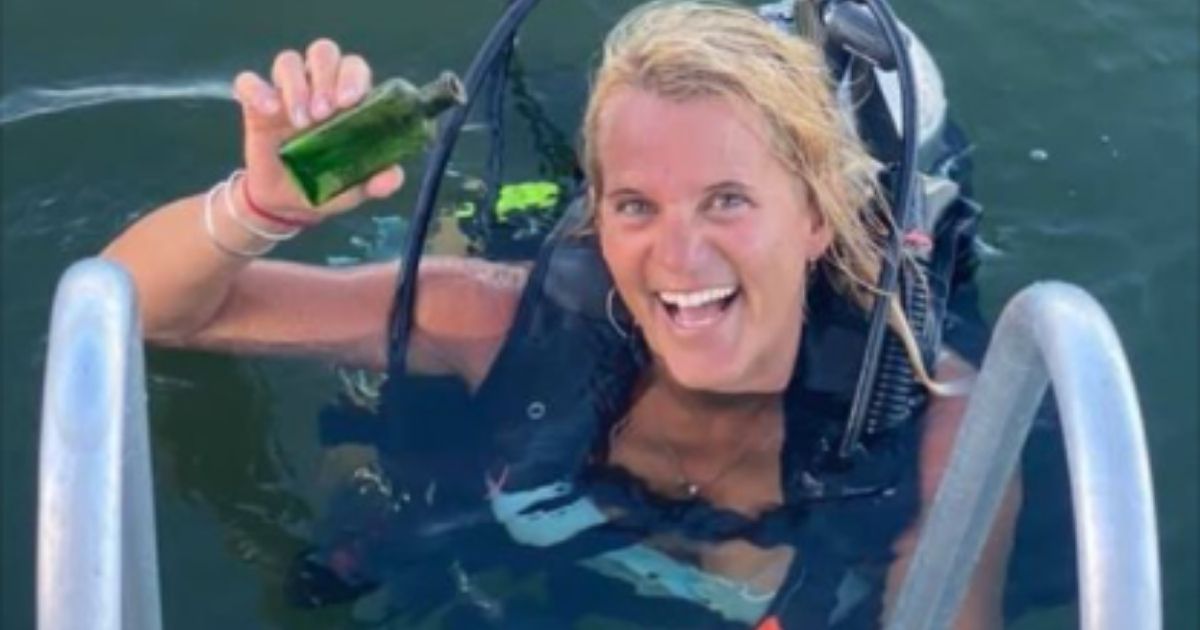 The following article, Diver Finds Unremarkable Green Bottle on River Bottom, Discovers a Message Inside from 1926, was first published on Flag And Cross.

In a world filled with chaos and bad news, a heartwarming Father’s Day tale emerged from Michigan’s waterways last month.

As such, she is no stranger to odd discoveries and secrets. She happily keeps a collection of bottles and other trinkets that she discovers while on her journeys.

However, something that caught her eye on June 18 probably rises to the top.

According to CNN, Dowker was scuba diving in the Cheboygan River –a necessary activity to clean her glass-bottom boat, the Yankee Sunshine — when she noticed an old-fashioned green bottle sitting at the bottom of the river.

“At first I thought it was just a cool bottle, and then when I picked it up, when I was still under the water, I could read the word ‘this’ in the paper,” Dowker told CNN. “It was kind of like, ‘Holy Smokes! We’ve got a message in a bottle here. Cool!'”

Upon reaching the surface, she showed the bottle to her first mate and a potential client. She told CNN the bottle was about two-thirds filled with water and still had its cork, though everything had deteriorated through the years.

Dowker was persistent and fished the note out of the bottle.

Dated 1926, the note read: “Will the person who finds this bottle return this paper to George Morrow Cheboygan, Michigan and tell where it was found?”

Cheboygan is a small town, and Dowker knew a few people who had the last name of “Morrow” in the area. Figuring that perhaps a family member might remember George, she posted a picture of the bottle on her company’s Facebook page.

“I figured we’d track it down pretty quickly and that’d be the end of it,” Dowker told CNN. “So I kind of forgot about it because it was already late that night … and went to bed.”

When she woke up in the morning, the post had been shared more than 100,000 times.

With thousands of people on the internet wanting to hear the end of the story, Dowker was overwhelmed.

“What was going through my mind was where am I even going to find the time to do the research to find the person,” Dowker said. “I’m a single mom running a small business with three teenage boys.”

But a resolution came soon.

Michele Primeau, George Morrow’s daughter, received a call from a stranger who had seen Dowker’s post. Upon seeing the photo, Primeau immediately recognized her father’s handwriting.

“I don’t do Facebook, and I’m just flabbergasted at how this has grown,” she told CNN.

Primeau explained that her father’s birthday was in November, and he would have been 17 or 18 years old when the note was written.

“I can just see him going out and doing that because it was his birthday,” Primeau said. “I don’t know for sure. But it just sounds like something he would have done.”

She elaborated that her dad was always sentimental, and she told CNN that her father had thrown a similar bottle into Lake Huron while his family was camping.

George Morrow passed away in 1995, but Primeau said the discovery brought back a lot of warmth and good memories — just in time for Father’s Day.

“So he’s been gone a long time, but it was kind of cool because all this happened on Father’s Day weekend,” she told CNN.

Dowker, to her credit, offered to give the bottle to Primeau, but the latter told Dowker to keep it, maintaining that “she found it and that would keep (George Morrow’s) name living on.”

As far as Dowker is concerned, Primeau has a free lifetime pass for Nautical North Family Adventures.