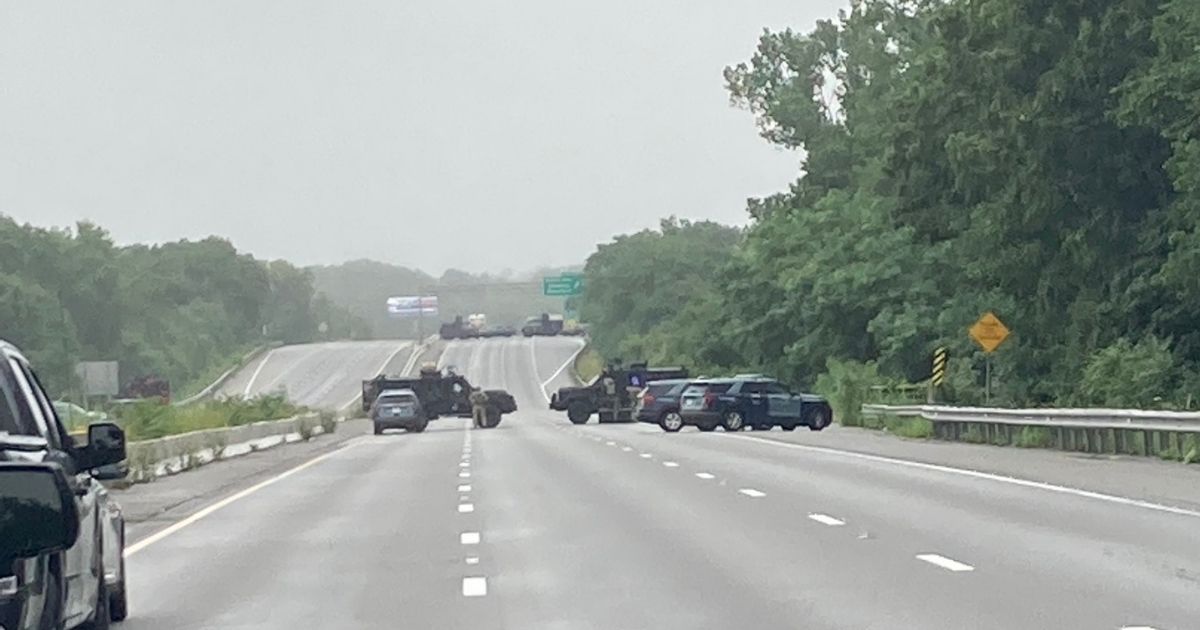 The following article, Armed Men Shut Down Interstate, Stand Off with Police Outside Boston, was first published on Flag And Cross.

Interstate 95 in Massachusetts was shut down Saturday morning during a standoff between state troopers and a group of armed men.

State Police said they have arrested 11 suspects, according to the Boston Globe.

State Police Col. Christopher Mason said the men told police they belonged to a group called Rise of the Moors, according to WBTS-TV.

Mason said that troopers established a “hard perimeter” around the men.

The scene, from a distance, looking northbound on Rt 95/128. https://t.co/WXEWjCvmdk pic.twitter.com/kkY3nHkJbt

“We are hopeful that we will be able to resolve this peacefully,” Mason said. “Time is our ally in this, and we will certainly use that.”

The incident began at about 1:30 a.m. Saturday when a state trooper encountered a group of armed men who were parked in the I-95 northbound breakdown lane while they refueled their vehicles, Mason said.

The men were dressed in tactical gear and said they were en route Rhode Island to Maine for “training.”

“Some had sidearms, pistols. Some had a combination of both” rifles and pistols, Mason said.

The trooper asked for their drivers’ licenses and gun permits, and was told the men did not have them.

The men claimed their group “does not recognize our laws,” police said, according to The Guardian. “The men refused to put down their weapons or comply with authorities’ orders.”

After more troopers and local police were summoned, negotiations began.

“Our negotiators are in contact with the individuals and the self-professed leader wants it very much known that their ideology is not anti-government,” Mason said, according to the Boston Globe.

“I think the investigation that follows from this interaction will provide us more insight into their motivation, what their ideology is.”

Mason said the initial trooper’s interaction was “very patient, very understanding with them, very adept at de-escalation. And so I’m confident that that mindset and methodology will permeate the entire negotiation that we have with these individuals, and we’ll be able to successfully resolve this. And we look forward to doing that,” he said.

A man who called himself Jamhal Talib Abdullah Bey streamed a video on YouTube from the Ride of the Moors account, emphasizing that the group was not anti-government.

“We are on interstate 95 in Massachusetts…The police seen us on the side of the road with our guns secured. We were afraid so we got out.”

A man who identifies himself as Jamhal Talib Abdullah Bey is also on YouTube streaming this on the Rise of the Moors account. @wbz pic.twitter.com/PfaqzUTjxR

While the negotiations continued, residents were told to shelter in place and I-95 was closed in that area.

According to the Boston Globe, the shelter-in-place alerts have been lifted.

Continue reading: Armed Men Shut Down Interstate, Stand Off with Police Outside Boston ...

The armed men did not shut down the road. It was not an Ashli Babbitt scenario, although she also had two arms and Democrats considered her well armed.