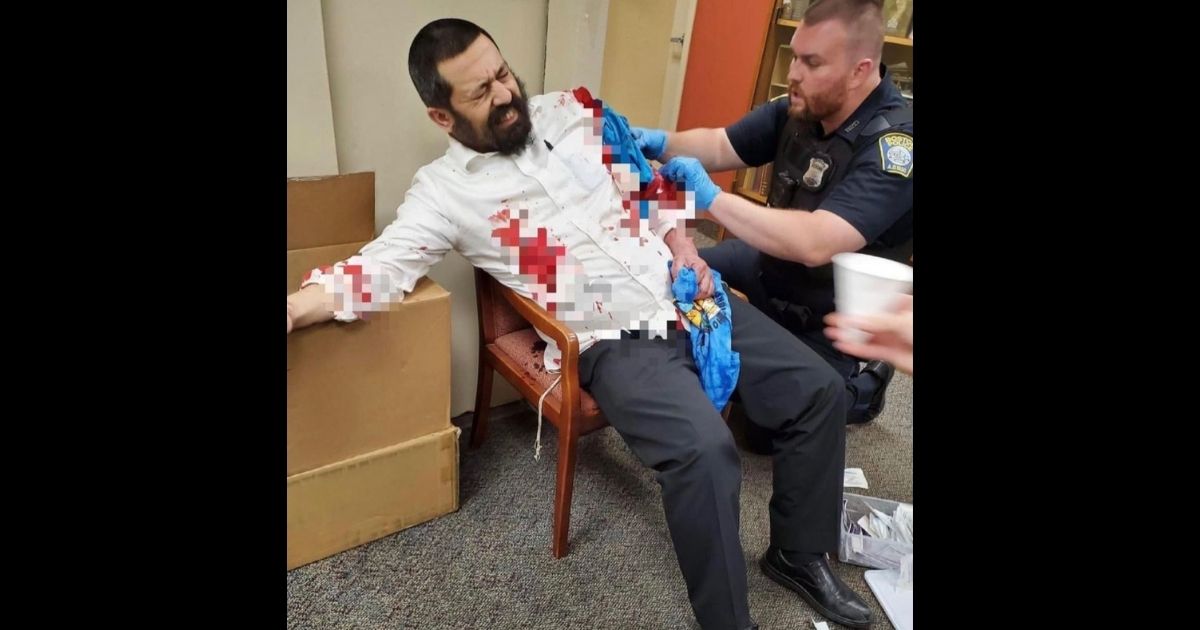 The following article, Khaled Awad Arrested in Brutal Stabbing of Boston Rabbi Outside of School, was first published on Flag And Cross.

Boston police have identified a suspect in the brutal stabbing of a rabbi outside of a Massachusetts school Thursday afternoon.

The suspect, identified as Khaled Awad, was arrested on Chestnut Hill Avenue shortly after the stabbing outside the Shaloh House school, WCVB-TV reported.

Rabbi Shlomo Noginski was stabbed eight times in the Brighton Common park near Shaloh House, according to Rabbi Dan Rodkin, the executive director of the school.

Awad allegedly approached the rabbi while he was sitting on the steps of the school and talking on the phone.

The suspect pointed his gun at the rabbi and demanded Noginski to hand him his car keys and get in the car, according to Rodkin.

Nowinski ran to the park across the street where Awad allegedly followed him and stabbed him.

BREAKING: A Jewish Rabbi, Shlomo Noginski, was repeatedly stabbed outside of the Shaloh House Jewish Day School in Brighton today.

Antisemitism is alive. We have to end it! pic.twitter.com/bLSBcxmoMa

There was a Shaloh House summer camp program in session during the attack and the facility went into lockdown once staff became aware of the situation.

“At no point during the incident were any of the children in danger,” a note to the schoolchildren’s parents read.

“An attack on one member of our community is an attack on us all,” she tweeted.

“There is no place for antisemitism or racism in Massachusetts, and no one should live in fear of violence.”

My heart is with Rabbi Noginski and the Shaloh House as we pray for his speedy recovery.

An attack on one member of our community is an attack on us all. There is no place for antisemitism or racism in Massachusetts, and no one should live in fear of violence.

Nowinski is recovering from the attack in a Boston area hospital and is in stable condition, according to WCVB.

Investigators have not yet identified a motive for the stabbing.

“This afternoon’s horrific stabbing of a rabbi outside of Shaloh House, a sacred house of worship and Jewish Day School in Brighton, MA, has sent a shockwave of fear and anxiety throughout the community,” ADL New England Regional Director Robert Trestan said in a statement.

Today’s attack on a rabbi in #BrightonMA has sent a shockwave of fear & anxiety throughout the community. As this investigation unfolds, we call for full transparency so that the community gets answers as to why a rabbi was stabbed outside of his house of worship. pic.twitter.com/w6NwxKpuqV

“As this investigation unfolds, we call for full transparency so that the community gets answers as to why a Jewish rabbi was stabbed outside his house of worship.”