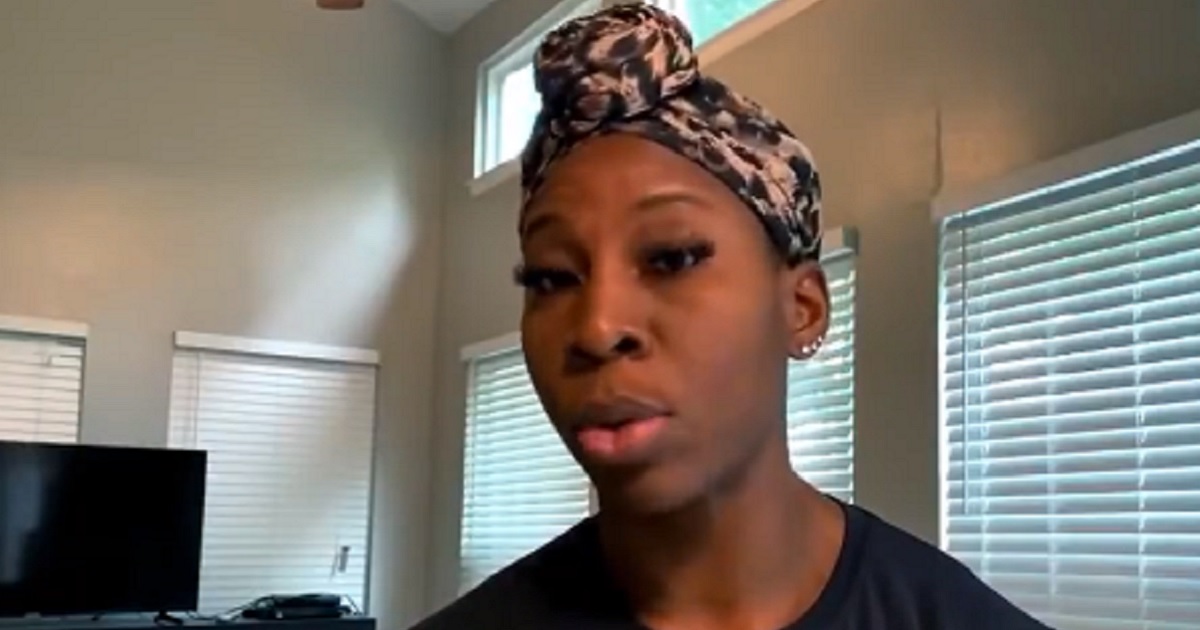 The following article, Olympian Who Turned Back on National Anthem Claims It Celebrates Slaves' Blood, was first published on Flag And Cross.

Gwen Berry, the most famous third-place hammer-thrower in American Olympic trials history, keeps coming up with reasons she doesn’t like the national anthem.

First, it was a conspiracy against her. USA Track and Field waited until she was on the podium to play it because they wanted to humiliate her.

“It was real disrespectful,” she said. “I see what’s up.”

She sees what’s up, everyone. That’s why she turned her back while it was playing and covered her head with a T-shirt that said “Activist Athlete.”

But why would it be so problematic? Well, have you heard the third verse? That’s where it celebrates the blood of slaves, obviously.

In an interview with Black News Channel on Tuesday, Berry cited the controversial stanza — unknown to most living Americans — as one of the reasons she protested the anthem during the Olympic trials in Eugene, Oregon, on Saturday.

“If you know your history, you know the full song of the national anthem, the third paragraph speaks to slaves in America, our blood being slain and … all over the floor,” Berry told BNC.

“It’s disrespectful and it does not speak for black Americans. It’s obvious. There’s no, there’s no question.”

Olympian @MzBerryThrows: “If you know your history, you know the full song of the National Anthem. The third paragraph speaks to slaves in America, our blood being slang and piltered all over the floor. It’s disrespectful and it doesn’t speak for black Americans. It’s obvious” pic.twitter.com/NF0cV7YDgr

Don’t get her wrong, though: She still wants to represent the United States, just not, you know, that whole anthem thing or whatever.

“I never said I didn’t want to go to the Olympic Games,” Berry said. “That’s why I competed and got third and made the team.”

“I never said that I hated the country. Never said that. All I said was. I respect my people enough to not stand or acknowledge something that disrespects them. I love my people. Point blank, period.”

Berry on why she signed up for Team USA: “I never said I didn’t want to go to the Olympic Games … all I said was, I respect my people enough to not stand or acknolwedge something that disrespects them.”

That’ll make for some inspiring quotes for the kiddies if Berry ever makes the front of a Wheaties box: “I never said that I hated the country.”

That’s our new bar for patriotism — don’t actively say you loathe the country you’re representing. You don’t need to say you don’t loathe the country, just make it clear you didn’t say you loathed it — and you want to go to the Olympics, so you guess you’re going to have to tolerate the U.S-of-A for a few more weeks before you go full Kaepernick.

As for the the “third paragraph” of the national anthem speaking “to slaves in America, our blood being slain and … all over the floor,” she’s talking about the second half of the third verse:

No refuge could save the hireling and slave
From the terror of flight or the gloom of the grave,
And the star-spangled banner in triumph doth wave
O’er the land of the free and the home of the brave.

This verse is specific to the War of 1812 and, by the time “The Star-Spangled Banner” became the official national anthem in 1931, few knew its true meaning — which is in dispute until this day. (It’s worth noting that’s mostly irrelevant, too; as Britannica.com notes, “The third stanza is customarily omitted out of courtesy to the British.”)

Historical context is key, too. Mark Clague, a University of Michigan musicologist and founding board chairman of the Star Spangled Music Foundation, told The New York Times in 2016 that the verse was a reference to the conduct of the British forces during the war.

“The social context of the song comes from the age of slavery, but the song itself isn’t about slavery, and it doesn’t treat whites differently from blacks,” Clague said.

“The reference to slaves is about the use, and in some sense the manipulation, of black Americans to fight for the British, with the promise of freedom. The American forces included African-Americans as well as whites. The term ‘freemen,’ whose heroism is celebrated in the fourth stanza, would have encompassed both,” Clague said.

So a verse that doesn’t mean what Gwen Berry claims it does — the song isn’t about slavery, as Clague notes (and the “all over the floor” part she apparently made up all her own) — is almost never sung and isn’t even known to most Americans is partially to blame for the Olympian’s animus toward the anthem.

Unfortunately, when she gets to Tokyo, the International Olympic Committee has made it clear it won’t allow protests during medal ceremonies — although the IOC is considering a compromise to allow limited political expression.

“I feel like that’s not enough,” Berry told The Washington Post. “It’s our sacrifice. It’s our podium. It’s our moment. So we should be able to protest whatever we want. It’s not for them to decide.”

“When I get there,” Berry said, with a smile, the newspaper reported. “I’ll figure out something to do.”

There’s nothing that says Olympic spirit quite like someone who doesn’t seem particularly interested in representing anything except herself. Her sacrifice, her podium, her moment, her decision.

Unfortunately, Gwen Berry isn’t a nation-state and she can’t make it to Tokyo without the United States Olympic Committee.

She may indeed “figure out something to do” once she’s at the XXXII Games, but don’t expect the IOC to be as indulgent as the USOC or American media.