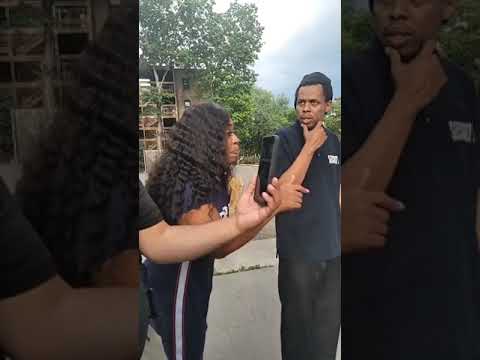 The following article, Mob Surrounds Transgender Minneapolis City Council Member's Car: ‘We Are Not Asking No More’, was first published on Flag And Cross.

Headlines are illuminating things. Take this week, when activists livestreamed themselves mobbing the car of Minneapolis City Council Vice President Andrea Jenkins and refusing to let him go until he signed a set of demands.

Jenkins — a man who identifies as a woman — didn’t just say he was held captive or claim he was held hostage. That’s literally what the mob streamed itself doing.

Sure, the leader of the rabblement, Donald Hooker Jr., may have told WCCO he was just “having a conversation” with Jenkins. That doesn’t mean the media needs to indulge Hooker’s delusions.

Someone who goes to the bank and slips the teller a note saying, “Give me all your money or I blow this place to kingdom come” shouldn’t have the luxury of the media explaining that he was “negotiating the terms of a loan.”

According to conservative outlet Alpha News, the incident happened Sunday after a Pride march. Jenkins was heading back to his car when Hooker confronted him.

Jenkins’ ward is home to George Floyd Square, the “autonomous” (read: lawless) zone set up at the intersection where George Floyd died. Hooker said he told Jenkins he needed to “leave it alone.”

“She blew up at me in my face. … And then she stormed off to this car. So we’ve been out here for about an hour and a half. And she has been mean. She’s been rude,” Hooker said in the livestreamed video.

“She helps support the cops who kill black people and black trans women,” Hooker said. “I told her if you’re not gonna do anything, we’re gonna have a peaceful protest outside your house. You know what she said to me? … She said she was gonna call the motherf***ing cops on us for a peaceful f***ing protest.”

They had six handwritten demands for Jenkins, including getting all charges dropped against “all 646 protesters and other protesters from 2020,” leaving George Floyd Square alone and calling for Democratic Mayor Jacob Frey’s resignation. Hooker read the demands through a megaphone to cheers.

At one point, Jenkins agreed to ask Frey to resign — and then the mob told him to repeat it.

“I said it three times,” Jenkins said. “This is ridiculous.”

“Bring me some Chipotle because I’m sitting here all f***ing night,” Jenkins said. “I’m not signing s***. I am not signing nothing.”

When a woman in the driver’s seat of Jenkins’ car spoke up, the reaction was immediate.

“We are not asking no more, white lady. We demanding at this point,” someone yelled. “We aren’t asking, we’re done asking. F***ing s***. We’re demanding it now. So why don’t you just sit back in your little seat and do your job and drive.”

In a statement, Jenkins said that “Black pain, Black trauma, Black anger is real and justified. What is not justified is the inhumane treatment of other humans because they hold elective office.”

“I have always believed in open dialogue where people can talk and be respectful of their differences. I continue to be willing to sit down with activists, advocates and protesters to understand their policy change demands and recommendations,” he said, according to KARE.

“I refused however to be bullied and held hostage to somehow accomplish that. Every citizen of this City has a right to bring forward their concerns, but no citizen has the right to detain and coerce anyone to do anything, that includes elected officials.”

“I don’t care what your politics are — Democrat, Republican, independent. Everyone should be speaking out against this,” Frey added. “You should not hold people against their will and compel them to take your position under duress. That’s fundamentally wrong. It’s anti-democratic.”

Holding elected officials accountable is good. Holding people for hours against their will until they’re compelled under duress to take positions is not.
This isn’t a matter of politics or policy. We should all call this behavior out for what it is: fundamentally wrong. https://t.co/rFNj0g5LZi

Hooker, of course, doesn’t think he did anything wrong.

“We were having a conversation. I was trying to keep her accountable, and I said, ‘Well, we’ll just have to show up and do a protest at your house, a friendly protest,’ and then that’s when she blew up in my face,” he told WCCO.

“I do believe that she knows what the people want, and she understands … what the power of the people looks like.”

No, what Jenkins understands is what the power of the mob looks like. What the crowd around Jenkins’ car made clear was the threat of overwhelming force.

The same goes for “protests” at a politician’s home. The message in both cases is clear: We know who you are and we know where you live.

Few cities in America have done as much over the past year to empower the mob as Minneapolis has. Just look at those headlines. Jenkins was only “claiming” to have been held hostage and only “says” he was held captive — when video from the mob itself shows that’s exactly what happened.

This is where appeasement of the mob leads, and the media won’t even call it what it is.