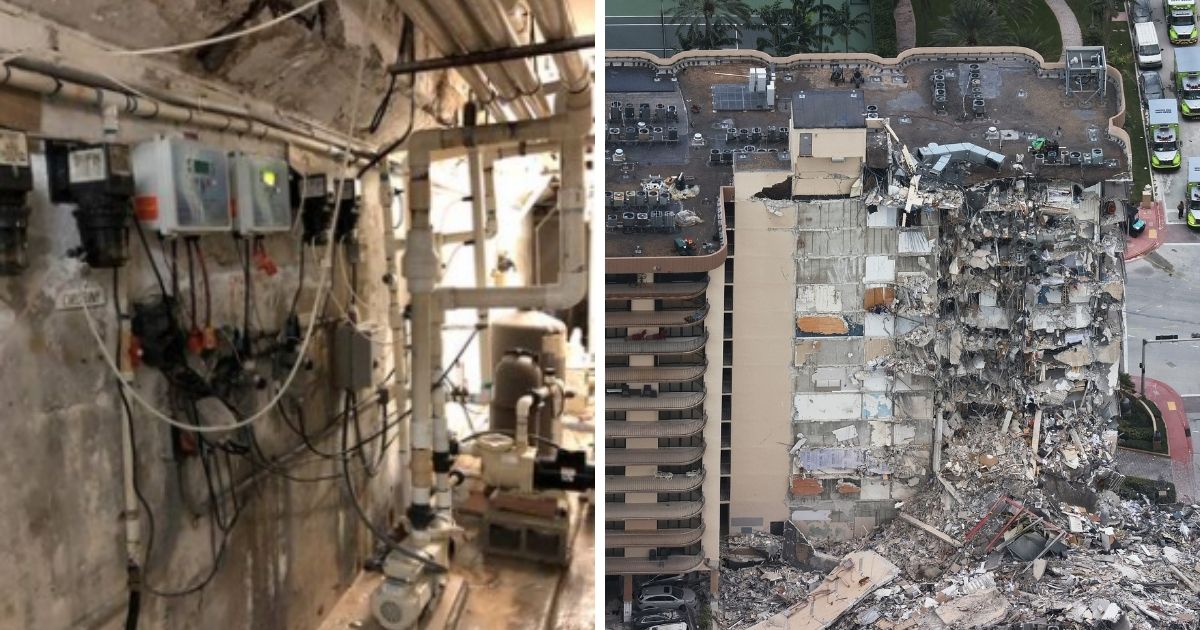 A series of photos from a pool contractor taken just 36 hours before the collapse of the Champlain Towers condominium in Surfside, Florida, is the latest sign the tragedy may have been preventable.

The pictures, first reported on by the Miami Herald on Monday, showed “cracking concrete and severely corroded rebar under the pool,” the paper reported.

The contractor, who asked not to be named, told the Herald the lobby and pool area looked fine during the June 22 visit. However, he said that while he’d “gone in some scary places” during his decades of work, the lack of maintenance below the pool level troubled him.

“There was standing water all over the parking garage,” the contractor said.

In disasters like Surfside, there’s always someone who saw it coming:
https://t.co/p930LcfevE

The contractor, there to put together a bid on renovating the pool area at the 40-year-old complex, said he was so struck by the standing water he mentioned it to a staff member named Jose.

“He thought it was waterproofing issues,” the contractor said. “I thought to myself, ‘that’s not normal.’”

The biggest puddle was apparently under parking spot 78, where a 2018 inspection report by an engineer indicated there was a “major error” that allowed water to enter and cause damage to the concrete slabs underneath the building.

“In the pool equipment room, located on the south side of the underground garage, the contractor saw another problem — exposed and corroding rebar in the concrete slab overhead,” the Miami Herald reported.

“He snapped some pictures and sent them to his supervisor along with a note expressing concern that the job might be a bit more complicated than expected. He worried they would have to remove pool pipes to allow concrete restoration experts access to repair the slabs.”

“I wonder if this was going on in other parts of the building and caused this collapse,” he told the newspaper.

WOW! Pool contractor was so shocked at the deterioration of the Surfside, FL condo that he took pictures before it collapsed (MY EDITS) to show his boss. Missing concrete, exposed rebar in pool equipment room. @wlwt @wdtn #SurfsideBuildingCollapse #ChamplainTowers #BreakingNews pic.twitter.com/7F5GEsbMlZ

Mohammad Ehsani, an engineer and concrete expert who reviewed the pictures, told the Herald it was the worst damage he’d seen documented in the building so far.

“You can see extensive corrosion of the rebars at the bottom of the beam. That is very serious,” Ehsani said, according to the newspaper.

The equipment room runs along the southern wall of the building — an area that did not collapse. But the images could indicate problems elsewhere.

“If the condition of the beam in the pool guy’s photo is something that was also happening under the building, that is a really major concern,” Ehsani said.

He added that if that occurred, it could “absolutely” cause the condo to collapse.

There was a major caveat, though.

Ehsani, the Herald reported, “cautioned against rushing to conclude that all beams in the building showed similar levels of damage to those exposed to chemicals from the pool. The 2018 report that documented “severe” structural damage to concrete in the garage under the pool deck did not include photos of anything nearly as alarming as what the pool contractor documented, Ehsani said.”

The 2018 report that found the “major issues” was released to the public Friday, according to the Tampa Bay Times.

Frank Morabito of Morabito Consultants wrote that the “main issue” with the drainage was that the pool deck was “laid on a flat structure,” one that prevented water drainage. He added that there was inadequate waterproofing, “a systemic issue” that went back to an error “in the development of the original contract documents.”

“Several sizable [cracks in the concrete] were noted in both the topside of the entrance drive ramp and underside of the pool/entrance drive/planter slabs, which included instances with exposed, deteriorating rebar,” the report stated, according to the Tampa Bay Times.

Jose, the condo employee that the contractor talked to, said that the waterproofing was so bad and pool pumping so frequent they had to replace the pump motors every two years, the contractor told the Herald. A Champlain Towers maintenance manager from the late-1990s also told WFOR-TV that seawater would get in there so often that “the pumps never could keep up with it.”

Less than three months ago, Jean Wodnicki, the president of the condominium association emailed residents the damage had “gotten significantly worse” since the 2018 report, according to The New York Times.

“When you can visually see the concrete spalling (cracking), that means that the rebar holding it together is rusting and deteriorating beneath the surface,” Wodnicki wrote, The Times reported.

“The concrete deterioration is accelerating. The roof situation got much worse,” she wrote. “New problems have been identified.”

“A lot of this work could have been done or planned for in years gone by,” she added. “But this is where we are now.”

As it turns out, three months later we’re now in a far different — and much worse place.