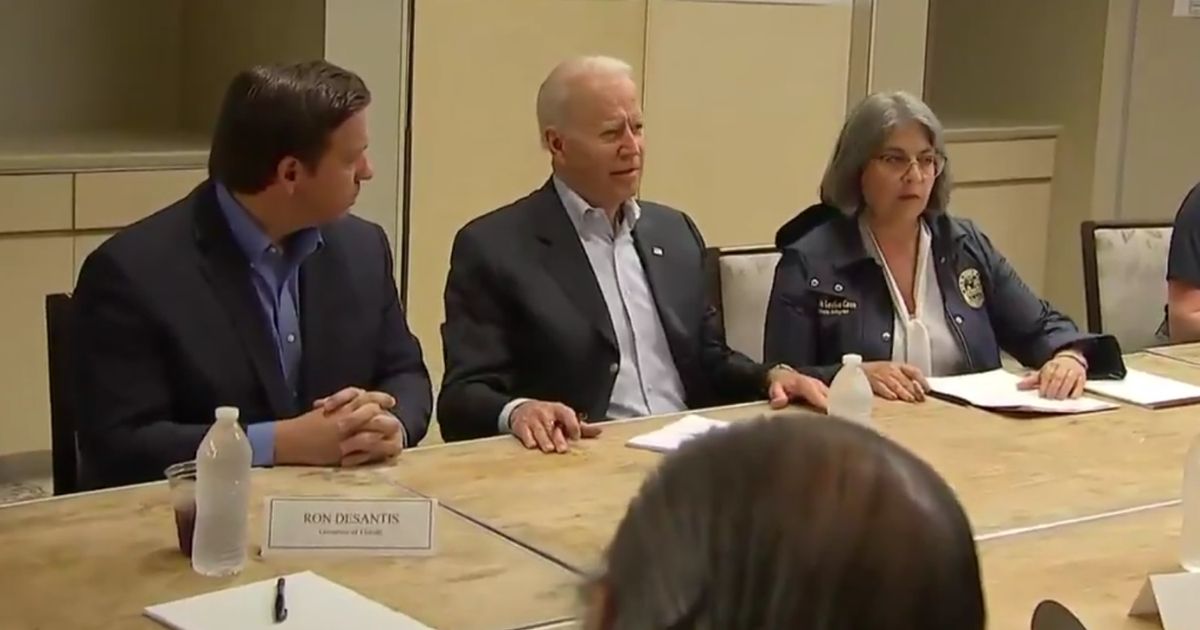 The following article, Biden Issues Tone-Deaf 'Silver Lining' Remark on Florida Tragedy: 'You Know What's Good About This?', was first published on Flag And Cross.

Leave it to President Joe Biden to turn a national tragedy into an opportunity for self-adulation.

The tragedy occurred early on the morning of June 24, when a portion of a shorefront condominium located in a Miami, Florida, suburb collapsed — leaving over 100 people dead or missing — according to WPLG-TV.

As of Thursday afternoon, 18 people have been confirmed dead in the wreckage and 145 remain unaccounted for, ABC News reported. The outlet noted that 139 people who were living or staying in the building at the time of the collapse have been accounted for and are safe.

When asked to comment on the emergency situation on June 24, Biden had to be reminded about the tragedy even though it had just occurred that morning.

Such behavior is par for the course for someone that has repeatedly exhibited dementia symptoms.

“Oh, yes, I apologize … yes, thank you …,” Biden stumbled, when reporters threw out questions concerning the federal response to the building collapse.

After first chuckling about his inability to remember the horrific tragedy, the best Biden could offer when actually in Florida one week later was an incredibly tone-deaf rhetorical question.

“You know what’s good about this?” Pres. Biden says during a briefing on the Surfside building collapse search and rescue response. “It lets the nation know we can cooperate…that’s really important.” https://t.co/FAm1DMXRA8 pic.twitter.com/pbtreq39RM

“You know what’s good about this?” Biden asked as he sat among state leaders during a briefing on the situation.

“It lets the nation know we can cooperate. That’s really important,” the president slurred.

In contrast, GOP Florida Gov. Ron DeSantis, the man Biden may face off with in the 2024 presidential race, reacted as a politician should.

This couple has 5 family members still missing. DeSantis just spoke with them, and they embraced. @winknews pic.twitter.com/fYfwSqBfty

“We just toured around the complex to be able to see, and the TV doesn’t do it justice,” DeSantis said during a news conference the day of the collapse, according to a Rev transcript of the briefing. “I mean, it is really, really traumatic to see the collapse of massive structure like that.”

Since the horrific event, the governor has comforted the families of victims unaccounted for, signed the requisite executive orders and spoken with the media without patting himself on the back.

That is exactly the kind of leadership sorely needed in the White House right now.

Instead, we’re stuck with Joe Biden.

Over 100 men, women and children are dead or missing, and our president is busy grandstanding about how he can act like an adult.

WHAT CAN YOU SAY……..BIDEN IS AN IDIOT

And he’s also senile, but he’s what the democrats wanted to elect as president, or to the senate as joe believes??