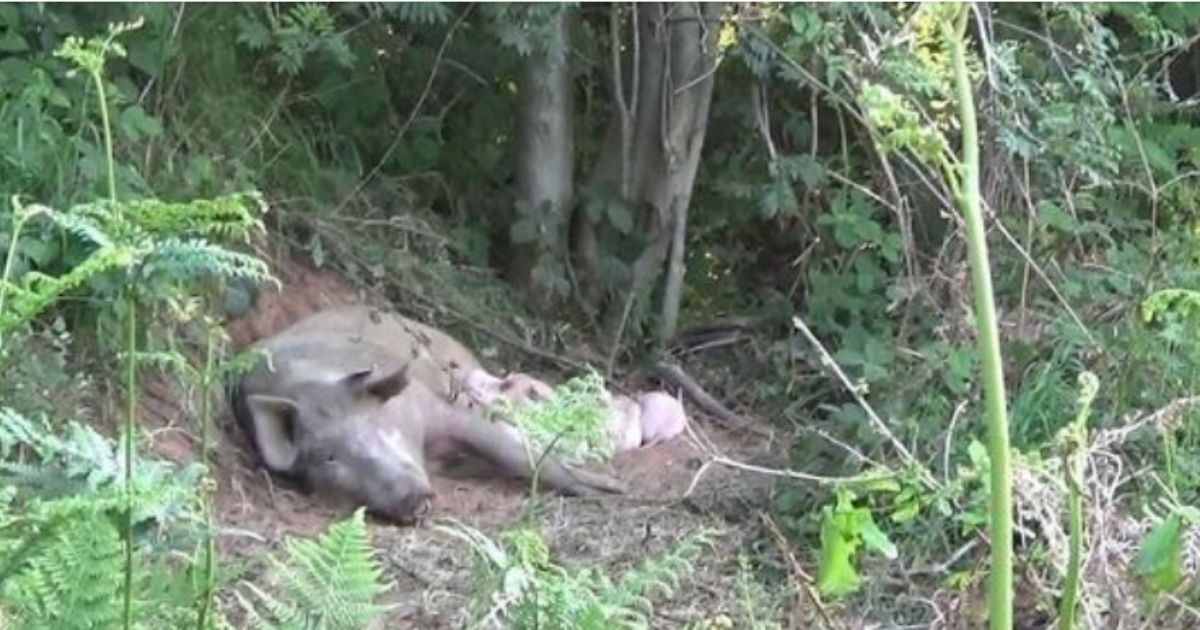 The following article, After Pregnant Pig Escapes Farm and Gives Birth in the Woods, Public Steps in to Save Piglets from Slaughter, was first published on Flag And Cross.

On June 14, Anna Aston was out walking a dog in Ollerton, England, when she spotted something unusual in the woods: a large pig and its litter of piglets.

“I knew they weren’t wild boar; they just looked like ordinary pigs,” she told the BBC. “I was thinking, ‘This isn’t right.’ You just don’t get them in a wood.”

She contacted Brinsley Animal Rescue in hopes that something could be done for the pigs. It was clear to her and other rescuers that the mother pig had escaped from a commercial farm and had run away to have her babies — a story that touched Aston and many others who soon became very concerned with the pig’s plight.

“Wherever she has come from, she deserves a safe and happy life with her little family,” Aston continued. “I think she has earned her freedom now.”

The problem was, the pig belonged to a farmer. Without permission, removing the pig to a rescue could be branded an act of theft, something Jon Beresford, who runs the sanctuary, was quick to point out.

A petition was started to locate the owner of the pig and make a plea for her freedom. In the meantime, volunteers went out to feed the pig (who was dubbed “Matilda”), as she had a ring in her nose that prevented her from foraging.

Those who worked with her emphasized how good a mother she was, and thousands of people signed the petition.

“It’s almost like her maternal instincts are like ‘I want to get out of here and have my babies’ and she has broken out,” Beresford said.

“They are appealing to the farmer to let her be rescued as she has shown such bravery, determination and strong love for her babies,” the petition page states. “The dog walker was quoted as saying ‘she has earnt her freedom now’ and we couldn’t agree more.

“Brinsley and Surge are appealing to find the farmer and Louise Smith has said ‘We are really hopeful the farmer allows us to commence the rescue and get Matilda and her family to a sanctuary where they can live out the rest of their natural lives.'”

According to an update by the BBC, three days after they were found, the farm collected the pigs. Eventually, however, they agreed to let the sanctuary keep Matilda and her brood if the rescue agreed to call off a demonstration that had been planned.

Many have breathed a collective sigh of relief as Matilda and her nine babies reached safety. Her rescuers have promised that she will only know love and care for the rest of her natural life.

“Matilda & her piglets have spent the first night of freedom with us resting,” the rescue posted on June 19. “She is such a good mother too them, now she no-longer needs to worry about their plight.

“Matilda will rear her piglets naturally, we’ll be getting the males castrated in time and when they are all fit and well and independent, we’ll be seeking life-long homes for them. We’ll keep you updated.”

The plan appears to be to move Matilda and her babies to Surge Sanctuary in about a month, where Matilda and four of her brood will live out their days. Once the piglets are weaned, vetted and castrated, the remaining five will be available to life-long pet homes.

“It’s such good news, it has made my day,” Aston, Matilda’s original finder, said upon hearing news of her rescue.

“I couldn’t stand the thought of them going back to wherever it was, and we all have a good idea of what would have happened to them.

“We can’t save all the pigs but I just felt that she had earned her freedom. She had the instinct — she needed to have the piglets somewhere safe and went and did that.”

Continue reading: After Pregnant Pig Escapes Farm and Gives Birth in the Woods, Public Steps in to Save Piglets from Slaughter ...