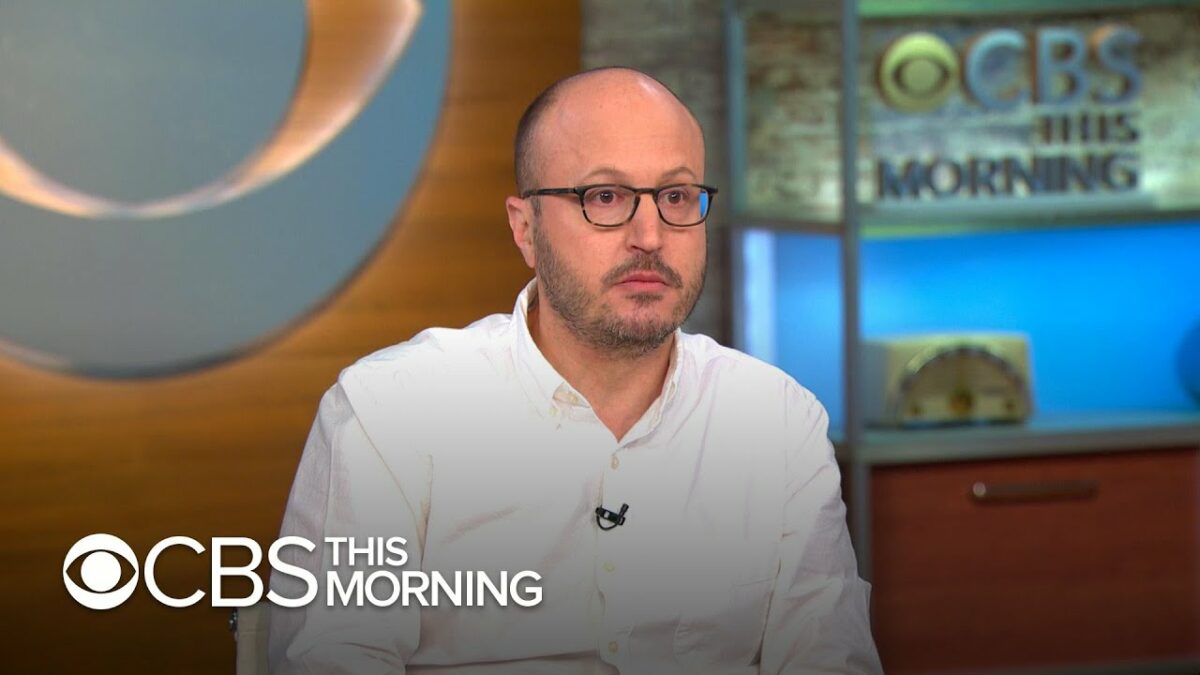 Author Roger Bennett has written a touching memoir about becoming an American citizen. On Tuesday, he read an excerpt from it on Liberty Island in the shadow of the Statue of Liberty in commemoration of the Fourth of July on “CBS This Morning” — a patriotic moment in the run-up to the 245th anniversary of us giving the British what for, made even stirring by the fact it was delivered by a Britisher.

Then the clip was over, and “CBS This Morning” co-host Gayle King decided the first thing she needed to ask Bennett about was his “tiny child penis.”

But let’s back up. Roger Bennett is best known as one half of “Men in Blazers,” objectively the best soccer podcast there is. The duo also hosts an NBC Sports show.

Bennett’s also a frequent contributor to “Morning Joe.” The podcast is good enough that I’m still willing to tolerate “Men in Blazers” in spite of that, which should give you an idea of the kind of quality programming we’re talking about here.

Bennett, a Liverpudlian by birth, has written a memoir about how he became an American citizen titled “(Re)born in the USA: An Englishman’s Love Letter to His Chosen Home.”

On Tuesday, he read excerpts that described the “bloke who grew up in the murk of 1980s England” who called the United States “a light in the darkness” and “a place filled with possibility and promise.”

Bennett took solace in the iconography of American pop culture in the 1980s, from Walter Payton to the Beastie Boys to John Cougar Mellencamp.

He went on to say that “having lived in the United States for more than half my life now, I’m keenly aware that ‘The Love Boat,’ ‘Pretty in Pink’ and ‘Miami Vice’ are not the real America.”

The events of the last year, he continued, “have created the impression we’re a nation divided, chaotic and racked by fear.”

During the pandemic lockdown, Bennett said, he spent his time “digging deep into memories of an era when the United States felt very different. A beacon of such courage, tenacity and possibility. It gave me the confidence to chase those possibilities with the passion Tracy Chapman once sang about fast cars.”

“As such, this book is a love letter to America, written by a gent who came of age with the Statue of Liberty and the Manhattan skyline painted as a mural on his bedroom wall and ended up moving here. And for whom the act of becoming an American citizen is the single greatest achievement of my life.”

Back at the studio, Bennett was teary watching himself read that prose. Pretty intense stuff. (Bennett managed to get a laugh, however, by mentioning it was “like the first half of ‘Scarface.'”)

“So beautiful. It’s so beautiful,” Gayle King said before immediately bringing up “something that’s not so beautiful. You write on page 56 you were a ‘late bloomer with a tiny child penis that looked like a ball spigot.’”

This was a pleasant enough response, but come on — really? Bennett is celebrating his new country in soaring, emotional terms. That’s great, but can we talk about a ribald section of the book where he attempts some frank humor about his genitalia? That’s what’s actually important.

As an aside, is this what the audience watching “CBS This Morning” wants?

I remember America being slightly scandalized when then-President Bill Clinton was asked whether he wore boxers or briefs on MTV back in the 1990s. Now, as you mull about your kitchen in the morning, wondering whether a third K-cup will make you more productive or simply send you to the bathroom six times before noon, here’s Gayle King talking about an author’s “tiny child penis.”

It’s particularly salient when you look at the emotional, patriotic content of the segment, which clearly wasn’t intended to be super-jokey. Take Bennett describing what it was like becoming a naturalized citizen:

“If you have stood in a courtroom, for me 162 people from 42 countries, and you say the Oath of Allegiance, and you look left and right, you see people who have crawled through deserts, who’ve survived civil war, who have escaped turmoil driven by the idea of America, then you know that that idea of America in the world shines so bright, drives people, gives them incredible courage and joy,” Bennett said.

“And that’s my message for you on Independence Day.”

As Bennett celebrated and feted his adopted country, with all its flaws and in beautiful language, King’s takeaway was apparently limited to the tee-hee potty humor stuff. You can draw your own conclusion about how seriously she takes patriotism.

Gayle king is a hypocrite, racist, & spoiled brat! How rude & nasty she was to the beautiful hums being. Shameful behavior! She owes him an apology!!!!!!