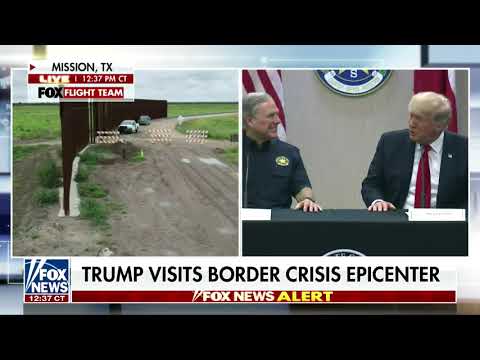 The following article, Fox News Cuts Trump Border Visit Feed After He Starts Talking About Election, was first published on Flag And Cross.

Fox News cut off its live coverage of former President Donald Trump’s remarks at the nation’s southern border on Wednesday after he began discussing his allegations of fraud in the 2020 election.

Despite heavy promotion of the event, the network abruptly returned to studio coverage after Trump claimed he had won the 2020 presidential election.

“We had an election where we did much better than we did the first time and amazingly we lost,” the former president said during his remarks.

“I just want to thank the people of Texas because we won in a landslide. It wasn’t even close,” Trump added.

“We got 12 million more votes than we got the first time,” he continued.

The former president’s audio was cut off by Fox News shortly after those comments, and the network continued coverage from its New York studio.

Raw Story captured the Fox News coverage change and posted it to YouTube.

Abbott posted a video Tuesday ahead of Trump’s visit to the nation’s southern border announcing a security briefing that would be streamed live on Facebook, despite Trump’s ban from the platform.

Securing the border is not just important to Texas—it is vital to America.

TOMORROW President Trump will join me and law enforcement officials for a border security briefing in Weslaco.

The livestream aired on the Office of the Governor Greg Abbott Facebook page.

The Facebook livestream was considered somewhat controversial, as the social media giant banned Trump following the events of Jan. 6 at the U.S. Capitol building.

Trump also published an Op-Ed on Wednesday blaming President Joe Biden for the “humanitarian catastrophe” he has caused with his immigration policies.

“When I was president, I delivered on my promise to build a border wall to protect our country. All Joe Biden had to do was paint it,” Trump said in The Washington Times article, which was headlined: “I built the wall; Biden built a humanitarian catastrophe.”

“Instead, Biden has enacted the most radical open borders agenda imaginable,” he added.

Maybe we should just boycott Fox News, and not buy anything they have advertised on their program. Who is in charge of this program? Which anchor was in charge of Fox News when President Trump was cut off? Come on tell us, so we can turn them off every time they come on in the future.

The way to hurt these people is to boycott their sponsors, en mass! Send letters to Fox and the sponsors telling them of your boycott, and why! The only way to get their attention is to hit them in their pocketbooks, hard. All it takes is couple of million people to take a few minutes to write a few letters, some paper, envelopes and stamps. A small price to pay to take out Country back from these inept imbeciles that we have stumbling around, trying to lead into oblivion!